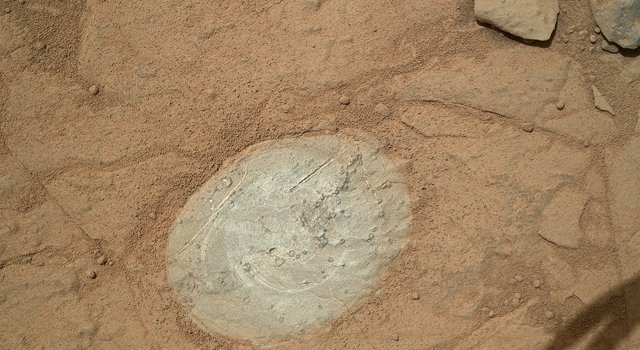 This image from the Mars Hand Lens Imager (MAHLI) on NASA's Mars rover Curiosity shows the patch of rock cleaned by the first use of the rover's Dust Removal Tool (DRT).› Full image and caption
Credit: NASA/JPL-Caltech/MSSS 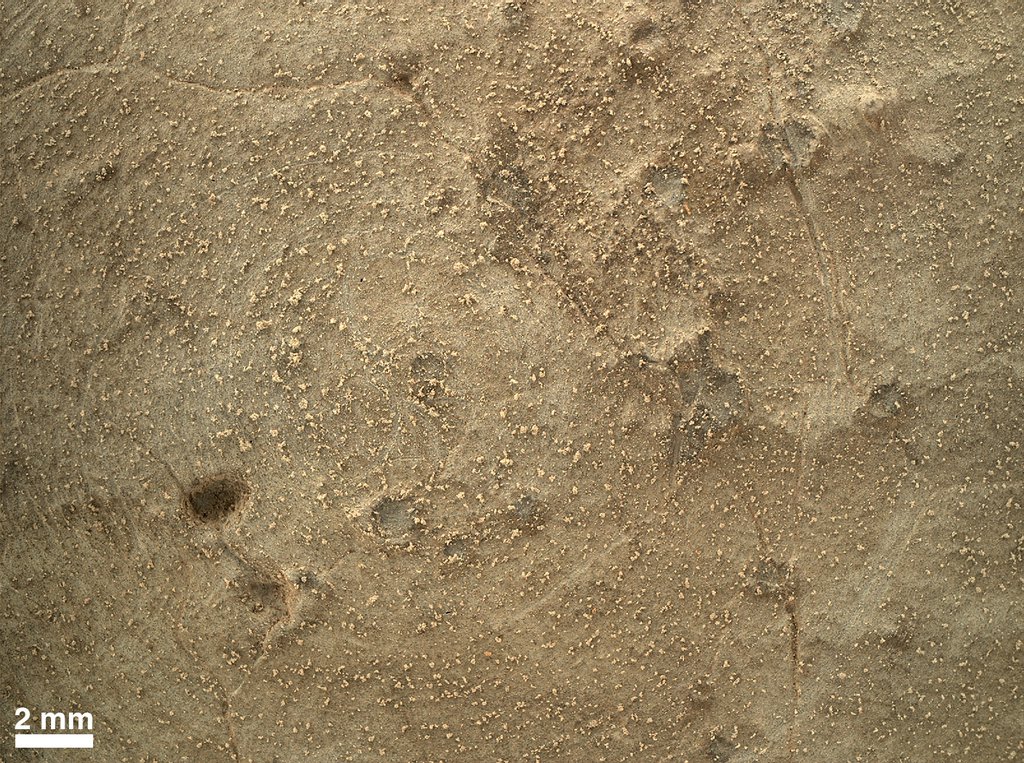 This image from the Mars Hand Lens Imager (MAHLI) on NASA's Mars rover Curiosity shows details of rock texture and color in an area where the rover's Dust Removal Tool (DRT) brushed away dust that was on the rock. This rock target, "Ekwir_1" was brushed and this image was recorded on the same Martian day, or sol, Sol 150 of Curiosity's mission on Mars (Jan. 6, 2013.)› Full image and caption
Credit: NASA/JPL-Caltech/MSSS

NASA's Mars rover Curiosity has completed first-time use of a brush it carries to sweep dust off rocks.

PASADENA, Calif. -- NASA's Mars rover Curiosity has completed first-time use of a brush it carries to sweep dust off rocks.

Nearing the end of a series of first-time uses of the rover's tools, the mission has cleared dust away from a targeted patch on a flat Martian rock using the Dust Removal Tool.

The tool is a motorized, wire-bristle brush designed to prepare selected rock surfaces for enhanced inspection by the rover's science instruments. It is built into the turret at the end of the rover's arm. In particular, the Alpha Particle X-ray Spectrometer and the Mars Hand Lens Imager, which share the turret with the brush and the rover's hammering drill, can gain information after dust removal that would not be accessible from a dust-blanketed rock.

Choosing an appropriate target was crucial for the first-time use of the Dust Removal Tool. The chosen target, called "Ekwir_1," is on a rock in the "Yellowknife Bay" area of Mars' Gale Crater. The rover team is also evaluating rocks in that area as potential targets for first use of the rover's hammering drill in coming weeks.

"We wanted to be sure we had an optimal target for the first use," said Diana Trujillo of NASA's Jet Propulsion Laboratory, Pasadena, Calif., the mission's activity lead for the Dust Removal Tool. "We need to place the instrument within less than half an inch of the target without putting the hardware at risk. We needed a flat target, one that wasn't rough, one that was covered with dust. The results certainly look good."