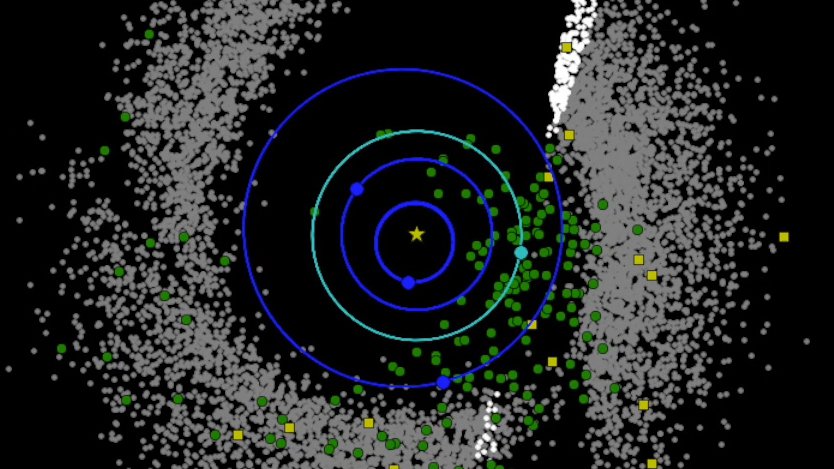 NASA's Near-Earth Object Wide-field Infrared Survey Explorer (NEOWISE) mission has released its third year of survey data, with the spacecraft discovering 97 previously unknown celestial objects in the last year. Of those, 28 were near-Earth objects, 64 were main belt asteroids and five were comets.

The spacecraft has now characterized a total of 693 near-Earth objects since the mission was re-started in December 2013. Of these, 114 are new. The NEOWISE team has released an animation depicting this solar system survey's discoveries and characterizations for its third year of operations.

"NEOWISE is not only discovering previously uncharted asteroids and comets, but it is providing excellent data on many of those already in our catalog," said Amy Mainzer, NEOWISE principal investigator from NASA's Jet Propulsion Laboratory in Pasadena, California. "It is also proving to be an invaluable tool in in the refining and perfecting of techniques for near-Earth object discovery and characterization by a space-based infrared observatory."

Near-Earth objects (NEOs) are comets and asteroids that have been nudged by the gravitational attraction of the planets in our solar system into orbits that allow them to enter Earth's neighborhood. Ten of the objects discovered by NEOWISE in the past year have been classified as potentially hazardous asteroids, based on their size and their orbits.

More than 2.6 million infrared images of the sky were collected in the third year of operations by NEOWISE. These data are combined with the Year 1 and 2 NEOWISE data into a single archive that contains approximately 7.7 million sets of images and a database of more than 57.7 billion source detections extracted from those images.

The NEOWISE images also contain glimpses of rare objects, like comet C/2010 L5 WISE. A new technique of modeling comet behavior called tail-fitting showed that this particular comet experienced a brief outburst as it swept through the inner-solar system.

"Comets that have abrupt outbursts are not commonly found, but this may be due more to the sudden nature of the activity rather than their inherent rarity," said Emily Kramer, a NASA Postdoctoral Program Fellow at JPL and lead author of paper on the NEOWISE study. "It is great for astronomers to view and collect cometary data when they find an outburst, but since the activity is so short-lived, we may simply miss them most of the time."

The tail-fitting technique identifies the size and quantity of dust particles in the vicinity of the comet, and when they were ejected from the comet's nucleus, revealing the history of the comet's activity. With tail-fitting, future all-sky surveys may be able to find and collect data on more cometary outburst activity when it happens. A paper detailing the tail-fitting technique and other results of the study was published in the March 20 volume of the Astrophysical Journal.

Originally called the Wide-field Infrared Survey Explorer (WISE), the spacecraft was launched in December 2009. It was placed in hibernation in 2011 after its primary astrophysics mission was completed. In September 2013, it was reactivated, renamed NEOWISE and assigned a new mission: to assist NASA's efforts to identify the population of potentially hazardous near-Earth objects. NEOWISE also is characterizing more distant populations of asteroids and comets to provide information about their sizes and compositions.

To review the latest data release from NEOWISE please visit: