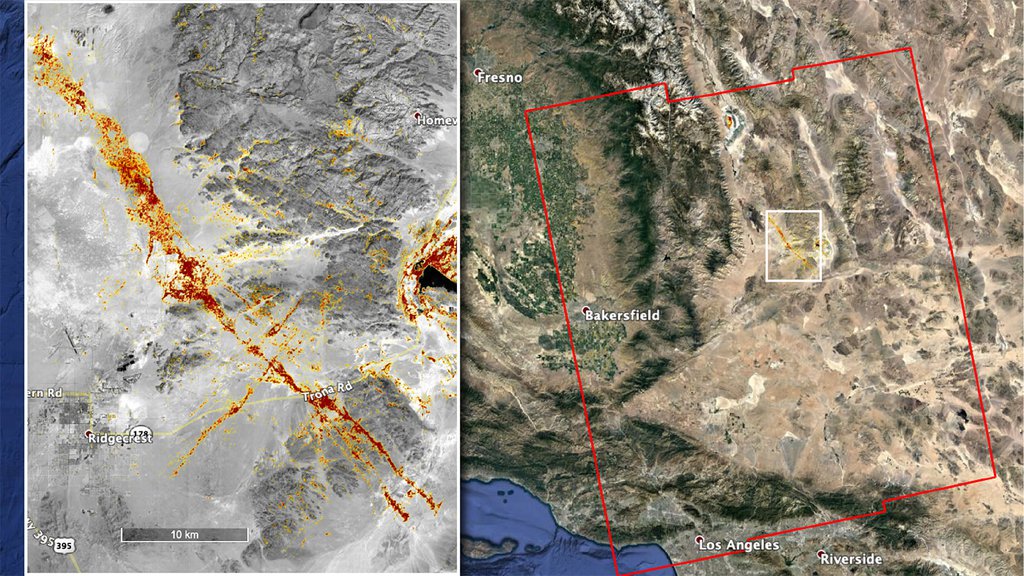 The mission produced a map of damage - the most substantial within a 6-mile area of Ridgecrest - caused by the pair of temblors that recently struck Southern California.

A week after two strong earthquakes struck near the city of Ridgecrest in Southern California, NASA scientists and engineers continue to analyze satellite data for information on fault slips and ruptures. Their observations are helping local authorities assess damage and will also provide useful information to engineers for designing resilient structures that can withstand ruptures like the ones created by the latest quakes.

The Advanced Rapid Imaging and Analysis (ARIA) team at NASA's Jet Propulsion Laboratory in Pasadena, California, created this map depicting areas that are likely damaged as a result of the recent major earthquakes. The color variation from yellow to red indicates increasingly more significant surface change, or damage. The map covers an area of 155 by 186 miles (250 by 300 kilometers), shown by the large red polygon. Each pixel measures about 33 yards (30 meters) across.

To make the map, the team used synthetic aperture radar (SAR) images from the European Space Agency's Copernicus Sentinel-1 satellites from before and after the sequence of quakes - July 4 and July 10, 2019, respectively. The map may be less reliable over vegetated areas but can provide useful guidance in identifying damaged areas.

NASA's Disasters Program is in communication with the California Earthquake Clearinghouse, which is coordinating response efforts with the California Air National Guard, the U.S. Geological Service and the Federal Emergency Management Agency. NASA analysts are using data from satellites to produce visualizations of land deformation and potential landslides, among other earthquake impacts, and are making them available to response agencies. NASA's Disasters Program promotes the use of satellite observations in predicting, preparing for, responding to and recovering from disasters around the world.