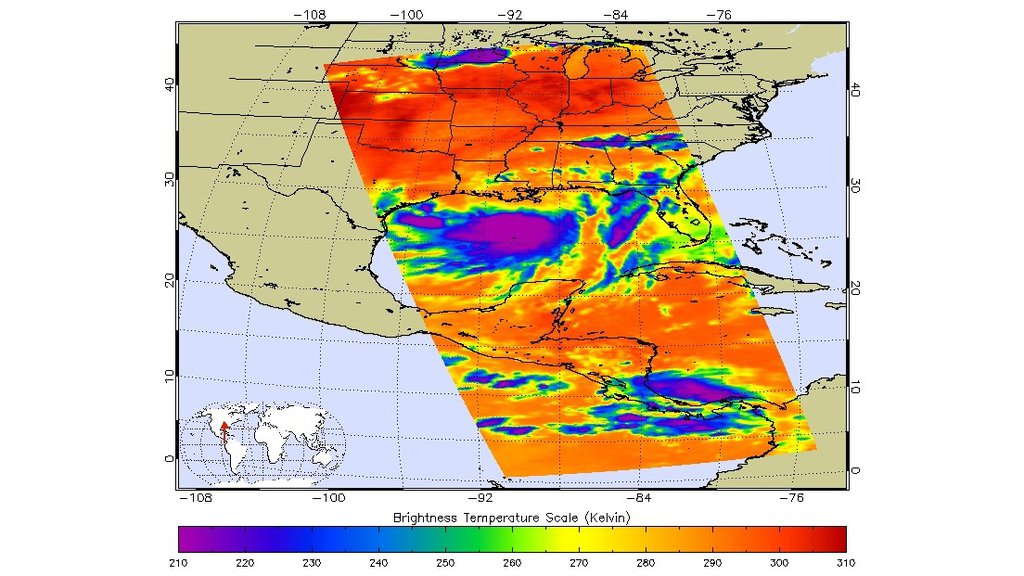 NASA's AIRS instrument imaged Tropical Storm Barry on the afternoon of July 12, 2019, a day before the storm is expected to make landfall on the Louisiana Coast.› Full image and caption
Credit: NASA/JPL-Caltech

The Atmospheric Infrared Sounder aboard the Aqua satellite captured the storm as it was just south of Louisiana at around 2 p.m. local time.

NASA's Atmospheric Infrared Sounder (AIRS), aboard the Aqua satellite, captured imagery of Tropical Storm Barry in the Gulf of Mexico at about 2 p.m. local time on Friday afternoon. According to the National Hurricane Center, Barry is expected to make landfall over the Louisiana coast on Saturday, likely as a hurricane.

In the infrared AIRS image, the large purple area indicates very cold clouds that have been carried high into the atmosphere by deep thunderstorms. These clouds are associated with heavy rainfall. Warmer areas with shallower rain clouds are shown in blue and green. And the orange and red areas represent mostly cloud-free air.

At the time the image was captured, Barry had maximum sustained winds of 65 mph (105 kph). When the storm reaches maximum sustained winds of 74 mph (119 kph), it will be upgraded to hurricane status. The National Hurricane Center notes that the slow movement of the storm will result in long periods of heavy rain, dangerous storm surge and flooding in parts of the central Gulf Coast into the Lower Mississippi Valley.