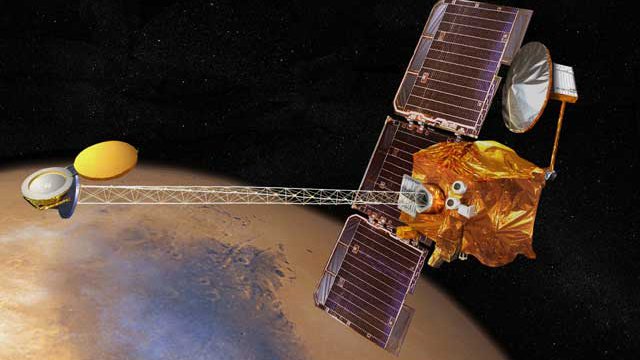 Odyssey was launched April 7 from Cape Canaveral Air Force Station, Fla. Other than our Moon, Mars has attracted more spacecraft exploration attempts than any other object in the solar system, and no other planet has proved as daunting to success. Of the 30 missions sent to Mars by three countries over 40 years, less than one-third have been successful.

To enter orbit, Odyssey's propellant tanks, the size of big beachballs, must first be pressurized, plumbing lines heated, and the system primed before 262.8 kilograms (579.4 pounds) of propellant is burned in exactly the right direction for 19.7 minutes.

Flight controllers at JPL will see the main engine burn begin a few seconds after 7:26 p.m. Pacific time on the evening of Oct. 23. (Events in space are usually measured in Universal Time -- formerly called Greenwich Mean Time -- under which the Mars arrival occurs on Oct. 24. In the United States, however, the arrival will take place the evening of Oct. 23.)

The spacecraft will pass behind the planet 10 minutes later and will be out of contact for about 20 minutes. The burn is expected to end at 7:46 p.m. Pacific time, but controllers will not receive confirmation until a few minutes later when the spacecraft comes out from behind Mars and reestablishes contact with Earth at about 8 p.m.

The firing of the main engine will brake the spacecraft's speed, slowing and curving its trajectory into an egg-shaped elliptical orbit around the planet. In the weeks and months ahead, the spacecraft will repeatedly brush against the top of the atmosphere in a process called aerobraking to reduce the long, 19-hour elliptical orbit into a shorter, 2-hour circular orbit of approximately 400 kilometers (about 250 miles) altitude desired for the mission's science data collection.

NASA's latest explorer carries several scientific instruments to map the chemical and mineralogical makeup of Mars: a gamma ray spectrometer that includes a neutron spectrometer and a high-energy neutron detector; a thermal-emission imaging system; and a Martian radiation environment experiment.