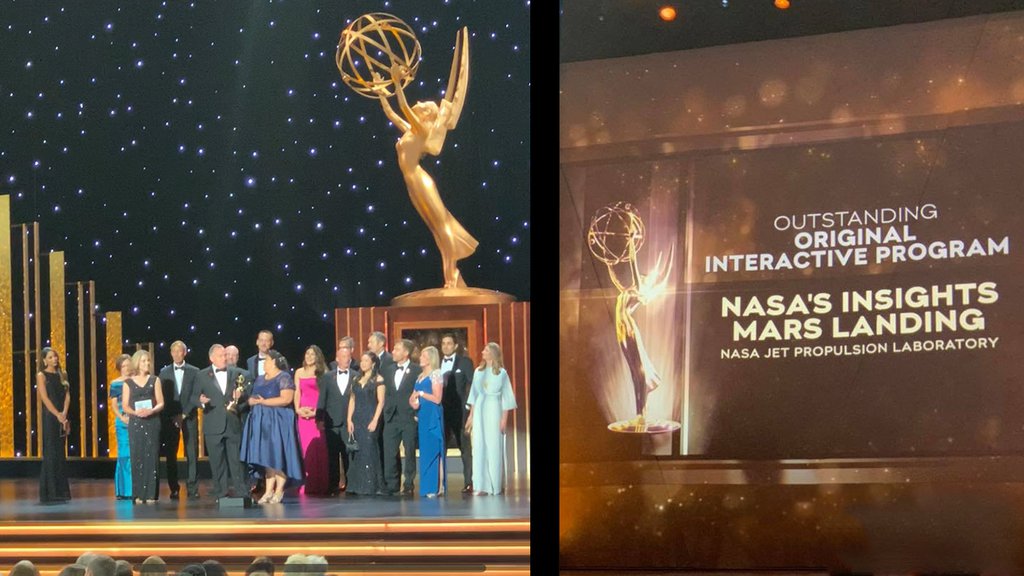 Team members JPL's Public Engagement and Digital News offices gather onstage with those of the Mars InSight mission and with JPL deputy director Larry James at the 2019 Creative Arts Emmy Awards on Sunday, Sept. 15, 2019, where they won for Outstanding Original Interactive Program. The awards were held at the Microsoft Theater in Los Angeles.
Credit: NASA/JPL-Caltech

NASA-JPL's coverage of the Mars InSight landing earns one of the two wins, making this the NASA center's second Emmy.

NASA's efforts to engage a broader audience in exploration through the use of social media and online features was recognized with two Emmy Awards for interactive programming this weekend. During ceremonies held Sept. 14-15 at the Microsoft Theatre in Los Angeles, the Academy of Television Arts & Sciences recognized NASA for its coverage of a Mars mission and the agency's first test of a spacecraft that will help bring crewed launches to the International Space Station back to U.S. soil.

NASA Administrator Jim Bridenstine tweeted, "Congrats to all involved and those who help tell the @NASA story every day!"

Part of the Creative Arts Emmys, the awards went out as follows:

On Sept. 14, a team from NASA's Kennedy Space Center and SpaceX won in the category of Outstanding Interactive Program for multimedia coverage of Demonstration Mission 1, a test flight of the SpaceX Crew Dragon to the International Space Station - the first human-rated spacecraft to lift off from U.S. soil since the end of the Space Shuttle program in 2011.

Demonstration Mission 1 was made possible by NASA's Commercial Crew Program, which is paving the way for commercial transport of astronauts to the space station while the agency looks forward to deep space missions to the Moon and Mars. The nomination was the result of years of preparation for the historic launch and multiple live broadcasts from NASA and SpaceX facilities across the country during each phase of the Crew Dragon's mission to the International Space Station and its stunning return to Earth. Throughout NASA's coverage, the agency and SpaceX engaged social media users around the world and at local social media influencer gatherings at NASA's Kennedy Space Center in Florida.

An edited version of the two ceremonies will air on FXX Sept. 21. Selected Creative Arts Emmys will be shown as part of the live 71st Primetime Emmys broadcast on Sept. 22, which will air on Fox at 5 p.m. PDT (8 p.m. EDT).