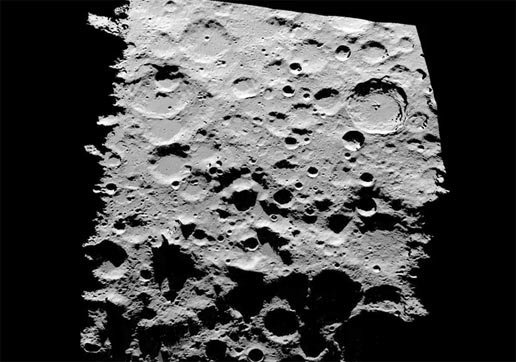 This movie is a simulation of the amount of solar illumination in the south polar region of moon over a solar day generated using high resolution topography.+ Play animation (Quicktime - 1.6Mb) 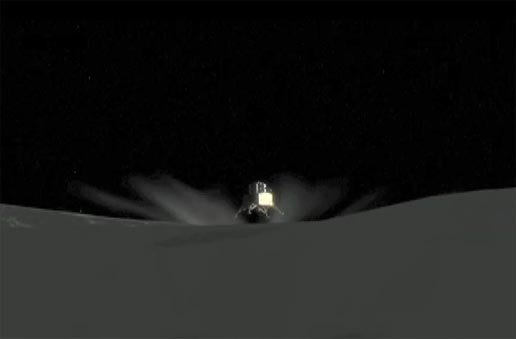 This animation utilizes the latest terrain data of the moon's south pole region in the generation of a animation of what a future moon crew could see during a descent to the rim of Shackleton Crater.+ Play animation (Quicktime - 2.8Mb)

NASA has obtained the highest resolution terrain mapping to date of the moon's rugged south polar region, with a resolution to 20 meters (66 feet) per pixel.

PASADENA, Calif. - NASA has obtained the highest resolution terrain mapping to date of the moon's rugged south polar region, with a resolution to 20 meters (66 feet) per pixel. Scientists at NASA's Jet Propulsion Laboratory, Pasadena, Calif., collected the data using the Deep Space Network's Goldstone Solar System Radar located in California's Mojave Desert. The imagery generated by the data has been incorporated into animation depicting the descent to the lunar surface of a future human lunar lander and a flyover of Shackleton Crater.

The mapping data collected indicate that the region of the moon's south pole near Shackleton Crater is much more rugged than previously understood. The Shackleton rim area is considered a candidate landing site for a future human mission to the moon.

"The south pole of the moon certainly would be a beautiful place to explore," said Doug Cooke, deputy associate administrator for the Exploration Systems Mission Directorate at NASA Headquarters, Washington. "We now know the south pole has peaks as high as Mt. McKinley and crater floors two and a half times deeper than the Grand Canyon. There are challenges that come with such rugged terrain, and these data will be an invaluable tool for advance planning of lunar missions."

Three times during a six-month period in 2006, scientists targeted the moon's south polar region using Goldstone's 70-meter (230-foot) radar dish. The antenna, three-quarters the size of a football field, sent a 500-kilowatt-strong, 90-minute-long radar stream 373,046 kilometers (231,800 miles) to the moon. The radar bounced off the rough-hewn lunar terrain over an area measuring about 644 kilometers by 402 kilometers (400 miles by 250 miles). Signals were reflected back to two of Goldstone's 34-meter (112-foot) antennas on Earth. The roundtrip time, from the antenna to the moon and back, was about two-and-a-half seconds.

"I have not been to the moon, but this imagery is the next best thing," said Scott Hensley, a scientist at JPL and lead investigator for the study. "With these data we can see terrain features as small as a house without even leaving the office."

NASA's Lunar Reconnaissance Orbiter will provide the next generation of lunar imaging and data. The spacecraft is scheduled to launch in late 2008. The Lunar Reconnaissance Orbiter Camera will retrieve high-resolution images of the moon's surface and lunar poles with resolutions to 1 meter (3.3 feet). These images will provide knowledge of polar illumination conditions, identify potential resources and hazards, and enable safe landing site selection. Other instruments aboard the orbiter will return data such as temperature maps, ultraviolet images, characterization of radiation on the moon and a high-resolution 3-D map. NASA's quest for up-to-date imagery of the moon also will benefit from international missions such as Japan's Selene robotic probe.

Funding for the program was provided by NASA's Exploration Systems Mission Directorate.

To view animation, terrain maps of the moon's south pole and images from this story, visit: http://www.nasa.gov/mission_pages/exploration/mmb/022708.html .

JPL manages the Goldstone Solar System Radar and the Deep Space Network for NASA. To learn more about them, visit: http://deepspace.jpl.nasa.gov/dsn .

For information about NASA's exploration program to return humans to the moon, visit: http://www.nasa.gov/exploration .