These images show the sunlit side of Earth in 10 different wavelengths of light that fall within the infrared, visible and ultraviolet ranges; the images are representational-color, because not all of these wavelengths are visible to the human eye. Each wavelength highlights different features of the planet -- for example, the continent of Africa is visible in the lower right image, but is nearly invisible in the upper left image. These observations were obtained by NASA's Earth Polychromatic Imaging Camera (EPIC) instrument onboard the National Oceanic and Atmospheric Administration's Deep Space Climate Observatory, or DSCOVR, satellite, on Aug. 2, 2017.
Credit: NASA/NOAA

A new study uses Earth as a stand-in for an exoplanet and shows that even with very little light -- as little as one pixel -- it is still possible to measure key characteristics of distant worlds.

The study of exoplanets -- planets that lie outside our solar system -- could help scientists answer big questions about our place in the universe, and whether life exists beyond Earth. But, these distant worlds are extremely faint and difficult to image directly. A new study uses Earth as a stand-in for an exoplanet, and shows that even with very little light -- as little as one pixel -- it is still possible to measure key characteristics of distant worlds.

The new study uses data from NASA's Earth Polychromatic Imaging Camera (EPIC) instrument, which is onboard the National Oceanic and Atmospheric Administration's Deep Space Climate Observatory, or DSCOVR, satellite. DSCOVR goes around the Sun at Lagrange point 1, a specific orbit that provides EPIC with a constant view of our home planet's sunlit surface. EPIC has been observing Earth continuously since June 2015, producing nuanced maps of the planet's surface in multiple wavelengths, and contributing to studies of climate and weather.

The EPIC instrument captures reflected light from Earth in 10 different wavelengths, or colors. So, each time EPIC "takes a picture" of Earth, it actually captures 10 images. The new study averages each image into a single brightness value, or the equivalent of one "single-pixel" image for each wavelength. A single, one-pixel snapshot of the planet would provide very little information about the surface. But in the new study, the authors analyzed a data set containing single-pixel images taken multiple times per day, in 10 wavelengths, over an extended period. Despite the fact that the entire planet had been reduced to a single point of light, the authors were able to identify water clouds in the atmosphere and measure the planet's rotation rate (the length of its day). The authors say the study, in the June 27 issue of the Astrophysical Journal, demonstrates that the same information could be derived from single-pixel observations of exoplanets.

This artist's illustration shows an enhanced-color image of Earth from NASA's Earth Polychromatic Imaging Camera (EPIC) instrument (top). EPIC observes the planet in 10 wavelength bands, shown here as 10 representational-color images (middle). A new study averages data from each EPIC wavelength band down into a single brightness value, or the equivalent of one "single-pixel" image. This allowed the study authors to simulate observations of a distant exoplanet. Credit: NASA/NOAA/JPL-Caltech
› Larger view

"The benefit of using Earth as a proxy for an exoplanet is that we can verify our conclusions derived from the single-pixel data with the wealth of data that we actually have for Earth -- we can't do that if we're using data from a distant, actual exoplanet," said Jonathan Jiang, an atmospheric and climate scientist at NASA's Jet Propulsion Laboratory in Pasadena, California, and lead author on the new study.

A tiny point of light

When Jiang's daughter, Teresa, was in elementary school, he organized a star-observing event for her and her friends. Jiang pointed to the stars, and told his daughter that the Sun is also star, and that there are planets orbiting other stars just as planets orbit the Sun. She pressed her father for more information, asking how scientists could possibly learn about those distant worlds from such tiny points of light in the sky.

"Kids ask a lot of good questions," Jiang said. "And that question stuck in my mind -- if I can see an exoplanet as only a tiny point of light, can I see clouds and oceans and land?"

Jiang began his career in astrophysics, but for his PhD work, he decided to apply his computer and physical modeling skills to Earth's climate. Now, he's using climate data to assist the study of exoplanets. Exoplanets are significantly dimmer than stars and much more difficult to detect. Earth, for example, is about 10 billion times fainter than the Sun. Only about 45 exoplanets have been discovered by direct imaging, all of which are much larger than Earth. The majority of known exoplanets (over 3,700 have been confirmed) were detected indirectly, using techniques such as the transit method, in which scientists observe the slight dimming of a star caused by the transit of an exoplanet across the face of the star.

This image shows the sunlit side of Earth, observed in 10 wavelengths by the EPIC instrument aboard the DSCOVR satellite. Each image shows the same snapshot of Earth in a different wavelength. The specific wavelength bands are indicated above each image. Credit: NASA/NOAA
› Larger view

The new study shows that by observing a planet with distinct features over time -- such as oceans and continents -- it is possible to measure the planet's rotation rate by observing a repeating pattern in the reflected light. This pattern would arise from those planetary features moving into view with a regular cadence. For example, every 24 hours, Australia and the Pacific Ocean fills EPIC's field of view, and about 12 hours later South America and the Atlantic fill the frame, with Africa and the Indian Ocean passing by in between. This pattern of changing light would repeat day after day. In the new paper, the authors show that they can detect this repeating cycle and thus determine the rotation rate, or the length of the planet's day. The rotation rate of a planet can reveal information about how and when the planet formed, and is a particularly difficult property to measure with current methods.

This animation shows a series of observations taken by the EPIC instrument in one of 10 wavelengths. At this wavelength, the distinction between continents and oceans is particularly visible. The repeating pattern created by the planet's rotation could be observable to a powerful telescope observing the planet from many light years away, according to a new study. Credit: NASA/NOAA
› Larger view

"People have been talking for some time about using this approach to measure the rotation rate of exoplanets, but there's been no demonstration that it could work because we didn't have any real data," said Renyu Hu, an exoplanet scientist at JPL and a coauthor on the new study. "We've shown that in every wavelength, the 24-hour period appears, which means this approach to measuring planet rotation is robust."

The authors note, however, that the effectiveness of this method would depend on the unique features of the planet. A daily-cycle pattern might not be visible on a planet that is largely homogenous over its surface. Venus, for example, is covered in thick clouds and has no oceans on its surface, so a recurring daylong pattern might not appear, or might not be distinct enough to observe in a one-pixel image. Planets like Mercury and Mars would also be challenging, but Jiang said planetary features like craters could also contribute to a pattern that could be used to measure the rotation period.

Previous studies used Earth as a proxy for exoplanets, to investigate what kinds of planetary properties could be derived from afar, but no previous studies looked at so many wavelength bands. This is also the first such study to capture such a large data set, taken over an extended period of time: it used more than 27 months of observations, with images taken by EPIC about 13 times per day. 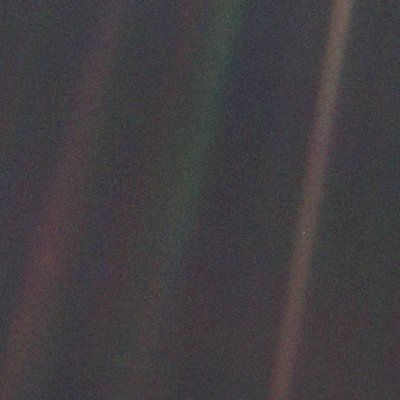 This image, taken by NASA's Voyager 1 spacecraft from beyond the orbit of Neptune, shows planet Earth as seen from about 3.7 billion miles (5.9 billion km) away. Earth appears as a very small point of light in the right half of the image, indicated by an arrow. Dubbed the "Pale Blue Dot," the image illustrates just how small an Earth-sized planet appears from far away. Credit: NASA/JPL-Caltech
› Larger view

Direct observations of exoplanets have far less data than what was used in the new study, but the researchers report that to measure the rotation rate of an exoplanet with more than 90 percent confidence would require taking images only two to three times per orbital period (that is, per "day" on that particular exoplanet) for about seven orbital periods.

The amount of time astronomers would have to observe an exoplanet to identify its rotation rate also depends on how much unwanted light is included in the exoplanet data. The EPIC data provide an exceptionally clear view of Earth, largely unfettered by light from other sources. But one primary challenge in directly imaging exoplanets is that they are so much dimmer than their parent stars. The light from the nearby star can easily drown out the light from an exoplanet, rendering the latter invisible. With the signal from the planet competing with light from the star, it may take longer to discern a pattern that could reveal the planet's rotation rate. NASA is investigating potential designs for next-generation telescopes that might be able to directly image Earth-size exoplanets.

With the field of exoplanet direct imaging moving ahead, Jiang is not done thinking about the question his daughter asked him more than a decade ago. If scientists can learn about the surface features of distant planets, then could they answer an even bigger question that his daughter posed -- do any of those planets host life?