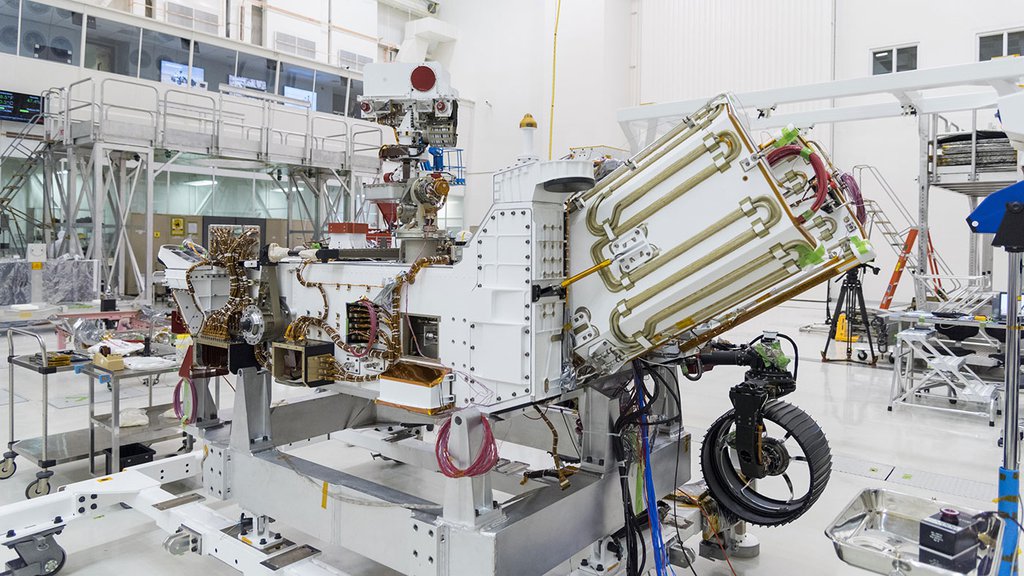 The electricity needed to operate NASA's Mars 2020 rover (pictured here) is provided by a power system called a Multi-Mission Radioisotope Thermoelectric Generator, or MMRTG. Not pictured in this image, the MMRTG will be placed in the aft of the rover.› Full image and caption
Credit: NASA/JPL-Caltech

NASA and the Department of Energy have completed a more detailed risk analysis for the Mars 2020 rover launch from Florida.

As NASA continues preparations for the summer 2020 Florida launch of its Mars 2020 rover, including the recent completion of testing the spacecraft in Mars-like conditions, public safety remains a top priority.

Detailed analysis of the potential radiological risks associated with launching a spacecraft powered by a radioisotope thermoelectric generator is part of standard operating procedures for NASA missions like Mars Curiosity and Pluto New Horizons. These missions use this type of power system to explore where solar power alone is not enough to get the job done.

For Mars 2020 that analysis started years ago, resulting in NASA's 2015 decision to use a radioisotope power system to provide electrical power for the rover, given that the risks were small. NASA and the Department of Energy (DOE) have continued to evaluate the potential radiological impacts of the launch and have completed a more detailed risk analysis.

On Oct. 25, that analysis and other updated information were released for public comment in a draft Supplemental Environmental Impact Statement (SEIS). The draft SEIS is available now for public review and comment. Public meetings on the draft were held in the Cape Canaveral area and online during the week of Nov. 11.

The new analysis finds that the most probable outcome for Mars 2020 is a successful launch. An accident during launch is unlikely, and the estimated chance of an accident with a release of radiological material from the rover's power system is small: 1 in 960 across all possible accident scenarios. In the case of a release, the resulting estimated maximum radiation dose for an exposed individual in the launch area who takes no protective actions would be low, equivalent to approximately eight months of natural background radiation for the average U.S. resident.

The launch period for the Mars 2020 mission opens on July 17, 2020. After the spacecraft lands on the Martian surface on Feb. 18, 2021, the rover will search for signs of past microbial life, characterize the planet's climate and geology, and collect samples for future return to Earth.

The system that provides electrical power for Mars 2020 and its scientific equipment is essentially a nuclear battery that uses the natural radioactive decay from plutonium dioxide as a heat source to produce power and warm internal systems. NASA has a long and successful record of performance with these power systems. The system on Mars 2020, known as the Multi-Mission Radioisotope Thermoelectric Generator (MMRTG), is the same as the one on the Curiosity rover, which launched from Cape Canaveral in 2011 and continues to operate on Mars. Similar power systems have flown on more than two dozen U.S. space missions since 1961.

Even though the chances of launch accidents are small, NASA prepares response plans for all of its launches to be ready to protect the public. To manage the response to an accident with a possible release of radioactive material in the launch area, NASA establishes an assessment and operations center staffed by a variety of subject matter experts that deploys monitoring devices and field teams equipped with specialized instruments prior to launch. NASA also assembles a multi-agency communications team that serves as a clearinghouse for timely and accessible information updates on accident conditions and any recommendations on precautionary measures.

The public comment period for the Mars 2020 draft SEIS is open through Dec. 10.