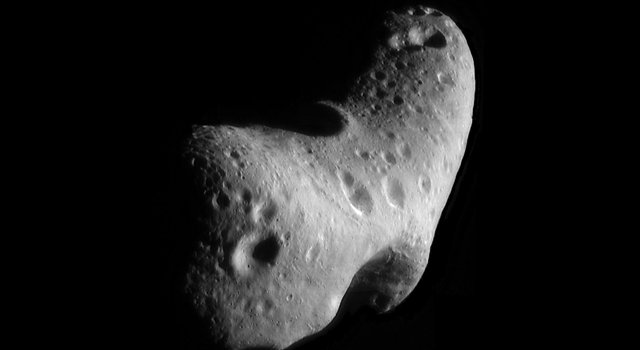 This image, taken by NASA's Near Earth Asteroid Rendezvous mission in 2000, shows a close-up view of Eros, an asteroid with an orbit that takes it somewhat close to Earth. NASA's Spitzer Space Telescope observed Eros and dozens of other near-Earth asteroids.
Credit: NASA/JHUAPL

On Thursday, June 19, NASA will host a televised update on recent progress and upcoming milestones in the agency's efforts to identify, capture and relocate an asteroid, and send astronauts to take samples of it in the 2020s.

On Thursday, June 19, NASA will host a televised update on recent progress and upcoming milestones in the agency's efforts to identify, capture and relocate an asteroid, and send astronauts to take samples of it in the 2020s. The 10 to 11:30 a.m. PDT (1 to 2:30 p.m. EDT) event will kick off a two-day virtual workshop to highlight successes and new opportunities through NASA's Asteroid Grand Challenge, which coincides with its first anniversary.

As leftover building blocks of the solar system, near-Earth asteroids may hold important clues about the origins of life and other scientific questions. Improving our understanding of asteroid composition and movement could help us protect Earth from impacts and identify good candidates for future missions as we expand human presence to Mars.

For these reasons and more, NASA is engaged in an Asteroid Redirect Mission, which plans to identify, capture and redirect an asteroid to a stable orbit around the moon, where astronauts will study it in the 2020s. New partnerships through the agency's grand challenge also are helping augment NASA's existing work to identify asteroid threats to Earth and figure out what to do about them.

During the event, speakers from multiple NASA centers and universities will discuss asteroid observation efforts and new findings, current and future testing for the Asteroid Redirect Mission, and ways for the public to participate in the grand challenge.

Participants in the update are:

For more information on how to watch the event on NASA TV or online, visit:

Questions can be submitted during the event on Twitter using the hashtag #AskNASA.

For more information on the Asteroid Initiative and grand challenge virtual workshop, visit: