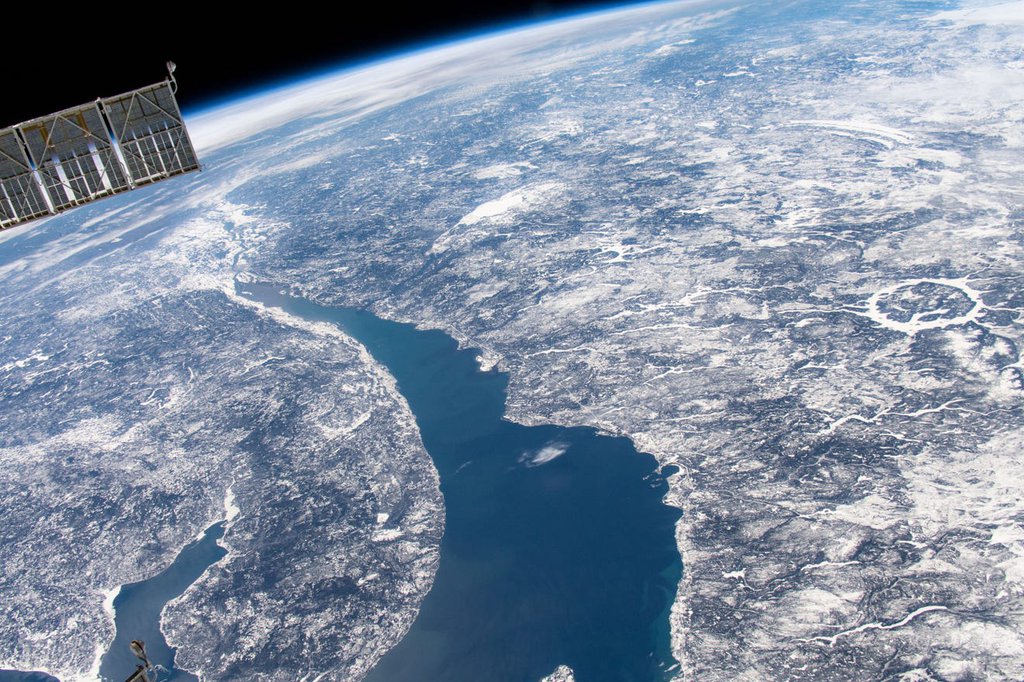 This image was captured by the International Space Station Expedition 59 crew as they orbited 400 kilometers above Quebec, Canada. Right of center, the ring-shaped lake is a modern reservoir within the eroded remnant of an ancient 100 kilometer diameter impact crater, which is over 200 million years old.

JPL’s Center for Near Earth Object Studies will lead the hypothetical impact scenario to see how international agencies respond to an actual impact prediction.

EXERCISE ONLY – the information listed under this update summarizes details from a simulated asteroid impact exercise during the 7th International Academy of Aeronautics (IAA) Planetary Defense Conference. The fictitious asteroid, named 2021PDC, is being used solely for the purpose of this exercise. It does not exist and therefore there is no threat to Earth.

The 7th IAA Planetary Defense conference kicked off on Monday, April 26, along with the simulated “tabletop” asteroid impact exercise, led by NASA JPL’s Center for Near-Earth Object Studies (CNEOS). Exercises such as these are extremely important as they bring key members in government, the international planetary defense community, and other areas of expertise such as emergency response together to work through how a global response to a future asteroid impact threat might occur. During the exercise, participants received daily updates, simulating the continued observation and collection of data over time, revealing more information about the asteroid’s size and expected impact region on Earth. A quick summary of daily exercise updates is below, and further information – including daily fact sheets and briefing materials – may be found on the CNEOS asteroid impact exercise page: https://cneos.jpl.nasa.gov/pd/cs/pdc21/

Day 1 Summary (April 26): The exercise begins with the “discovery” of a fictious asteroid on April 19, 2021, by the Pan-STARRS near-Earth object survey project, operated by the University of Hawaii for NASA’s Planetary Defense Program. Confirmed and named “2021PDC,” an obvious fictitious name by the Minor Planet Center, the simulated asteroid is estimated to be 35 million miles (57 million kilometers) from Earth at that time, and orbit calculations have determined it to have a 5% (1 in 20 chance) of impacting Earth on or around Oct. 20, 2021, six months from its discovery date.

Day 2 Summary (April 27): Day two of the exercise hypothetically fast forwards to May 2, 2021, where astronomers have spent the previous week working to refine 2021PDC’s orbit and impact probability. Newly processed archival image data collected by the Pan-STARRS asteroid survey back in 2014 reveal 2021PDC could be seen in images seven years prior to discovery, during its previous close approach to Earth, and astronomers have used this data in tandem with recent observations to reduce orbit uncertainties and conclude the simulated asteroid now has a 100% certainty of hitting Earth in Europe or northern Africa. Over the next several months, the region of the fictitious asteroid’s impact is expected to shrink significantly in size as new observation data continue to refine the asteroid’s orbit. However, the size of 2021PDC – and subsequently, any effects that would result from its impact – remain highly uncertain and will not be well known until the asteroid is closer to Earth and able to be analyzed using radar. Hypothetical options for how to prevent 2021PDC impacting Earth are discussed. Space mission designers tried to envision what might be done to attempt to disrupt the asteroid before it impacts, but concluded the short amount of time before impact (less than 6 months) did not allow a credible space mission to be undertaken, given the current state of technology.

Day 3 of Exercise (April 28): Day three begins on June 30, 2021 – International Asteroid Day – which is less than four months prior to fictitious asteroid 2021PDC’s simulated impact. Using the world’s largest telescopes, astronomers around the globe have continued to track 2021PDC every night to continually refine the asteroid’s orbit and significantly narrow its expected impact region to fall within Germany, the Czech Republic, Austria, Slovenia, and Croatia. The specific size of asteroid 2021PDC is still uncertain, but new space-based infrared measurements simulated by NASA’s NEOWISE satellite have helped constrain the largest possible size for 2021PDC as 1600ft (500 m), and the smallest possible size as 100 feet (35 meters). As more information is ascertained by incoming data, risk and damage assessment analyses increase in frequency to help inform emergency response and evacuation planning for regions affected by the simulated asteroid’s region of impact effects.

Day 4 of Exercise (April 29): The final day of the hypothetical asteroid impact exercise occurs on Oct.14, 2021, just six days before 2021PDC’s simulated impact. 2021PDC is an estimated 3.9 million miles (6.3 million km) from Earth, which is close enough for Goldstone Solar System Radar to detect and analyze 2021PDC and significantly refine the asteroid’s size and physical characteristics. This determined the asteroid is much smaller than previously thought, thus reducing the expected region of damage from the impact. At this point, astronomers have been able to narrow the impact region to be centered near the border of Germany, the Czech Republic, and Austria, and have determined the asteroid has a 99% probability of impacting within this region. Further disaster response discussions occur to help ensure affected regions are safely evacuated ahead of the simulated impact.

During the week of April 26, members of NASA’s Planetary Defense Coordination Office (PDCO) will participate in a “tabletop exercise” to simulate an asteroid impact scenario. The exercise depicting this fictional event is being led by NASA’s Jet Propulsion Laboratory’s Center for Near Earth Object Studies (CNEOS), allowing NASA’s PDCO and other U.S. agencies and space science institutions, along with international space agencies and partners, to use the fictitious scenario to investigate how near-Earth object (NEO) observers, space agency officials, emergency managers, decision makers, and citizens might respond and work together to an actual impact prediction and simulate the evolving information that becomes available in the event an asteroid impact threat is discovered.

The fictitious impact scenario will occur during the 7th IAA Planetary Defense Conference, hosted by the United Nations Office for Outer Space Affairs in cooperation with ESA (European Space Agency), and will evolve over the five days of the conference, starting Monday, April 26. At several points in the conference program, leaders of the exercise will brief participants on the latest status of the fictitious scenario and solicit feedback for next steps based on the simulated data that is “discovered” each day. These type of exercises are specifically identified as part of the National Near-Earth Object Preparedness Strategy and Action Plan developed over a three-year period and published by the White House in June 2018.

The Multi-angle Imaging SpectroRadiometer (MISR) instrument on NASA's Terra satellite captured a large fireball — or extremely bright and visible meteor (or meteoroid) — over the Bering Sea on Dec. 18, 2018. The fireball's explosion unleashed 49 kilotons of energy. The image shows the path the meteoroid traveled and its point of explosion (lower right). Full Image Details

“Each time we participate in an exercise of this nature, we learn more about who the key players are in a disaster event, and who needs to know what information, and when,” said Lindley Johnson, NASA’s Planetary Defense Officer. “These exercises ultimately help the planetary defense community communicate with each other and with our governments to ensure we are all coordinated should a potential impact threat be identified in the future.”

So far, NASA has participated in seven impact scenarios – four at previous Planetary Defense Conferences (2013, 2015, 2017, and 2019) and three in conjunction with the Federal Emergency Management Agency (FEMA). The joint NASA-FEMA exercises included representatives of several other federal agencies, including the Departments of Defense and State.

“Hypothetical asteroid impact exercises provide opportunities for us to think about how we would respond in the event that a sizeable asteroid is found to have a significant chance of impacting our planet,” said Dr. Paul Chodas, director of CNEOS. “Details of the scenario – such as the probability of the asteroid impact, where and when the impact might occur – are released to participants in a series of steps over the days of the conference to simulate how a real situation might evolve.”

The fictional scenario kicks off on April 26, when astronomers “discover” a potentially hazardous NEO considered a risk to Earth. Details about the imaginary asteroid’s threat to our planet will evolve over the days of the conference, and exercise participants will discuss potential preparations for asteroid reconnaissance and deflection missions and planning for mitigation of a potential impact’s effects. But it is a real parameter that the international community has decided that a 1 in 100 chance of impact is the threshold to begin response actions.

The Planetary Defense Conference and its exercise serve as precursors to the launch of NASA’s Double Asteroid Redirection Test (DART), which is the first-ever actual demonstration of an asteroid deflection technology, and the first test mission of the agency’s Planetary Defense program. DART is scheduled to launch later this year and will impact the asteroid Dimorphos in Fall 2022 to change its orbit in space, which could be a key technique for mitigating a potentially hazardous asteroid that is on a collision path with Earth, should one be discovered in the future. Through an international observation campaign, follow-up observations of Dimorphos using ground-based telescopes will monitor the orbit of Dimorphos and measure the change in time it takes the asteroid to orbit its larger companion, Didymos, due to DART’s impact.

“DART will be the first test for planetary defense, and the data returned after it impacts Dimorphos will help scientists better understand one way we might mitigate a potentially hazardous NEO discovered in the future,” said Andrea Riley, program executive for DART at NASA Headquarters. “While the asteroid DART impacts poses no threat to Earth, it is in a perfect location for us to perform this test of the technology before it may actually be needed.”

Starting April 26, this page will be updated during the week with quick snapshots that capture the results from each step of the exercise. More information on the exercise, including a “fact sheet” of updated findings, will be available on the exercise page on the 2021 PDC Hypothetical Asteroid Impact Scenario page.