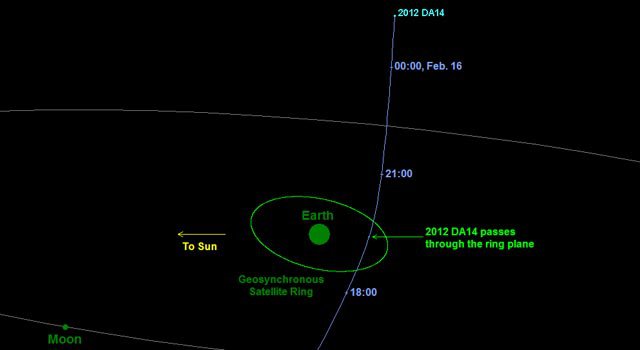 Diagram depicting the passage of asteroid 2012 DA14 through the Earth-moon system on Feb. 15, 2013.
Credit: NASA/JPL-Caltech

PASADENA, Calif. -- NASA Television will provide commentary starting at 11 a.m. PST (2 p.m. EST) on Friday, Feb. 15, during the close, but safe, flyby of a small near-Earth asteroid named 2012 DA14. NASA places a high priority on tracking asteroids and protecting our home planet from them. This flyby will provide a unique opportunity for researchers to study a near-Earth object up close.

The half-hour broadcast from NASA's Jet Propulsion Laboratory in Pasadena, Calif., will incorporate real-time animation to show the location of the asteroid in relation to Earth, along with live or near real-time views of the asteroid from observatories in Australia, weather permitting.

The commentary will be available via NASA TV and streamed live online at:

In addition to the commentary, near real-time imagery of the asteroid's flyby before and after closest approach, made available to NASA by astronomers in Australia and Europe, weather permitting, will be streamed beginning at about 9 a.m. PST (noon EST) and continuing through the afternoon at the following website:

A Ustream feed of the flyby from a telescope at NASA's Marshall Space Flight Center in Huntsville, Ala., will be streamed for three hours starting at 6 p.m. PST (8 p.m. CST / 9 p.m. EST). To view the feed and ask researchers questions about the flyby via Twitter, visit:

The NASA Near Earth Objects (NEO) Program at the agency's headquarters in Washington manages and funds the search, study and monitoring of NEOs, or asteroids and comets, whose orbits periodically bring them close to the Earth. NASA's study of NEOs provides important clues to understanding the origin of our solar system. The objects also are a repository of natural resources and could become waystations for future exploration. In collaboration with other external organizations, one of the program's key goals is to search and hopefully mitigate potential NEO impacts on Earth. JPL conducts the NEO program's technical and scientific activities.

For more information, including graphics and animations showing the flyby of 2012 DA14, visit: