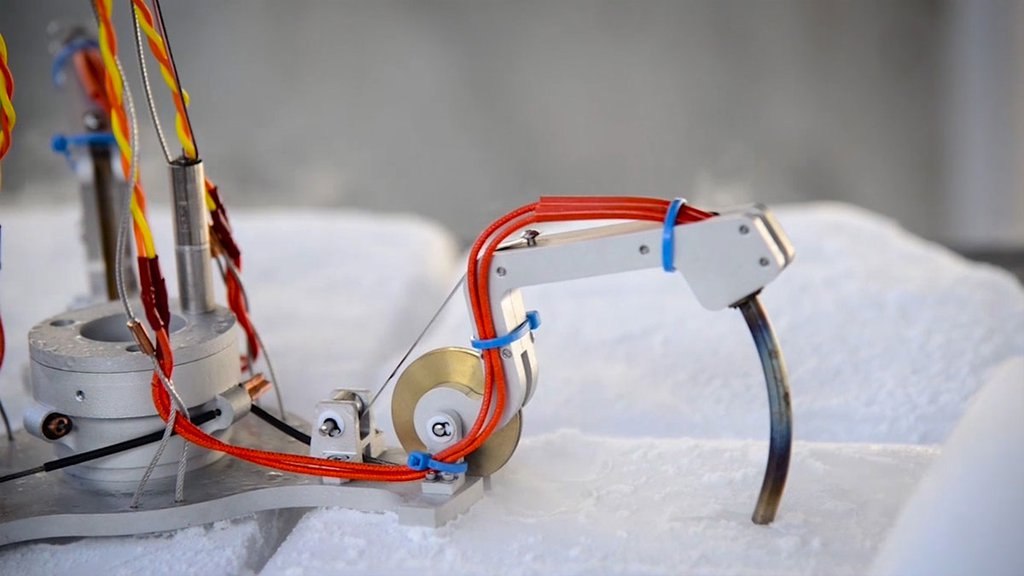 A robotic claw, one of several innovative tools developed at JPL for exploring icy, ocean worlds like Europa.
Credit: NASA/JPL-Caltech

Want to go ice fishing on Jupiter's moon Europa? There's no promising you'll catch anything, but a new set of robotic prototypes could help.

Since 2015, NASA's Jet Propulsion Laboratory in Pasadena, California, has been developing new technologies for use on future missions to ocean worlds. That includes a subsurface probe that could burrow through miles of ice, taking samples along the way; robotic arms that unfold to reach faraway objects; and a projectile launcher for even more distant samples.

All these technologies were developed as part of the Ocean Worlds Mobility and Sensing study, a research project funded by NASA's Space Technology Mission Directorate in Washington. Each prototype focuses on obtaining samples from the surface -- or below the surface -- of an icy moon.

"In the future, we want to answer the question of whether there's life on the moons of the outer planets -- on Europa, Enceladus and Titan," said Tom Cwik, who leads JPL's Space Technology Program. "We're working with NASA Headquarters to identify the specific systems we need to build now, so that in 10 or 15 years, they could be ready for a spacecraft."

Those systems would face a variety of challenging environments. Temperatures can reach hundreds of degrees below freezing. Rover wheels might cross ice that behaves like sand. On Europa, surfaces are bathed in radiation.

"Robotic systems would face cryogenic temperatures and rugged terrain and have to meet strict planetary protection requirements," said Hari Nayar, who leads the robotics group that oversaw the research. "One of the most exciting places we can go is deep into subsurface oceans -- but doing so requires new technologies that don't exist yet."

A hole in the ice

Brian Wilcox, an engineering fellow at JPL, designed a prototype inspired by so-called "melt probes" used here on Earth. Since the late 1960s, these probes have been used to melt through snow and ice to explore subsurface regions.

The problem is that they use heat inefficiently. Europa's crust could be 6.2 miles deep or it could be 12.4 miles deep (10 to 20 kilometers); a probe that doesn't manage its energy would cool down until it stopped frozen in the ice.

Wilcox innovated a different idea: a capsule insulated by a vacuum, the same way a thermos bottle is insulated. Instead of radiating heat outwards, it would retain energy from a chunk of heat-source plutonium as the probe sinks into the ice.

A rotating sawblade on the bottom of the probe would slowly turn and cut through the ice. As it does so, it would throw ice chips back into the probe's body, where they would be melted by the plutonium and pumped out behind it.

Removing the ice chips would ensure the probe drills steadily through the ice without blockages. The ice water could also be sampled and sent through a spool of aluminum tubing to a lander on the surface. Once there, the water samples could be checked for biosignatures.

"We think there are glacier-like ice flows deep within Europa's frozen crust," Wilcox said. "Those flows churn up material from the ocean down below. As this probe tunnels into the crust, it could be sampling waters that may contain biosignatures, if any exist."

To ensure no Earth microbes hitched a ride, the probe would heat itself to over 900 degrees Fahrenheit (482 degrees Celsius) during its cruise on a spacecraft. That would kill any residual organisms and decompose complex organic molecules that could affect science results.

Researchers also looked at the use of robotic arms, which are essential for reaching samples from landers or rovers. On Mars, NASA's landers have never extended beyond 6.5 to 8 feet (2 to 2.5 meters) from their base. For a longer reach, you need to build a longer arm.

A folding boom arm was one idea that bubbled up at JPL. Unfolded, the arm can extend almost 33 feet (10 meters). Scientists don't know which samples will be enticing once a lander touches down, so a longer reach could give them more options.

For targets that are even farther away, a projectile launcher was developed that can fire a sampling mechanism up 164 feet (50 meters).

Both the arm and the launcher could be used in conjunction with an ice-gripping claw. This claw could someday have a coring drill attached to it; if scientists want pristine samples, they'll need to bore through up to eight inches (about 20 centimeters) of Europa's surface ice, which is thought to shield complex molecules from Jupiter's radiation.

After deployment from a boom arm or a projectile launcher, the claw could anchor itself using heated prongs that melt into the ice and secure its grip. That ensures that a drill's bit is able to penetrate and collect a sample.

In July, NASA will mark a 20-year legacy of rovers driving across Martian desert, harkening back to the July 4, 1997 landing of Mars Pathfinder, with its Sojourner rover.

But building a rover for an icy moon would require a rethink.

Places like Saturn's moon Enceladus have fissures that blow out jets of gas and icy material from below the surface. They'd be prime science targets, but the material around them is likely to be different than ice on Earth.

Instead, tests have found that granular ice in cryogenic and vacuum conditions behaves more like sand dunes, with loose grains that wheels can sink into. JPL researchers turned to designs first proposed for crawling across the moon's surface. They tested lightweight commercial wheels fixed to a rocker bogey suspension system that has been used on a number of JPL-led missions.

Each of these prototypes and the experiments conducted with them were just starting points. With the ocean worlds study complete, researchers will now consider whether these inventions can be further refined. A second phase of development is being considered by NASA. Those efforts could eventually produce the technologies that might fly on future missions to the outer solar system.