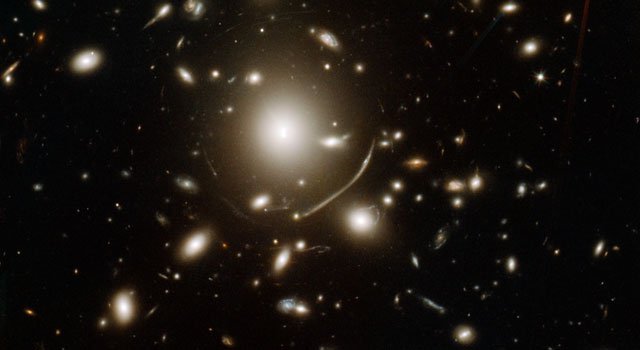 The giant cluster of elliptical galaxies in the center of this image contains so much dark matter mass that its gravity bends light.› Full image and caption
Credit: NASA, ESA, CRAL, LAM, STScI

Astronomers have uncovered one of the youngest galaxies in the distant universe, with stars that formed a mere 200 million years after the Big Bang.

PASADENA, Calif. -- Astronomers have uncovered one of the youngest galaxies in the distant universe, with stars that formed 13.5 billion years ago, a mere 200 million years after the Big Bang. The finding addresses questions about when the first galaxies arose, and how the early universe evolved.

NASA's Hubble Space Telescope was the first to spot the newfound galaxy. Detailed observations from the W.M. Keck Observatory on Mauna Kea in Hawaii revealed the observed light dates to when the universe was only 950 million years old; the universe formed about 13.7 billion years ago.

Infrared data from both Hubble and the post-coolant, or "warm," phase of NASA's Spitzer Space Telescope mission revealed the galaxy's stars are quite mature, which means they must have formed when the universe was just a toddler.

"This challenges theories of how soon galaxies formed in the first years of the universe," said Johan Richard of the Centre de Recherche Astronomique de Lyon, Université Lyon 1 in France, lead author of a new study accepted for publication in the Monthly Notices of the Royal Astronomical Society. "It could even help solve the mystery of how the hydrogen fog that filled the early universe was cleared."

This galaxy is not the most distant ever observed, but it is one of the youngest to be observed with such clarity. Normally, galaxies like this one are extremely faint and difficult to study, but, in this case, nature has provided the astronomers with a cosmic magnifying glass. The galaxy's image is being magnified by the gravity of a massive cluster of galaxies parked in front of it, making it appear 11 times brighter. This phenomenon is called gravitational lensing.

"Without this big lens in space, we could not study galaxies this faint with currently available observing facilities," said co-author Eiichi Egami of the University of Arizona in Tucson. "Thanks to nature, we have this great opportunity to see our universe as it was eons ago."

The findings may help explain how the early universe became "reionized." At some point in our universe's early history, it transitioned from the so-called dark ages to a period of light, as the first stars and galaxies began to ignite. This starlight ionized neutral hydrogen atoms floating around in space, giving them a charge. Ultraviolet light could then travel unimpeded through what had been an obscuring fog.

The discovery of a galaxy possessing stars that formed only 200 million years after the big bang helps astronomers probe this cosmic reionization epoch. When this galaxy was developing, its hot, young stars would have ionized vast amounts of the neutral hydrogen gas in intergalactic space. A population of similar galaxies probably also contributed to this reionization, but they are too faint to see without the magnifying effects of gravitational lensing.

NASA's James Webb Space Telescope (JWST), scheduled to launch later this decade, will be able to see these faint galaxies lacking magnification. A successor to Hubble and Spitzer, JWST will see infrared light from the missing population of early galaxies. As a result, the mission will reveal some of our universe's best-kept secrets.

"Seeing a galaxy as it appeared near the beginning of the universe is an awe-inspiring feat enabled by innovative technology and the fortuitous effect of gravitational lensing," said Jon Morse, NASA's Astrophysics Division director at the agency's headquarters in Washington. "Observations like this open a window across space and time, but more importantly, they inspire future work to one day peer at the stars that lit up the universe following the big bang."