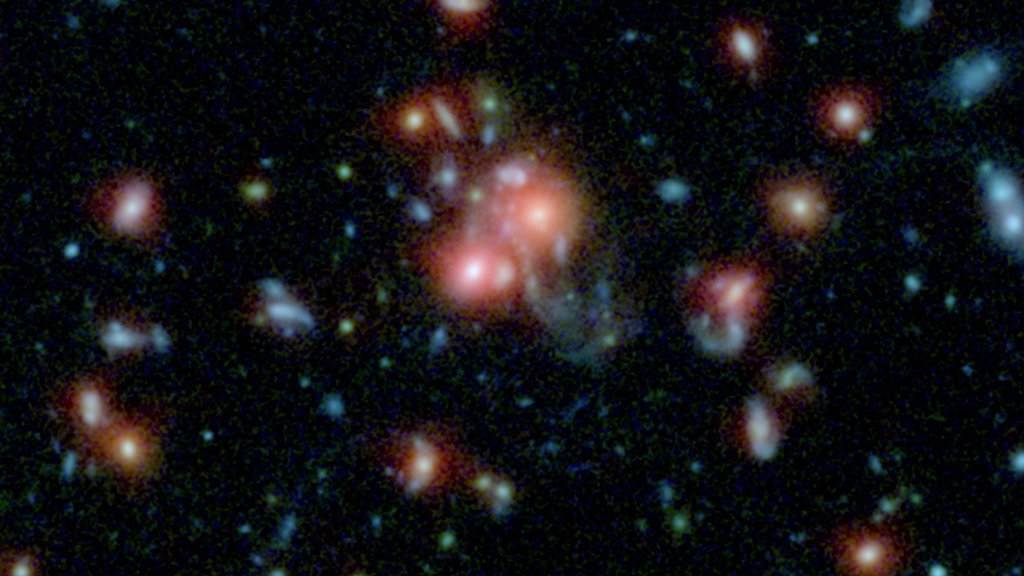 Astronomers have discovered a rare beast of a galaxy cluster whose heart is bursting with new stars.

Astronomers have discovered a rare beast of a galaxy cluster whose heart is bursting with new stars. The unexpected find, made with the help of NASA's Spitzer and Hubble space telescopes, suggests that behemoth galaxies at the cores of these massive clusters can grow significantly by feeding off gas stolen from another galaxy.

"Usually, the stars at the centers of galaxy clusters are old and dead, essentially fossils," said Tracy Webb of McGill University, Montreal, Canada, lead author of a new paper on the findings accepted for publication in the Astrophysical Journal. "But we think the giant galaxy at the center of this cluster is furiously making new stars after merging with a smaller galaxy."

Galaxy clusters are vast families of galaxies bound and grouped by the ties of gravity. Our own Milky Way resides in a small galaxy group, called the Local Group, which itself is on the periphery of the vast Laniakea supercluster of 100,000 galaxies. (Laniakea is Hawaiian for "immeasurable heaven.")

The cluster in the new study, referred to by astronomers as SpARCS1049+56, has at least 27 galaxy members, and a combined mass equal to nearly 400 trillion suns. It is located 9.8 billion light-years away in the Ursa Major constellation. The object was initially discovered using Spitzer and the Canada-France-Hawaii telescope, located on Mauna Kea in Hawaii, and confirmed using the W.M. Keck Observatory, also on Mauna Kea.

What makes this cluster unique is its luminous heart of new stars. At the core of most massive galaxy clusters lies one hulking galaxy that usually doesn't produce new stars very quickly. The galaxy dominating the cluster SpARCS1049+56 is rapidly spitting out an enormous number of stars -- about 860 new ones a year. For reference, our Milky Way makes only about one to two stars per year.

"With Spitzer's infrared camera, we can actually see the ferocious heat from all these hot young stars," said co-author Jason Surace from NASA's Spitzer Science Center at the California Institute of Technology in Pasadena. Spitzer detects infrared light, so it can see the warm glow of hidden, dusty regions where stars form.

Follow-up studies with Hubble in visible light helped confirm the source of the fuel, or gas, for the new stars. A smaller galaxy seems to have recently merged with the monster galaxy in the middle of the cluster, lending its gas to the larger galaxy and igniting a fury of new stars.

"Hubble found a train wreck of a merger at the center of this galaxy," said Webb.

Hubble specifically detected features in the smaller, merging galaxy called "beads on a string," which are pockets of gas that condense where new stars are forming. Beads on a string are telltale signs of collisions between gas-rich galaxies, a phenomenon known to astronomers as wet mergers, where "wet" refers to the presence of gas. In these smash-ups, the gas is quickly converted to new stars.

Dry mergers, by contrast, occur when galaxies with little gas collide and no new stars are formed. Typically, galaxies at the centers of clusters grow in mass through dry mergers at their core, or by siphoning gas into their centers.

The new discovery is one of the first known cases of a wet merger at the core of a distant galaxy cluster. Hubble previously discovered another closer galaxy cluster containing a wet merger, but it wasn't forming stars as vigorously.

The researchers are planning more studies to find out how common galaxy clusters like SpARCS1049+56 are. The cluster may be an outlier, or it may represent an early time in our universe when gobbling up gas-rich galaxies was the norm.