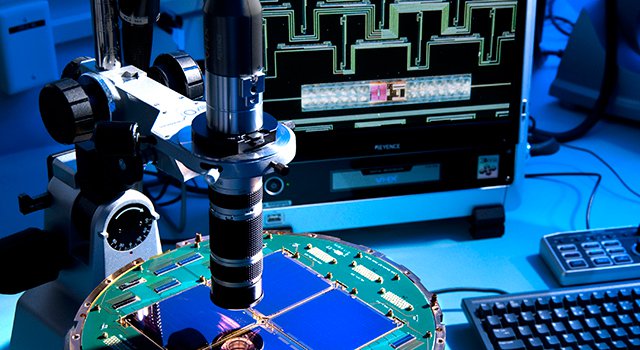 The BICEP2 telescope at the South Pole used a specialized array of superconducting detectors to capture polarized light from billions of years ago.› Full image and caption
Credit: NASA/JPL-Caltech 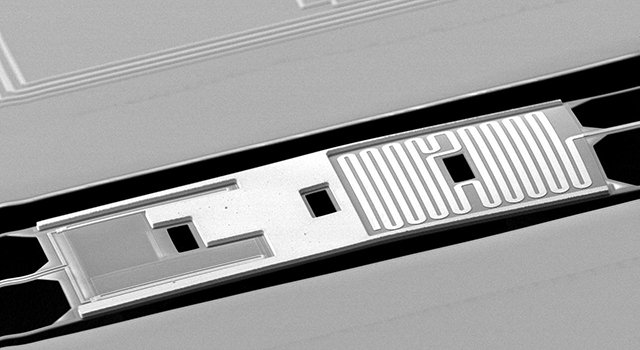 This image shows one of the NASA detectors from the BICEP2 project, developed in collaboration with the National Science Foundation.› Full image and caption
Credit: NASA/JPL-Caltech 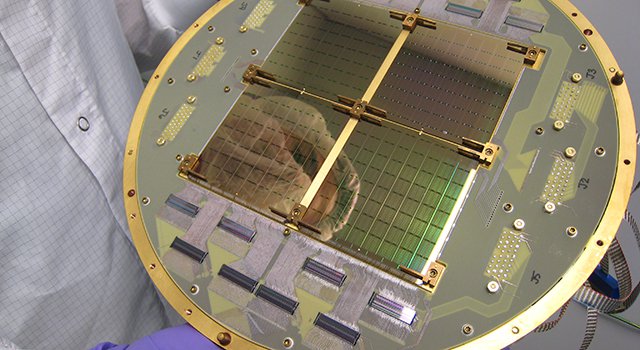 This image shows an array of the 512 superconducting detectors used on the BICEP2 telescope at the South Pole.› Full image and caption
Credit: NASA/JPL-Caltech

Astronomers are announcing today that they have acquired the first direct evidence that gravitational waves rippled through our infant universe during an explosive period of growth called inflation. This is the strongest confirmation yet of cosmic inflation theories, which say the universe expanded by 100 trillion trillion times, in less than the blink of an eye.

The findings were made with the help of NASA-developed detector technology on the BICEP2 telescope at the South Pole, in collaboration with the National Science Foundation.

"Operating the latest detectors in ground-based and balloon-borne experiments allows us to mature these technologies for space missions and, in the process, make discoveries about the universe," said Paul Hertz, NASA's Astrophysics Division director in Washington.

Our universe burst into existence in an event known as the Big Bang 13.8 billion years ago. Moments later, space itself ripped apart, expanding exponentially in an episode known as inflation. Telltale signs of this early chapter in our universe's history are imprinted in the skies, in a relic glow called the cosmic microwave background. Recently, this basic theory of the universe was again confirmed by the Planck satellite, a European Space Agency mission for which NASA provided detector and cooler technology.

But researchers had long sought more direct evidence for inflation in the form of gravitational waves, which squeeze and stretch space.

"Small, quantum fluctuations were amplified to enormous sizes by the inflationary expansion of the universe. We know this produces another type of waves called density waves, but we wanted to test if gravitational waves are also produced," said project co-leader Jamie Bock of NASA's Jet Propulsion Laboratory, Pasadena, Calif., which developed the BICEP2 detector technology. Bock has a joint appointment with the California Institute of Technology, also in Pasadena.

The gravitational waves produced a characteristic swirly pattern in polarized light, called "B-mode" polarization. Light can become polarized by scattering off surfaces, such as a car or pond. Polarized sunglasses reject polarized light to reduce glare. In the case of the cosmic microwave background, light scattered off particles called electrons to become slightly polarized.

The BICEP2 team took on the challenge to detect B-mode polarization by pulling together top experts in the field, developing revolutionary technology and traveling to the best observing site on Earth at the South Pole. The collaboration includes major contributions from Caltech; JPL; Stanford University, Stanford, Calif.; Harvard University, Cambridge, Mass.; and the University of Minnesota, Minneapolis.

As a result of experiments conducted since 2006, the team has been able to produce compelling evidence for the B-mode signal, and with it, the strongest support yet for cosmic inflation. The key to their success was the use of novel superconducting detectors. Superconductors are materials that, when chilled, allow electrical current to flow freely, with zero resistance.

"Our technology combines the properties of superconductivity with tiny structures that can only be seen with a microscope. These devices are manufactured using the same micro-machining process as the sensors in cellphones and Wii controllers," said Anthony Turner, who makes these devices using specialized fabrication equipment at JPL's Microdevices Laboratory.

The B-mode signal is extremely faint. In order to gain the necessary sensitivity to detect the polarization signal, Bock and Turner developed a unique array of multiple detectors, akin to the pixels in modern digital cameras but with the added ability to detect polarization. The whole detector system operates at a frosty 0.25 Kelvin, just 0.45 degrees Fahrenheit above the lowest temperature achievable, absolute zero.

"This extremely challenging measurement required an entirely new architecture," said Bock. "Our approach is like taking a camera and building it on a printed circuit board."

The BICEP2 experiment used 512 detectors, which sped up observations of the cosmic microwave background by 10 times over the team's previous measurements. Their new experiment, already making observations, uses 2,560 detectors.

These and future experiments not only help confirm that the universe inflated dramatically, but are providing theorists with the first clues about the exotic forces that drove space and time apart.

The results of this study have been submitted to the journal Nature.