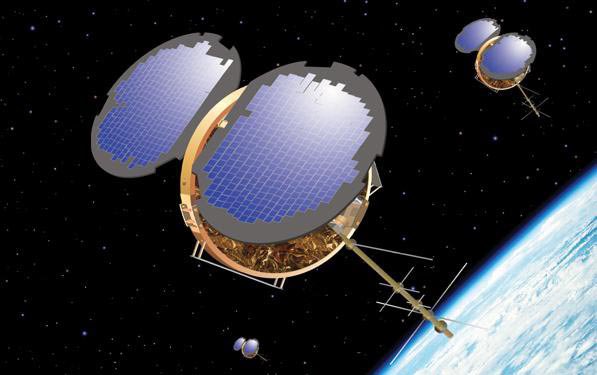 A globe-spanning constellation of six weather and climate research satellites based on a novel application of NASA-developed technology is set to launch from Vandenberg Air Force Base, Calif., Friday, April 14.

A globe-spanning constellation of six weather and climate research satellites based on a novel application of NASA-developed technology is set to launch from Vandenberg Air Force Base, Calif., Friday, April 14, at 5:10 p.m. PDT aboard a Minotaur rocket.

The Constellation Observing System for Meteorology, Ionosphere and Climate network, known as Cosmic in the United States and Formosat-3 in Taiwan, is expected to improve weather forecasts, monitor climate change and enhance space weather research.

The five-year mission is a cooperative program between the American Institute in Taiwan and the Taipei Economic and Cultural Representative Office in the United States. It is funded by that office's designated representative, Taiwan's National Space Organization, and various American Institute in Taiwan-designated representatives, including the National Science Foundation, Arlington, Va., which leads science activities. The University Corporation for Atmospheric Research, Boulder, Colo., manages the mission and designed the satellite array system.

The low-orbiting satellites will be the first to provide atmospheric data daily in real time over thousands of points on Earth. They will measure the bending of radio signals from the U.S. global positioning system as the signals pass through Earth's atmosphere, a technology known as radio occultation.

"Cosmic is a prime example of transitioning NASA remote sensing technology into operational weather forecasting," said Tony Mannucci, supervisor of JPL's Ionospheric and Atmospheric Remote Sensing Group. "The expected improvements in forecasting skill and Cosmic's contribution to long-term climate monitoring are a direct result of NASA's research investments in radio occultation, a technology originally developed by JPL in the 1960s for planetary atmospheric studies and later refined in the 1990s for Earth orbit use."

Temperature and water vapor profiles derived from the satellites will help meteorologists observe, research and forecast hurricanes, typhoons and other storm patterns over the oceans and improve many areas of weather prediction. The mission's stability, consistency and accuracy should be a boon to scientists quantifying long-term climate change trends.

The satellites are also expected to improve analysis and forecasting of space weather -- the geomagnetic storms that can interrupt sensitive satellite and communications systems and affect power grids.

While several single-satellite systems have used global positioning system signals experimentally over the past decade, Cosmic's satellite array is the first to provide the high-density global coverage required for both research and operational forecasting.

Orbiting 800 kilometers (500 miles) above Earth, the satellites will take about 2,500 measurements a day in a nearly uniform global distribution, providing independent data over vast ocean stretches where there are no weather balloons. Because its radio signals pierce thick cloud cover and precipitation, weather conditions will not interfere with data gathering. Mission data will be available to researchers and forecasters within a few hours of the observations.

Other major American Institute in Taiwan-designated representatives in Cosmic include the National Oceanic and Atmospheric Administration, U.S. Air Force Space Test Program and U.S. Air Force Space and Missile Systems Center Rocket Systems Launch Program, and the Office of Naval Research. The spacecraft was designed by Orbital Sciences Corporation. Broad Reach Engineering built the satellite constellation receivers. The Naval Research Laboratory designed and built the ionospheric sensors. The rest of the constellation was built and tested in Taiwan.

For more information on Cosmic on the Internet, visit: