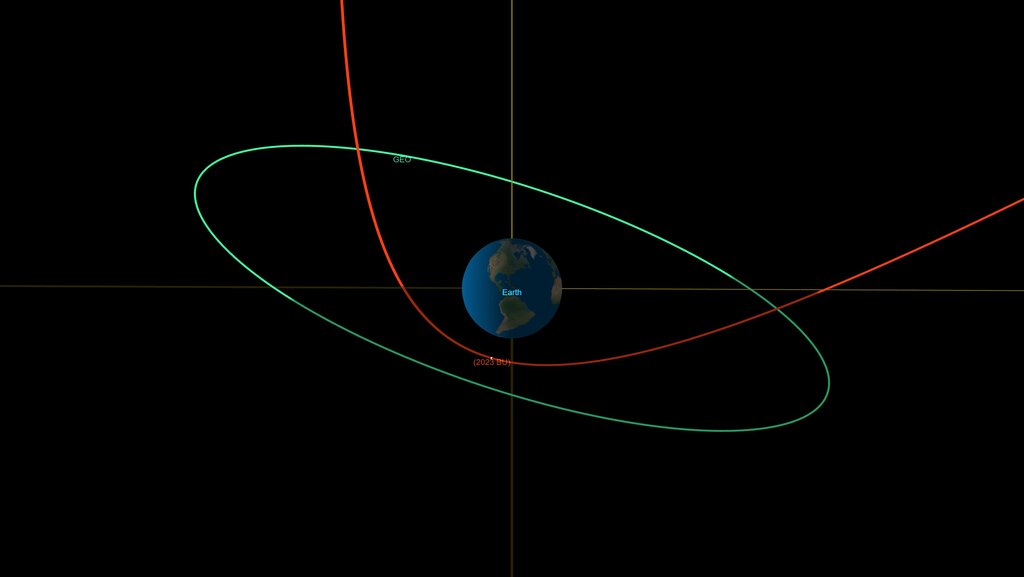 This orbital diagram from CNEOS’s close approach viewer shows 2023 BU’s trajectory – in red – during its close approach with Earth on Jan. 26, 2023. The asteroid will pass about 10 times closer to Earth than the orbit of geosynchronous satellites, shown in green line. 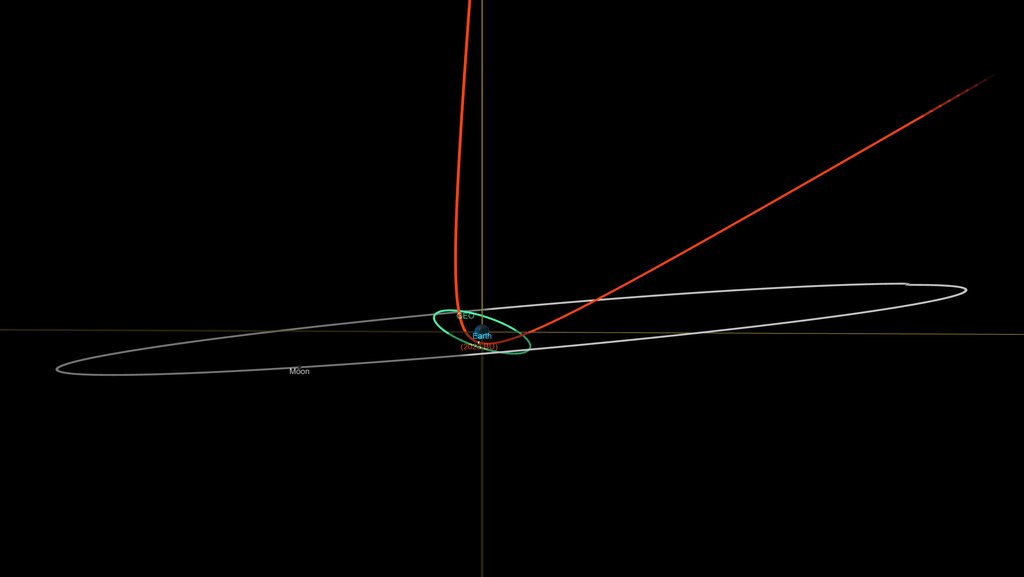 This view from NASA’s Scout system shows the deflection of asteroid 2023 BU’s trajectory – in red – caused by Earth’s gravity. The orbit of geosynchronous satellites is shown in green, and the orbit of the Moon is depicted by the gray oval.

Asteroid 2023 BU is about the size of a box truck and is predicted to make one of the closest approaches by a near-Earth object ever recorded.

On Thursday, Jan. 26, a small near-Earth asteroid will have a very close encounter with our planet. Designated 2023 BU, the asteroid will zoom over the southern tip of South America at about 4:27 p.m. PST (7:27 p.m. EST) only 2,200 miles (3,600 kilometers) above the planet’s surface and well within the orbit of geosynchronous satellites.

There is no risk of the asteroid impacting Earth. But even if it did, this small asteroid – estimated to be 11.5 to 28 feet (3.5 to 8.5 meters) across – would turn into a fireball and largely disintegrate harmlessly in the atmosphere, with some of the bigger debris potentially falling as small meteorites.

The asteroid was discovered by amateur astronomer Gennadiy Borisov, discoverer of the interstellar comet 2I/Borisov, from his MARGO observatory in Nauchnyi, Crimea, on Saturday, Jan. 21. Additional observations were reported to the Minor Planet Center (MPC) – the internationally recognized clearinghouse for the position measurements of small celestial bodies – and the data was then automatically posted to the Near-Earth Object Confirmation Page. After sufficient observations were collected, the MPC announced the discovery. Within three days, a number of observatories around the world had made dozens of observations, helping astronomers better refine 2023 BU’s orbit.

NASA’s Scout impact hazard assessment system, which is maintained by the Center for Near Earth Object Studies (CNEOS) at the agency’s Jet Propulsion Laboratory in Southern California, analyzed the data from the MPC’s confirmation page and quickly predicted the near miss. CNEOS calculates every known near-Earth asteroid orbit to provide assessments of potential impact hazards in support of NASA’s Planetary Defense Coordination Office (PDCO).

“Scout quickly ruled out 2023 BU as an impactor, but despite the very few observations, it was nonetheless able to predict that the asteroid would make an extraordinarily close approach with Earth,” said Davide Farnocchia, a navigation engineer at JPL who developed Scout. “In fact, this is one of the closest approaches by a known near-Earth object ever recorded.”

Fully interactive, Eyes on Asteroids uses science data to help visualize asteroid and comet orbits around the Sun. Zoom in to travel along with your favorite spacecraft as they explore these fascinating near-Earth objects in beautiful 3D.

While any asteroid in Earth’s proximity will experience a change in trajectory due to our planet’s gravity, 2023 BU will come so close that its path around the Sun is expected to be significantly altered. Before encountering Earth, the asteroid’s orbit around the Sun was roughly circular, approximating Earth’s orbit, taking 359 days to complete its orbit about the Sun. After its encounter, the asteroid’s orbit will be more elongated, moving it out to about halfway between Earth’s and Mars’ orbits at its farthest point from the Sun. The asteroid will then complete one orbit every 425 days.

More information about CNEOS, asteroids, and near-Earth objects can be found at: https://www.jpl.nasa.gov/asteroid-watch