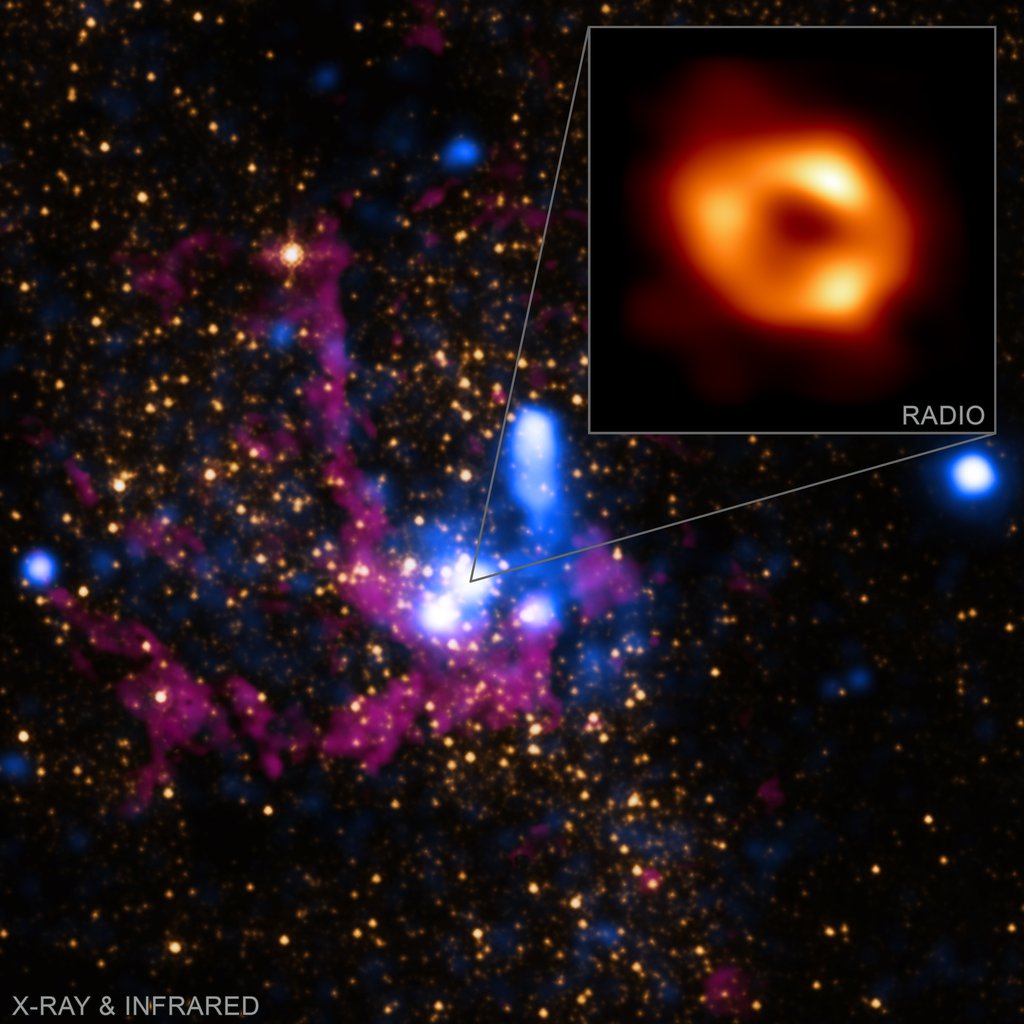 This composite image of the supermassive black hole at the center of the Milky Way galaxy includes data from multiple NASA telescopes. The inset image from the Event Horizon Telescope shows the region around the black hole’s event horizon, the boundary beyond which not even light can escape.

The black hole at the center of our galaxy is the subject of a groundbreaking new image from the Event Horizon Telescope collaboration.

As the Event Horizon Telescope collected data for its remarkable new image of the Milky Way’s supermassive black hole, a legion of other telescopes including three NASA X-ray observatories in space was also watching.

Astronomers are using these observations to learn more about how the black hole in the center of the Milky Way galaxy – known as Sagittarius A * (Sgr A* for short) – interacts with, and feeds off, its environment some 27,000 light years from Earth.

When the Event Horizon Telescope (EHT) observed Sgr A* in April 2017 to make the new image, scientists in the collaboration also peered at the same black hole with facilities that detect different wavelengths of light. In this multiwavelength observing campaign, they assembled X-ray data from NASA’s Chandra X-ray Observatory, Nuclear Spectroscopic Telescope Array (NuSTAR), and the Neil Gehrels Swift Observatory; radio data from the East Asian Very Long-Baseline Interferometer (VLBI) network and the Global 3-millimeter VLBI array; and infrared data from the European Southern Observatory’s Very Large Telescope in Chile.

“The Event Horizon Telescope has captured yet another remarkable image, this time of the giant black hole at the center of our own home galaxy,” said NASA Administrator Bill Nelson. “Looking more comprehensively at this black hole will help us learn more about its cosmic effects on its environment, and exemplifies the international collaboration that will carry us into the future and reveal discoveries we could never have imagined.”

One important goal was to catch X-ray flares, which are thought to be driven by magnetic processes similar to those seen on the Sun, but can be tens of millions of times more powerful. These flares occur approximately daily within the area of sky observed by the EHT, a region slightly larger than the event horizon of Sgr A*, the point of no return for matter falling inward. Another goal was to gain a critical glimpse of what is happening on larger scales. While the EHT result shows striking similarities between Sgr A* and the previous black hole it imaged, M87*, the wider picture is much more complex.

“If the new EHT image shows us the eye of a black hole hurricane, then these multiwavelength observations reveal winds and rain the equivalent of hundreds or even thousands of miles beyond,” said Daryl Haggard of McGill University in Montreal, Canada, who is one of the lead scientists of the multiwavelength campaign. “How does this cosmic storm interact with and even disrupt its galactic environment?”

One of the biggest ongoing questions surrounding black holes is exactly how they collect, ingest, or even expel material orbiting them at near light speed, in a process known as “accretion.” This process is fundamental to the formation and growth of planets, stars, and black holes of all sizes, throughout the universe.

Chandra images of hot gas around Sgr A* are crucial for accretion studies because they tell us how much material is captured from nearby stars by the black hole’s gravity, as well as how much manages to make its way close to the event horizon. This critical information is not available with current telescopes for any other black hole in the universe, including M87*.

“Astronomers can largely agree on the basics – that black holes have material swirling around them and some of it falls across the event horizon forever,” said Sera Markoff of the University of Amsterdam in the Netherlands, another coordinator of the multiwavelength observations. “With all of the data that we’ve gathered for Sgr A* we can go a lot further than this basic picture.”

Scientists in the large international collaboration compared the data from NASA’s high-energy missions and the other telescopes to state-of-the-art computational models that take into account factors such as Einstein’s general theory of relativity, effects of magnetic fields, and predictions of how much radiation the material around the black hole should generate at different wavelengths.

The comparison of the models with the measurements gives hints that the magnetic field around the black hole is strong and that the angle between the line of sight to the black hole and its spin-axis is low – less than about 30 degrees. If confirmed this means that from our vantage point we are looking down on Sgr A* and its ring more than we are from side-on, surprisingly similar to EHT’s first target, M87*.

“None of our models matches the data perfectly, but now we have more specific information to work from,” said Kazuhiro Hada from the National Astronomical Observatory of Japan. “The more data we have the more accurate our models, and ultimately our understanding of black hole accretion, will become.”

The researchers also managed to catch X-ray flares – or outbursts – from Sgr A* during the EHT observations: a faint one seen with Chandra and Swift, and a moderately bright one seen with Chandra and NuSTAR. X-ray flares with a similar brightness to the latter are regularly observed with Chandra, but this is the first time that the EHT simultaneously observed Sgr A*, offering an extraordinary opportunity to identify the responsible mechanism using actual images.

The millimeter-wave intensity and variability observed with EHT increases in the few hours immediately after the brighter X-ray flare, a phenomenon not seen in millimeter observations a few days earlier. Analysis and interpretation of the EHT data immediately following the flare will be reported in future publications.

The EHT team’s results are being published on May 12 in a special issue of The Astrophysical Journal Letters. The multiwavelength results are mainly described in papers II and V.

Goddard manages the Swift mission in collaboration with Penn State, the Los Alamos National Laboratory in New Mexico, and Northrop Grumman Space Systems in Dulles, Virginia. Other partners include the University of Leicester and Mullard Space Science Laboratory in the United Kingdom, Brera Observatory in Italy, and the Italian Space Agency.

For more information about the NuSTAR mission, visit: