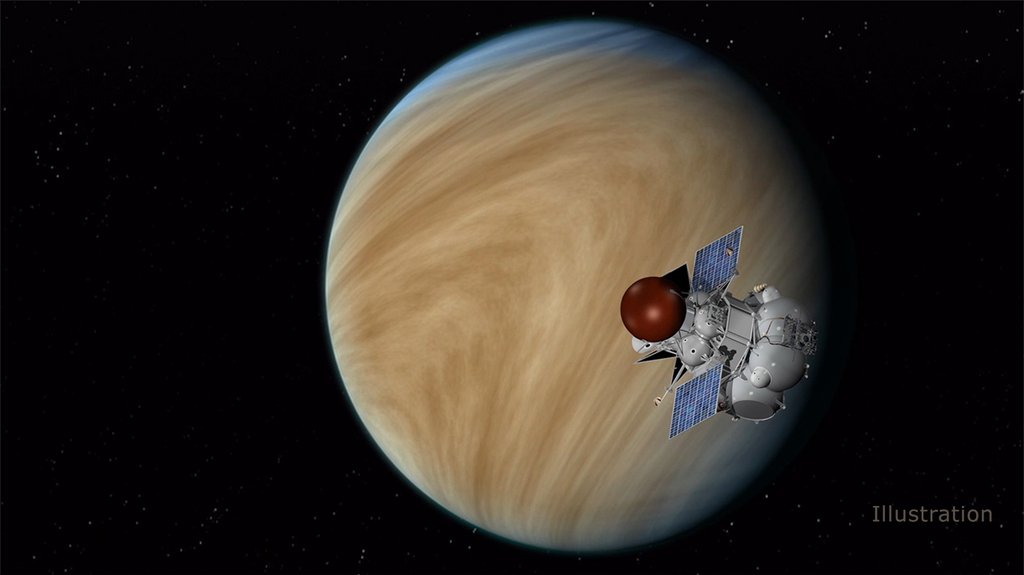 The Russian Academy of Sciences' Space Research Institute (IKI) Venera-D mission concept includes a Venus orbiter that would operate for up to three years, and a lander designed to survive the incredibly harsh conditions a spacecraft would encounter on Venus' surface for a few hours.
Credit: NASA/JPL-Caltech |

A team of NASA-sponsored scientists will meet with the Russian Academy of Sciences' Space Research Institute (IKI) next week to continue work on a Joint Science Definition Team study focused on identifying shared science objectives for Venus exploration. The visit comes after a report was recently delivered to both NASA Headquarters in Washington and IKI in Moscow, assessing and refining the science objectives of the IKI Venera-D (Venera-Dolgozhivuschaya) Mission to Venus, Earth's closest planetary neighbor.

"While Venus is known as our 'sister planet,' we have much to learn, including whether it may have once had oceans and harbored life," said Jim Green, director of the Planetary Science Division at NASA Headquarters in Washington. "By understanding the processes at work at Venus and Mars, we will have a more complete picture about how terrestrial planets evolve over time and obtain insight into the Earth's past, present and future."

Venus has intrigued scientists for decades. Similar to Earth in composition and size, it spins slowly in the opposite direction. The rocky world's thick atmosphere traps heat in a runaway greenhouse effect, making it the warmest planet in our solar system with surface temperatures hot enough to melt lead. Glimpses below the clouds reveal volcanoes and an intricate landscape. Venus is named for the Roman goddess of love and beauty, the counterpart to the Greek goddess Aphrodite.

"On a solar-system scale, Earth and Venus are very close together and of similar size and makeup," said David Senske, co-chair of the U.S. Venera-D science definition team, and a scientist at NASA's Jet Propulsion Laboratory in Pasadena, California. "Among the goals that we would like to see if we can accomplish with such a potential partnership is to understand how Venus' climate operates so as to understand the mechanism that has given rise to the rampant greenhouse effect we see today."

The IKI Venera-D mission concept as it stands today would include a Venus orbiter that would operate for up to three years, and a lander designed to survive the incredibly harsh conditions a spacecraft would encounter on Venus' surface for a few hours. The science definition team is also assessing the potential of flying a solar-powered airship in Venus' upper atmosphere. The independent flying vehicle could be released from the Venera-D lander, enter the atmosphere, and independently explore Venus' atmosphere for up to three months.

NASA first visited Venus when the JPL-managed Mariner 2 collected data during a flyby in December 1962. NASA's last dedicated mission to explore Venus was Magellan. Launched in 1990, and managed by JPL, Magellan used radar to map 98 percent of the planet at a resolution of 330 feet (100 meters) or better during its four-year mission.

The Venera spacecraft program is the only one to date to successfully land on Venus and survive its harsh environment. Said Adriana Ocampo, who leads the Joint Science Definition Team at NASA Headquarters in Washington, "This potential collaboration makes for an enriching partnership to maximize the science results from Venera-D, and continue the exploration of this key planet in our solar system."

More information about Venus can be found at: