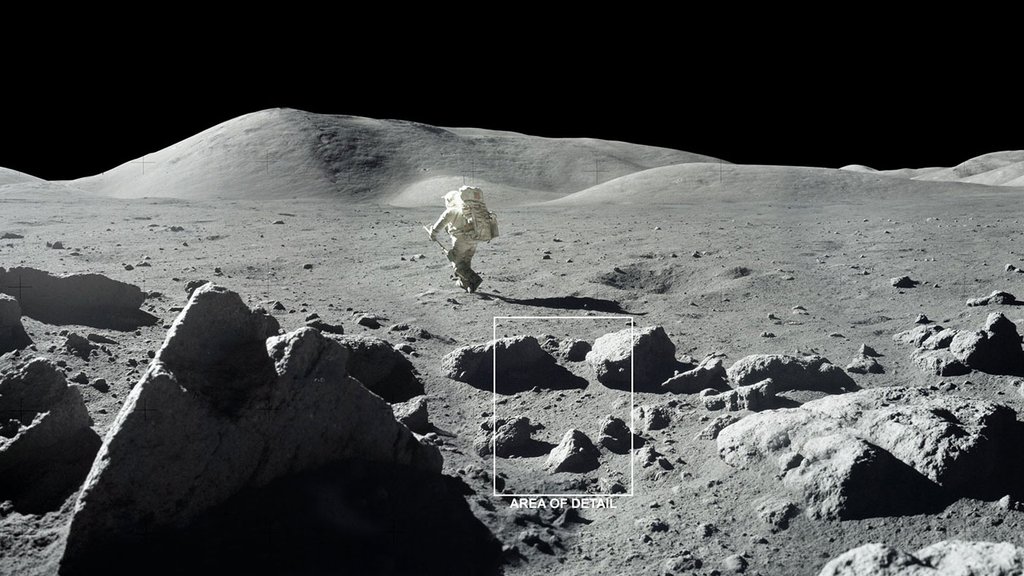 The Moon is covered with craters and rocks, creating a surface “roughness” that casts shadows, as seen in this photograph from the 1972 Apollo 17 mission. These cold shadows may allow water ice to accumulate as frost even at daytime. The area of detail is highlighted in the following illustration. 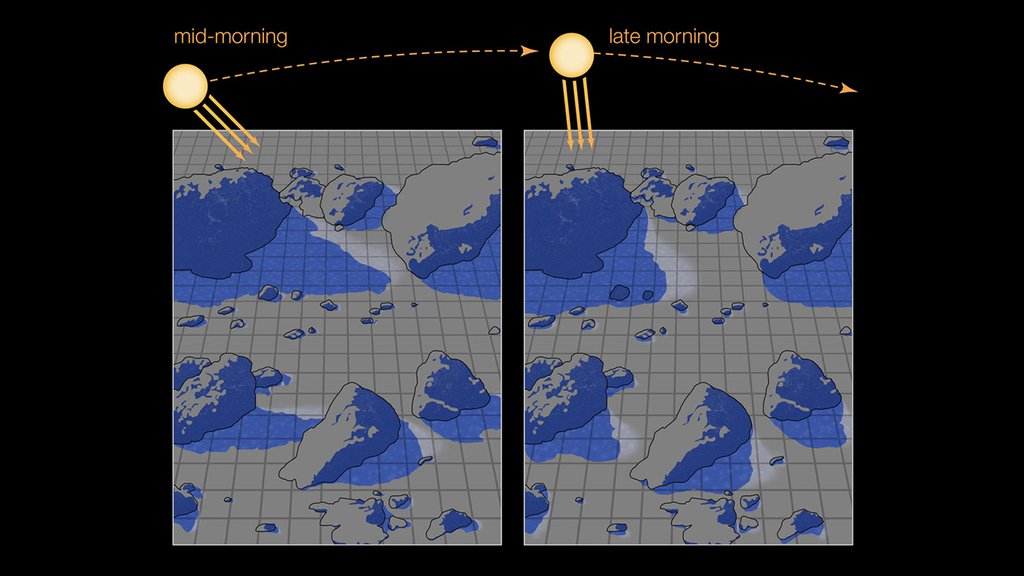 This illustration zooms in on the area of detail indicated in the previous photo, showing how shadows enable water ice to survive on the sunlit lunar surface. When shadows move as the Sun tracks overhead, the exposed frost lingers long enough to be detected by spacecraft. 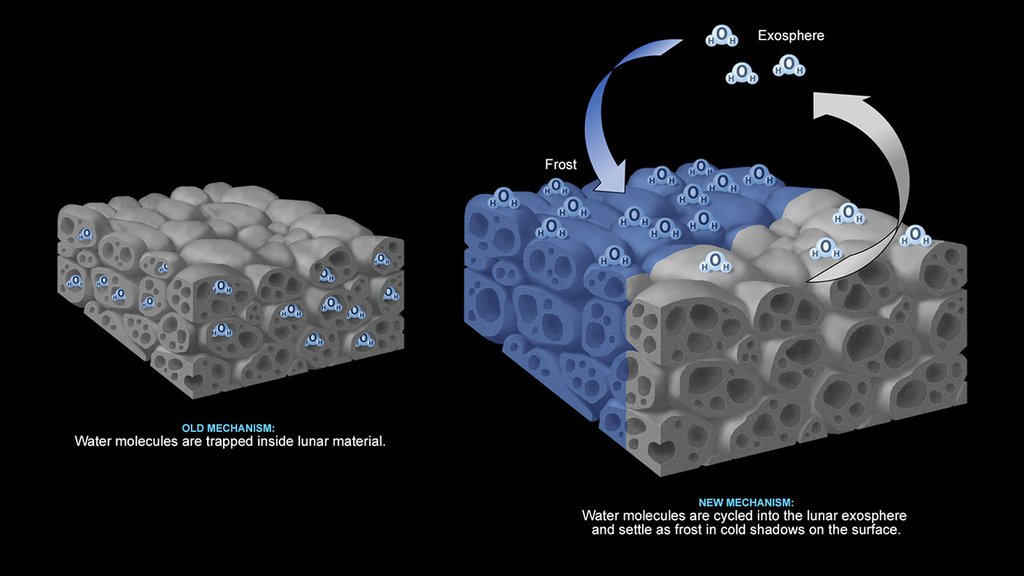 The shadows cast by the roughness of the Moon’s surface create small cold spots for water ice to accumulate even during the harsh lunar daytime.

Scientists are confident that water ice can be found at the Moon’s poles inside permanently shadowed craters – in other words, craters that never receive sunlight. But observations show water ice is also present across much of the lunar surface, even during daytime. This is a puzzle: Previous computer models suggested any water ice that forms during the lunar night should quickly burn off as the Sun climbs overhead.

“Over a decade ago, spacecraft detected the possible presence of water on the dayside surface of the Moon, and this was confirmed by NASA’s Stratospheric Observatory for Infrared Astronomy [SOFIA] in 2020,” said Björn Davidsson, a scientist at NASA’s Jet Propulsion Laboratory in Southern California. “These observations were, at first, counterintuitive: Water shouldn’t survive in that harsh environment. This challenges our understanding of the lunar surface and raises intriguing questions about how volatiles, like water ice, can survive on airless bodies.”

In a new study, Davidsson and co-author Sona Hosseini, a research and instrument scientist at JPL, suggest that shadows created by the “roughness” of the lunar surface provide refuge for water ice, enabling it to form as surface frost far from the Moon’s poles. They also explain how the Moon’s exosphere (the tenuous gases that act like a thin atmosphere) may have a significant role to play in this puzzle.

Many computer models simplify the lunar surface, rendering it flat and featureless. As a result, it’s often assumed that the surface far from the poles heats up uniformly during lunar daytime, which would make it impossible for water ice to remain on the sunlit surface for long.

So how is it that water is being detected on the Moon beyond permanently shadowed regions? One explanation for the detection is that water molecules may be trapped inside rock or the impact glass created by the incredible heat and pressure of meteorite strikes. Fused within these materials, as this hypothesis suggests, the water can remain on the surface even when heated by the Sun while creating the signal that was detected by SOFIA.

But one problem with this idea is that observations of the lunar surface show that the amount of water decreases before noon (when sunlight is at its peak) and increases in the afternoon. This indicates that the water may be moving from one location to another through the lunar day, which would be impossible if they are trapped inside lunar rock or impact glass.

Click on this interactive visualization of the Moon and take it for a spin. The “HD” button in the lower right offers for more detailed textures. The full interactive experience is at Eyes on the Solar System.

Davidsson and Hosseini revised the computer model to factor in the surface roughness apparent in images from the Apollo missions from 1969 to 1972, which show a lunar surface strewn with boulders and pockmarked with craters, creating lots of shady areas even near noon. By factoring this surface roughness into their computer models, Davidsson and Hosseini explain how it’s possible for frost to form in the small shadows and why the distribution of water changes throughout the day.

As the Sun tracks through the lunar day, the surface frost that may accumulate in these cold, shaded areas is slowly exposed to sunlight and cycled into the Moon’s exosphere. The water molecules then refreeze onto the surface, reaccumulating as frost in other cold, shaded locations.

“Frost is far more mobile than trapped water,” said Davidsson. “Therefore, this model provides a new mechanism that explains how water moves between the lunar surface and the thin lunar atmosphere.”

While this isn’t the first study to consider surface roughness when calculating lunar surface temperatures, previous work did not take into account how shadows would affect the capability of water molecules to remain on the surface during daytime as frost. This new study is important because it helps us to better understand how lunar water is released into, and removed from, the Moon’s exosphere.

“Understanding water as a resource is essential for NASA and commercial endeavors for future human lunar exploration,” Hosseini said. “If water is available in the form of frost in sunlit regions of the Moon, future explorers may use it as a resource for fuel and drinking water. But first, we need to figure out how the exosphere and surface interact and what role that plays in the cycle.”

To test this theory, Hosseini is leading a team to develop ultra-miniature sensors to measure the faint signals from water ice. The Heterodyne OH Lunar Miniaturized Spectrometer (HOLMS) is being developed to be used on small stationary landers or autonomous rovers – like JPL’s Autonomous Pop-Up Flat Folding Explorer Robot (A-PUFFER), for example – that may be sent to the Moon in the future to make direct measurements of hydroxyl (a molecule that contains one hydrogen atom and an oxygen atom).

Hydroxyl, which is a molecular cousin of water (a molecule with two hydrogen atoms and one oxygen atom), can serve as an indicator of how much water may be present in the exosphere. Both water and hydroxyl could be created by meteorite impacts and through solar wind particles hitting the lunar surface, so measuring the presence of these molecules in the Moon’s exosphere can reveal how much water is being created while also showing how it moves from place to place. But time is of the essence to make those measurements.

“The current lunar exploration by several nations and private companies indicates significant artificial changes to the lunar environment in the near future,” said Hosseini. “If this trend continues, we will lose the opportunity to understand the natural lunar environment, particularly the water that is cycling through the Moon’s pristine exosphere. Consequently, the advanced development of ultra-compact, high-sensitivity instruments is of critical importance and urgency.”

The researchers point out that this new study could help us better understand the role shadows play in the accumulation of water ice and gas molecules beyond the Moon, such as on Mars or even on the particles in Saturn rings.

The study, titled “Implications of surface roughness in models of water desorption on the Moon”, was published in the Monthly Notices of the Royal Astronomical Society on August 2, 2021.