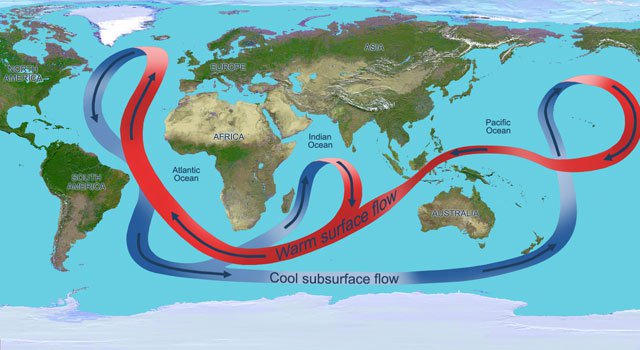 New NASA measurements of the Atlantic Meridional Overturning Circulation, part of the global ocean conveyor belt that helps regulate climate around the North Atlantic, show no significant slowing over the past 15 years.

PASADENA, Calif. - New NASA measurements of the Atlantic Meridional Overturning Circulation, part of the global ocean conveyor belt that helps regulate climate around the North Atlantic, show no significant slowing over the past 15 years. The data suggest the circulation may have even sped up slightly in the recent past.

The findings are the result of a new monitoring technique, developed by oceanographer Josh Willis of NASA's Jet Propulsion Laboratory in Pasadena, Calif., using measurements from ocean-observing satellites and profiling floats. The findings are reported in the March 25 issue of Geophysical Research Letters.

The Atlantic overturning circulation is a system of currents, including the Gulf Stream, that bring warm surface waters from the tropics northward into the North Atlantic. There, in the seas surrounding Greenland, the water cools, sinks to great depths and changes direction. What was once warm surface water heading north turns into cold deep water going south. This overturning is one part of the vast conveyor belt of ocean currents that move heat around the globe.

Without the heat carried by this circulation system, the climate around the North Atlantic -- in Europe, North America and North Africa -- would likely be much colder. Scientists hypothesize that rapid cooling 12,000 years ago at the end of the last ice age was triggered when freshwater from melting glaciers altered the ocean's salinity and slowed the overturning rate. That reduced the amount of heat carried northward as a result.

Until recently, the only direct measurements of the circulation's strength have been from ship-based surveys and a set of moorings anchored to the ocean floor in the mid-latitudes. Willis' new technique is based on data from NASA satellite altimeters, which measure changes in the height of the sea surface, as well as data from Argo profiling floats. The international Argo array, supported in part by the National Oceanic and Atmospheric Administration, includes approximately 3,000 robotic floats that measure temperature, salinity and velocity across the world's ocean.

With this new technique, Willis was able to calculate changes in the northward-flowing part of the circulation at about 41 degrees latitude, roughly between New York and northern Portugal. Combining satellite and float measurements, he found no change in the strength of the circulation overturning from 2002 to 2009. Looking further back with satellite altimeter data alone before the float data were available, Willis found evidence that the circulation had sped up about 20 percent from 1993 to 2009. This is the longest direct record of variability in the Atlantic overturning to date and the only one at high latitudes.

The latest climate models predict the overturning circulation will slow down as greenhouse gases warm the planet and melting ice adds freshwater to the ocean. "Warm, freshwater is lighter and sinks less readily than cold, salty water," Willis explained.

For now, however, there are no signs of a slowdown in the circulation. "The changes we're seeing in overturning strength are probably part of a natural cycle," said Willis. "The slight increase in overturning since 1993 coincides with a decades-long natural pattern of Atlantic heating and cooling."

If or when the overturning circulation slows, the results are unlikely to be dramatic. "No one is predicting another ice age as a result of changes in the Atlantic overturning," said Willis. "Even if the overturning was the Godzilla of climate 12,000 years ago, the climate was much colder then. Models of today's warmer conditions suggest that a slowdown would have a much smaller impact now.

"But the Atlantic overturning circulation is still an important player in today's climate," Willis added. "Some have suggested cyclic changes in the overturning may be warming and cooling the whole North Atlantic over the course of several decades and affecting rainfall patterns across the United States and Africa, and even the number of hurricanes in the Atlantic."

With their ability to observe the Atlantic overturning at high latitudes, Willis said, satellite altimeters and the Argo array are an important complement to the mooring and ship-based measurements currently being used to monitor the overturning at lower latitudes. "Nobody imagined that this large-scale circulation could be captured by these global observing systems," said Willis. "Their amazing precision allows us to detect subtle changes in the ocean that could have big impacts on climate."

For more information about NASA and agency programs, visit: http://www.nasa.gov.