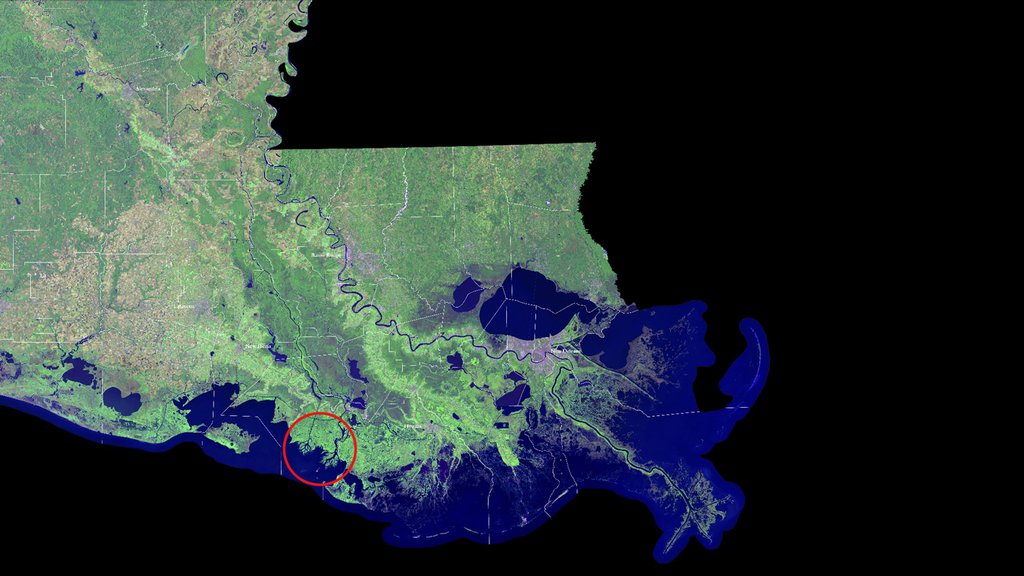 A satellite view of the Louisiana coastline. The two growing deltas, Wax Lake and Atchafalaya, are circled in red. The Mississippi River is the long meandering blue line, farthest right (east).
Credit: USGS/NASA

The Louisiana coastline is sinking under the Gulf of Mexico at the rate of about one football field of land every hour (about 18 square miles of land lost in a year). But within this sinking region, two river deltas are growing. The Atchafalaya River and its diversion channel, Wax Lake Outlet, are gaining about one football field of new land every 11 and 8 hours, respectively (1.5 and 2 square miles per year). Last fall, a team from NASA's Jet Propulsion Laboratory in Pasadena, California, showed that radar, lidar and spectral instruments mounted on aircraft can be used to study the growing deltas, collecting data that can help scientists better understand how coastal wetlands will respond to global sea level rise.

The basics of delta building are understood, but many questions remain about how specific characteristics, such as vegetation types, tides, currents and the shape of the riverbed, affect a delta's growth or demise. That's partly because it's hard to do research in a swamp. "These factors are usually studied using boats and instruments that have to be transported through marshy and difficult terrain," said Christine Rains of JPL, an assistant flight coordinator for the program. "This campaign was designed to show that wetlands can also be measured with airborne remote sensing over a large area."

JPL researchers fly over the Louisiana coastline at least once a year to keep track of subsidence (sinking) and changes in levees. The most recent airborne flights, however, focused on the growing deltas -- specifically, flowing water and vegetation.

JPL's Marc Simard, principal investigator for the campaign, explained that on a delta, water flows in every direction, including uphill. "Water flows not only through the main channels of the rivers but also through the marshes," he explained. "There is also the incoming tide, which pushes water back uphill. The tide enhances the flow of water out of the main channels into the marshes."

The Atchafalaya, the Mississippi and unintended consequences

If humans hadn't intervened, the Atchafalaya River would now be the Mississippi River's outlet to the Gulf of Mexico. The river has changed channels this way six or eight times over the last 5,000 years, but not since European settlers moved in. By the 1960s, the Atchafalaya had captured about 30 percent of the Mississippi's flow. Then engineers went to work. With levees, locks and other structures, they preserved the status quo in concrete. The Atchafalaya still diverts about 30 percent of water from the Mississippi, and the rest still flows down the historic channel. The intervention saved New Orleans and Baton Rouge from being marooned on a giant swamp.

For the two rivers, the new construction had completely different effects. Limiting the volume of the Atchafalaya has kept it and its diversion channel, Wax Lake Outlet, flowing more slowly. In those lazy rivers, sediment can settle and marsh plants can take root, forming new wetlands. On the Mississippi, levees trap sediment, limiting the material for new soil downstream. Levees also accelerate the river's flow speed so that remaining sediment gets shot out the river's mouth into the ocean depths. The Mississippi has lost its capacity to build wetlands naturally.

When the tide goes out, water drains from the marshes, carrying sediment and carbon. The JPL instruments took measurements during both rising and falling tides to capture these flows. They also made the first complete measurement of the slope of the water surface and topography of the river bottom for both rivers from their origin at the Mississippi River to the ocean -- necessary information for understanding the rivers' flow speeds.

Some types of marsh vegetation resist flowing water better than others, as the new measurements have documented. Simard said, "We were really surprised and impressed by how the water level changes within the marshes. In some places, the water changes by 10 centimeters [four inches] in an hour or two. In others, it's only three or four centimeters [an inch or inch-and-a-half]. You can see amazing patterns in the remote sensing measurements."

Three JPL airborne instruments, flying on three planes, were needed to observe the flows and the movement of carbon with the water. The team measured rising and falling water in vegetated areas using the Uninhabited Aerial Vehicle Synthetic Aperture Radar (UAVSAR) instrument. They measured the same changes in open water with the Airborne Snow Observatory (ASO) lidar. The Airborne Visible/Infrared Imaging Spectrometer-Next Generation (AVIRIS-NG) was used to estimate the sediment, carbon and nitrogen concentrations in the water.

Now that the team has demonstrated that these airborne instruments can make precise and detailed measurements in this difficult environment, the researchers plan to use the new data to improve models of how water flows through marshes. Scientists use these models to study how coastal marshes will cope with rising sea levels. With so many measurements available as a reality check, Simard said, "Our models will have to catch up with the observations now."

View a slideshow of the growth of the two deltas over the last 30 years: