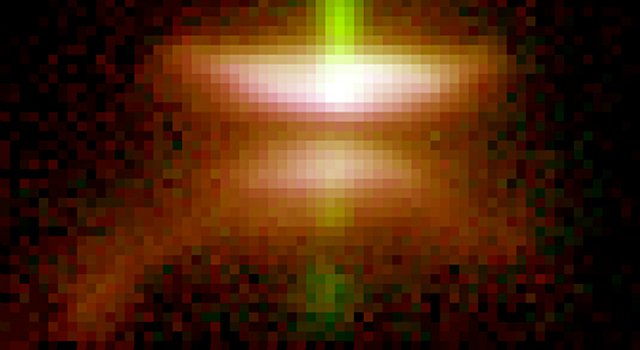 Herbig-Haro 30 is the prototype of a gas-rich "young stellar object" disk around a star. The dark disk spans 40 billion miles (64 billion kilometers) in this image from NASA's Hubble Space Telescope, cutting the bright nebula in two and blocking the central star from direct view. Image credit NASA/Hubble/STScI› Full image and caption

Disk Detective is NASA's largest crowdsourcing project whose primary goal is to produce publishable scientific results. It exemplifies a new commitment to crowdsourcing and open data by the United States government.

Astronomers have used computers to search this haystack of data for planet-forming environments and narrowed the field to about a half-million sources that shine brightly in infrared, indicating they may be "needles": dust-rich disks that are absorbing their star's light and reradiating it as heat.

"Planets form and grow within disks of gas, dust and icy grains that surround young stars, but many details about the process still elude us," said Marc Kuchner, an astrophysicist at NASA's Goddard Space Flight Center in Greenbelt, Md. "We need more examples of planet-forming habitats to better understand how planets grow and mature."

But galaxies, interstellar dust clouds and asteroids also glow in infrared, which stymies automated efforts to identify planetary habitats. There may be thousands of nascent solar systems in the WISE data, but the only way to know for sure is to inspect each source by eye, which poses a monumental challenge.

Public participation in scientific research is a type of crowdsourcing known as citizen science. It allows the public to make critical contributions to the fields of science, technology, engineering and mathematics by collecting, analyzing and sharing a wide range of data. NASA uses citizen science to engage the public in problem-solving.

Kuchner recognized that spotting planetary nurseries is a perfect opportunity for crowdsourcing. He arranged for NASA to team up with the Zooniverse, a collaboration of scientists, software developers and educators who collectively develop and manage citizen science projects on the Internet. The result of their combined effort is Disk Detective.

Disk Detective incorporates images from WISE and other sky surveys in brief animations the website calls flip books. Volunteers view a flip book and classify the object based on simple criteria, such as whether the image is round or includes multiple objects. By collecting this information, astronomers will be able to assess which sources should be explored in greater detail, for example, to search for planets outside our solar system.

"Disk Detective's simple and engaging interface allows volunteers from all over the world to participate in cutting-edge astronomy research that wouldn't even be possible without their efforts," said Laura Whyte, director of citizen science at Adler Planetarium in Chicago, Ill., a founding partner of the Zooniverse collaboration.

The project aims to find two types of developing planetary environments. The first, known as a young stellar object disk, typically is less than 5 million years old, contains large quantities of gas, and often is found in or near young star clusters. For comparison, our own solar system is 4.6 billion years old. The second planetary environment, known as a debris disk, tends to be older than 5 million years, possesses little or no gas, and contains belts of rocky or icy debris that resemble the asteroid and Kuiper belts found in our own solar system. Vega and Fomalhaut, two of the brightest stars in the sky, host debris disks.

WISE was shut down in 2011 after its primary mission was completed. But in September 2013, it was reactivated, renamed Near-Earth Object Wide-field Infrared Survey Explorer (NEOWISE), and given a new mission, which is to assist NASA's efforts to identify the population of potentially hazardous near-Earth objects (NEOs). NEOWISE also can assist in characterizing previously detected asteroids that could be considered potential targets for future exploration missions.

NASA's Jet Propulsion Laboratory in Pasadena, Calif., manages and operates WISE for NASA's Science Mission Directorate. The WISE mission was selected competitively under NASA's Explorers Program managed by the agency's Goddard Space Flight Center. The science instrument was built by the Space Dynamics Laboratory in Logan, Utah. The spacecraft was built by Ball Aerospace & Technologies Corp. in Boulder, Colo. Science operations and data processing take place at the Infrared Processing and Analysis Center at the California Institute of Technology, which manages JPL for NASA.