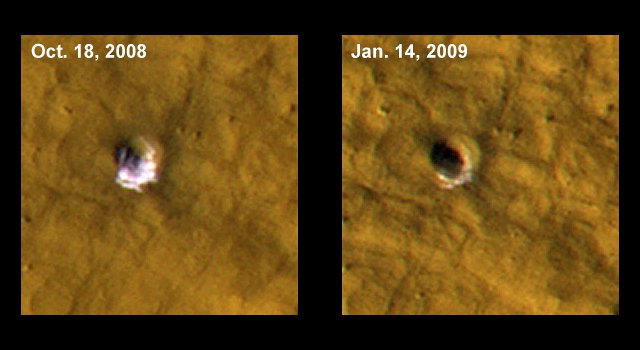 The High Resolution Imaging Science Experiment camera on NASA's Mars Reconnaissance Orbiter took these images of a fresh, 6-meter-wide (20-foot-wide) crater on Mars on Oct. 18, 2008, (left) and on Jan. 14, 2009. Each image is 35 meters (115 feet) across.› See all images
Credit: NASA/JPL-Caltech/University of Arizona

Scientists controlling instruments on the orbiter found bright ice exposed at five Martian sites with new craters that range in depth from approximately half a meter to 2.5 meters (1.5 feet to 8 feet). The craters did not exist in earlier images of the same sites. Some of the craters show a thin layer of bright ice atop darker underlying material. The bright patches darkened in the weeks following initial observations, as the freshly exposed ice vaporized into the thin Martian atmosphere. One of the new craters had a bright patch of material large enough for one of the orbiter's instruments to confirm it is water-ice.

The finds indicate water-ice occurs beneath Mars' surface halfway between the north pole and the equator, a lower latitude than expected in the Martian climate.

"This ice is a relic of a more humid climate from perhaps just several thousand years ago," said Shane Byrne of the University of Arizona, Tucson.

Byrne is a member of the team operating the orbiter's High Resolution Imaging Science Experiment, or HiRISE camera, which captured the unprecedented images. Byrne and 17 co-authors report the findings in the Sept. 25 edition of the journal Science.

"We now know we can use new impact sites as probes to look for ice in the shallow subsurface," said Megan Kennedy of Malin Space Science Systems in San Diego, a co-author of the paper and member of the team operating the orbiter's Context Camera.

During a typical week, the Context Camera returns more than 200 images of Mars that cover a total area greater than California. The camera team examines each image, sometimes finding dark spots that fresh, small craters make in terrain covered with dust. Checking earlier photos of the same areas can confirm a feature is new. The team has found more than 100 fresh impact sites, mostly closer to the equator than the ones that revealed ice.

An image from the camera on Aug. 10, 2008, showed apparent cratering that occurred after an image of the same ground was taken 67 days earlier. The opportunity to study such a fresh impact site prompted a look by the orbiter's higher resolution camera on Sept. 12, 2008, confirming a cluster of small craters.

"Something unusual jumped out," Byrne said. "We observed bright material at the bottoms of the craters with a very distinct color. It looked a lot like ice."

The bright material at that site did not cover enough area for a spectrometer instrument on the orbiter to determine its composition. However, a Sept. 18, 2008, image of a different mid-latitude site showed a crater that had not existed eight months earlier. This crater had a larger area of bright material.

"We were excited about it, so we did a quick-turnaround observation," said co-author Kim Seelos of Johns Hopkins University Applied Physics Laboratory in Laurel, Md. "Everyone thought it was water-ice, but it was important to get the spectrum for confirmation."

The ice exposed by fresh impacts suggests that NASA's Viking Lander 2, digging into mid-latitude Mars in 1976, might have struck ice if it had dug 10 centimeters (4 inches) deeper. The Viking 2 mission, which consisted of an orbiter and a lander, launched in September 1975 and became one of the first two space probes to land successfully on the Martian surface. The Viking 1 and 2 landers characterized the structure and composition of the atmosphere and surface. They also conducted on-the-spot biological tests for life on another planet.

NASA's Jet Propulsion Laboratory in Pasadena manages the Mars Reconnaissance Orbiter for NASA's Science Mission Directorate in Washington. Lockheed Martin Space Systems in Denver built the spacecraft. The Context Camera was built and is operated by Malin Space Science Systems. The University of Arizona operates the HiRISE camera, which Ball Aerospace & Technologies Corp., in Boulder, Colo., built. The Johns Hopkins University Applied Physics Laboratory led the effort to build the Compact Reconnaissance Imaging Spectrometer and operates it in coordination with an international team of researchers.