Ceres rotates in this sped-up movie comprised of images taken by NASA's Dawn mission during its approach to the dwarf planet.› Full image and caption
Credit: NASA/JPL-Caltech/UCLA/MPS/DLR/IDA 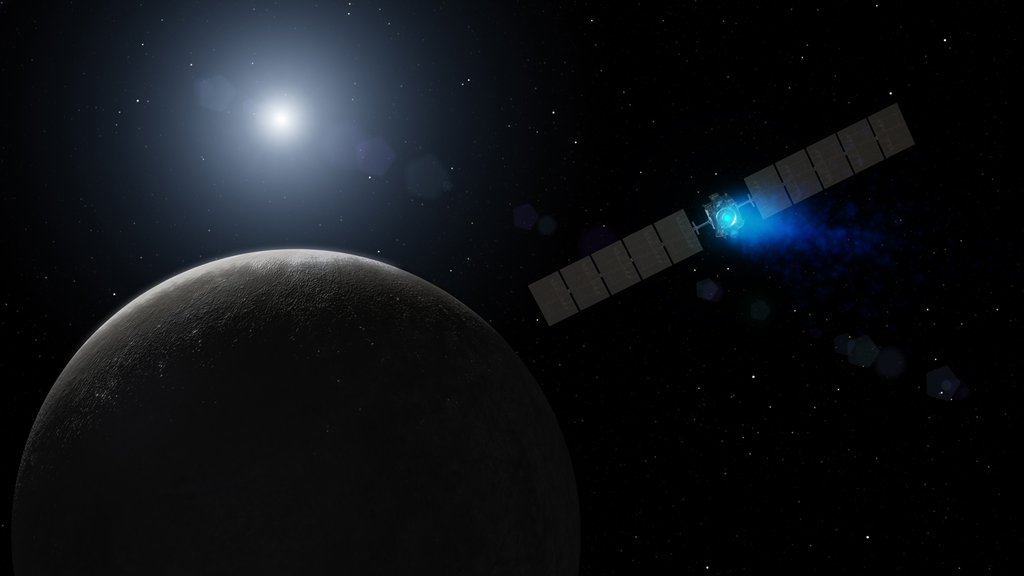 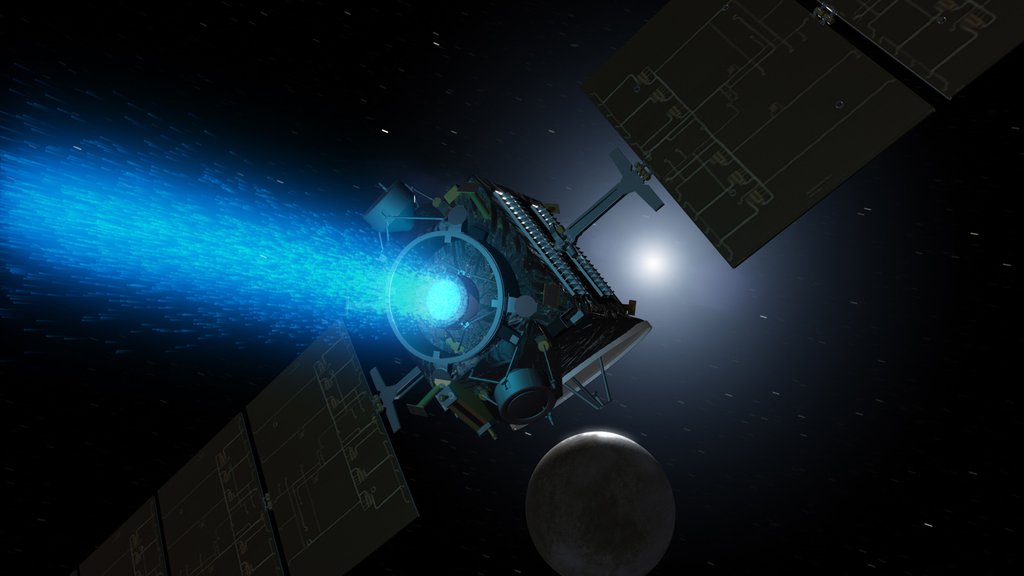 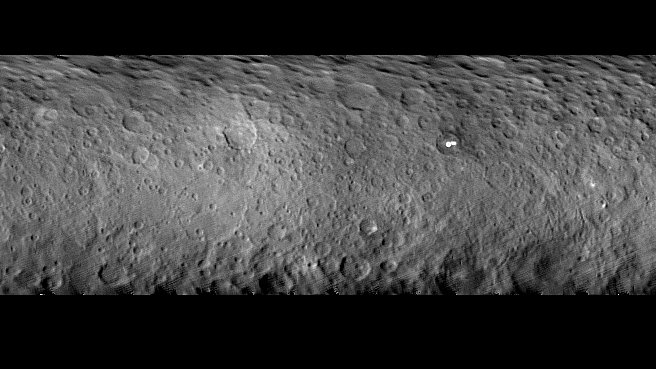 The surface of Ceres is covered with craters of many shapes and sizes, as seen in this mosaic of the dwarf planet.› Full image and caption
Credit: NASA/JPL-Caltech/UCLA/MPS/DLR/IDA 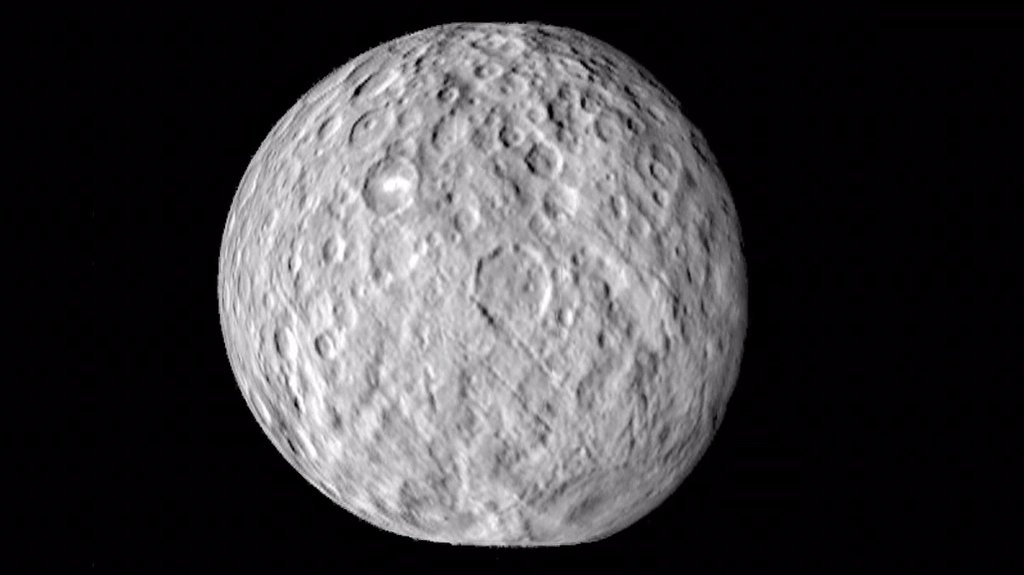 The surface of Ceres is covered with craters of many shapes and sizes, as seen in this new animation of a map of the dwarf planet's surface.› Full image and caption
Credit: NASA/JPL-Caltech/UCLA/MPS/DLR/IDA | 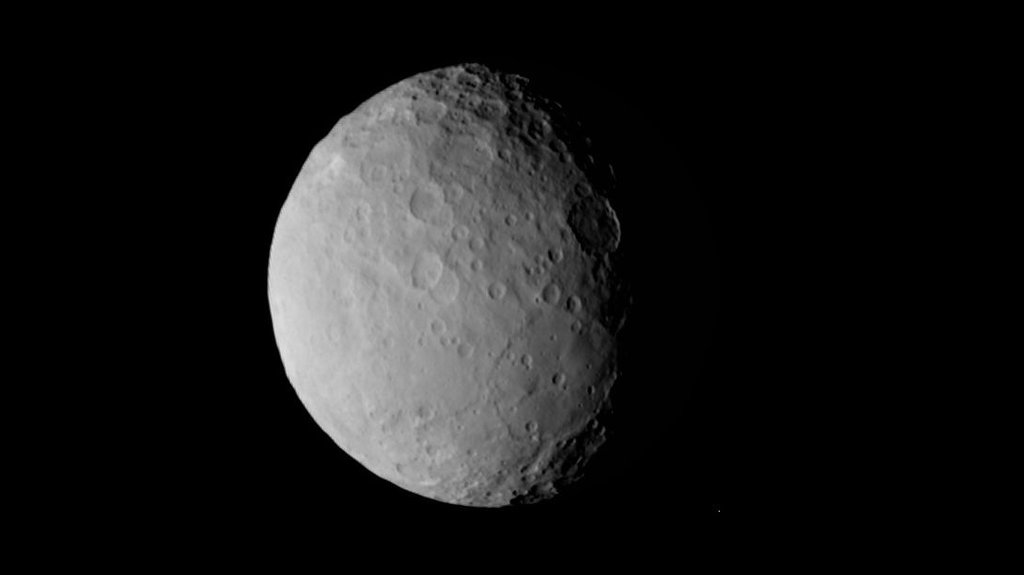 Some might see a pancake, and others a sand dollar, in this new image from NASA's Dawn mission.› Full image and caption
Credit: NASA/JPL-Caltech/UCLA/MPS/DLR/IDA

NASA's Dawn spacecraft has returned new images captured on approach to its historic orbit insertion at the dwarf planet Ceres. Dawn will be the first mission to successfully visit a dwarf planet when it enters orbit around Ceres on Friday, March 6.

"Dawn is about to make history," said Robert Mase, project manager for the Dawn mission at NASA's Jet Propulsion Laboratory in Pasadena, California. "Our team is ready and eager to find out what Ceres has in store for us."

Recent images show numerous craters and unusual bright spots that scientists believe tell how Ceres, the first object discovered in our solar system's asteroid belt, formed and whether its surface is changing. As the spacecraft spirals into closer and closer orbits around the dwarf planet, researchers will be looking for signs that these strange features are changing, which would suggest current geological activity.

"Studying Ceres allows us to do historical research in space, opening a window into the earliest chapter in the history of our solar system," said Jim Green, director of NASA's Planetary Science Division at the agency's Headquarters in Washington. "Data returned from Dawn could contribute significant breakthroughs in our understanding of how the solar system formed."

Dawn began its final approach phase toward Ceres in December. The spacecraft has taken several optical navigation images and made two rotation characterizations, allowing Ceres to be observed through its full nine-hour rotation. Since Jan. 25, Dawn has been delivering the highest-resolution images of Ceres ever captured, and they will continue to improve in quality as the spacecraft approaches.

Sicilian astronomer Father Giuseppe Piazzi spotted Ceres in 1801. As more such objects were found in the same region, they became known as asteroids, or minor planets. Ceres was initially classified as a planet and later called an asteroid. In recognition of its planet-like qualities, Ceres was designated a dwarf planet in 2006, along with Pluto and Eris.

Launched in September 2007, Dawn explored the giant asteroid Vesta for 14 months in 2011 and 2012, capturing detailed images and data about that body. Both Vesta and Ceres orbit the sun between Mars and Jupiter, in the main asteroid belt. This two-stop tour of our solar system is made possible by Dawn's ion propulsion system, its three ion engines being much more efficient than chemical propulsion.

"Both Vesta and Ceres were on their way to becoming planets, but their development was interrupted by the gravity of Jupiter," said Carol Raymond, Dawn deputy principal investigator at JPL. "These two bodies are like fossils from the dawn of the solar system, and they shed light on its origins."

Ceres and Vesta have several important differences. Ceres is the most massive body in the asteroid belt, with an average diameter of 590 miles (950 kilometers). Ceres' surface covers about 38 percent of the area of the continental United States. Vesta has an average diameter of 326 miles (525 kilometers), and is the second most massive body in the belt. The asteroid formed earlier than Ceres and is a very dry body. Ceres, in contrast, is estimated to be 25 percent water by mass.

"By studying Vesta and Ceres, we will gain a better understanding of the formation of our solar system, especially the terrestrial planets and most importantly the Earth," said Raymond. "These bodies are samples of the building blocks that have formed Venus, Earth and Mars. Vesta-like bodies are believed to have contributed heavily to the core of our planet, and Ceres-like bodies may have provided our water."

"We would not be able to orbit and explore these two worlds without ion propulsion," Mase said. "Dawn capitalizes on this innovative technology to deliver big science on a small budget."

In addition to the Dawn mission, NASA will launch in 2016 its Origins-Spectral Interpretation-Resource Identification-Security-Regolith Explorer (OSIRIS-REx) spacecraft. This mission will study a large asteroid in unprecedented detail and return samples to Earth.

NASA also places a high priority on tracking and protecting Earth from asteroids. NASA's Near-Earth Object (NEO) Program at the agency's headquarters manages and funds the search, study and monitoring of asteroids and comets whose orbits periodically bring them close to Earth. NASA is pursuing an Asteroid Redirect Mission (ARM), which will identify, redirect and send astronauts to explore an asteroid. Among its many exploration goals, the mission could demonstrate basic planetary defense techniques for asteroid deflection.

For more information on OSIRIS-REx and ARM visit: