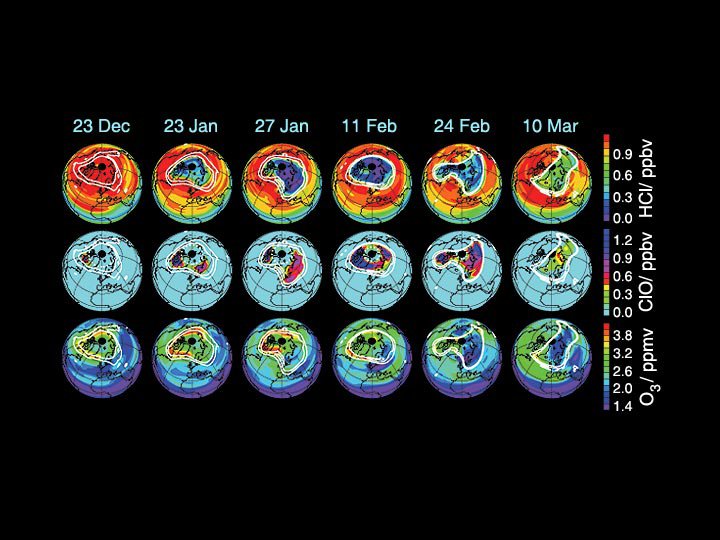 Despite near-record levels of chemical ozone destruction in the Arctic this winter, observations from NASA's Aura spacecraft showed that other atmospheric processes restored ozone amounts to near average and stopped high levels of harmful ultraviolet radiation from reaching Earth's surface.

Despite near-record levels of chemical ozone destruction in the Arctic this winter, observations from NASA's Aura spacecraft showed that other atmospheric processes restored ozone amounts to near average and stopped high levels of harmful ultraviolet radiation from reaching Earth's surface.

Analyses from Aura's Microwave Limb Sounder indicated Arctic chemical ozone destruction this past winter peaked at near 50 percent in some regions of the stratosphere, a region of Earth's atmosphere that begins about 8 to 12 kilometers (5 to 7 miles) above Earth's poles. This was the second highest level ever recorded, behind the 60 percent level estimated for the 1999-2000 winter. Data from another instrument on Aura, the Ozone Monitoring Instrument, found the total amount of ozone over the Arctic this past March was similar to other recent years when much less chemical ozone destruction occurred. So what tempered the ozone loss?  The answer appears to lie in this year's unusual Arctic atmospheric conditions.

"This was one of the most unusual Arctic winters ever," said scientist Dr. Gloria Manney of NASA's Jet Propulsion Laboratory, Pasadena, Calif., who led the Microwave Limb Sounder analyses. "Arctic lower stratospheric temperatures were the lowest on record. But other conditions like wind patterns and air motions were less conducive to ozone loss this year."

While the Arctic polar ozone was being chemically destroyed toward the end of winter, stratospheric winds shifted and transported ozone-rich air from Earth's middle latitudes into the Arctic polar region, resulting in little net change in the total amount of ozone. As a result, harmful ultraviolet radiation reaching Earth's surface remained at near-normal levels.

Imagery and an animation depicting the Microwave Limb Sounder and Ozone Monitoring Instrument 2005 Arctic ozone observations may be viewed at:

Extensive ozone loss occurs each winter over Antarctica (the "ozone hole") due to the extreme cold there and its strong, long-lived polar vortex (a band of winds that forms each winter at high latitudes). This vortex isolates the region from middle latitudes. In contrast, the Arctic winter is warmer and its vortex is weaker and shorter-lived. As a result, Arctic ozone loss has always been lower, more variable and much more difficult to quantify.

This was the first Arctic winter monitored by Aura, which was launched in July 2004. Aura's Microwave Limb Sounder is contributing to our understanding of the processes that cause Arctic wind patterns to push ozone-rich air to the Arctic lower stratosphere from higher altitudes and lower latitudes. Through Aura's findings, scientists can differentiate chemical ozone destruction from ozone level changes caused by air motions, which vary dramatically from year to year.

"Understanding Arctic ozone loss is critical to diagnosing the health of Earth's ozone layer," said Dr. Phil DeCola, Aura program scientist at NASA Headquarters, Washington. "Previous attempts to quantify Arctic ozone loss have suffered from a lack of data. With Aura, we now have the most comprehensive, simultaneous, global daily measurements of many of the key atmospheric gases needed to understand and quantify chemical ozone destruction."

Ozone loss in Earth's stratosphere is caused primarily by chemical reactions with chlorine from human-produced compounds like chlorofluorocarbons. When stratospheric temperatures drop below minus 78 degrees Celsius (minus 108 degrees Fahrenheit), polar stratospheric clouds form. Chemical reactions on the surfaces of these clouds activate chlorine, converting it into forms that destroy ozone when exposed to sunlight.

The data obtained by Aura were independently confirmed by instruments participating in NASA's Polar Aura Validation Experiment, which flew underneath Aura as it passed over the polar vortex. The experiment, flown on NASA's DC-8 flying laboratory from NASA's Dryden Flight Research Center, Edwards, Calif., carried 10 instruments to measure temperatures, aerosols, ozone, nitric acid and other gases.  The experiment was carried out in January and February 2005.

Aura is the third and final major Earth Observing System satellite. Aura carries four instruments: the Ozone Monitoring Instrument, built by the Netherlands and Finland in collaboration with NASA; the High Resolution Dynamics Limb Sounder, built by the United Kingdom and the United States; and the Microwave Limb Sounder and Tropospheric Emission Spectrometer, both built by JPL. Aura is managed by NASA's Goddard Space Flight Center, Greenbelt, Md.

For more information on Aura on the Internet, visit:

For more information on the Microwave Limb Sounder on the Internet, visit: