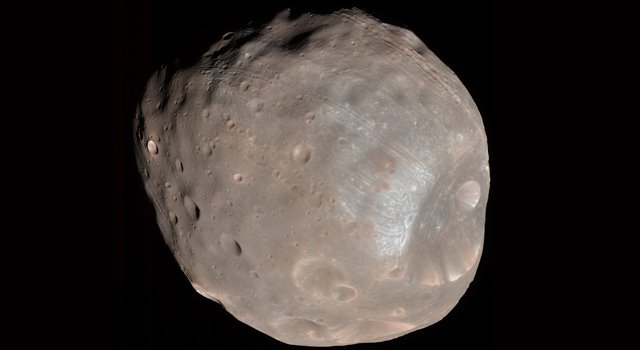 The High Resolution Imaging Science Experiment (HiRISE) camera on NASA's Mars Reconnaissance Orbiter took two images of the larger of Mars' two moons, Phobos, within 10 minutes of each other on March 23, 2008. › Full image and caption

A new stereo view of Phobos, the larger and inner of Mars' two tiny moons, has been captured by a NASA spacecraft orbiting Mars.

PASADENA, Calif. -- A new stereo view of Phobos, the larger and inner of Mars' two tiny moons, has been captured by a NASA spacecraft orbiting Mars.

"Phobos is of great interest because it may be rich in water ice and carbon-rich materials," said Alfred McEwen, HiRISE principal investigator at the Lunar and Planetary Laboratory at the University of Arizona, Tucson.

"But the HiRISE images are higher quality, making the new data some of the best ever for Phobos," said Bridges. "The new images will help constrain the origin and evolution of this moon."

By combining information from the camera's blue-green, red and near-infrared color filters, scientists confirmed that material around the rim of Phobos' largest surface feature, Stickney crater, appears bluer than the rest of Phobos. The impact that excavated the 9-kilometer (about 5.5 mile) in diameter Stickney crater is thought to have almost shattered the moon.

"Based on analogy with material on our own moon, the bluer color could mean that the material is fresher, or hasn't been exposed to space as long as the rest of Phobos' surface has," Bridges said. The new view shows landslides along the walls of Stickney and other large craters: Phobos' striking surface grooves and crater chains; and craters hidden on the moon's dark side illuminated by "Marsshine."

"Marsshine" is sunlight reflected by Mars onto the moon. The phenomenon is similar to "Earthshine," where Earth reflects sunlight that illuminates the dark side of our moon. Like Earth's moon, Mars' moons Phobos and Deimos are "tidally locked" on their planet, that is, they always present the same side to the planet they orbit.

These images are among several new HiRISE images being released today at: http://www.nasa.gov/mission_pages/MRO/multimedia/20080409.html . The images include an anaglyph, or 3D view of Phobos that can be viewed with red-blue glasses.

Phobos was 6,800 kilometers (4,200 miles) away when the HiRISE camera took the first photograph. At that distance, the camera was able to resolve the surface at a scale of 6.8 meters (about 22 feet) per pixel, and see features as small as 20 meters (65 feet) across.

Phobos was 5,800 kilometers (3,600 miles) away when the HiRISE camera took the second picture minutes later. At that distance, the camera was able to resolve features about 15 meters (50 feet) across.

Phobos, only about 22 kilometers (13.5 miles) in diameter, has less than one-thousandth the gravity of Earth. That's not enough gravity to pull the moon into a sphere, so it's oblong. Mars' second moon, Deimos, is even smaller, at about 12 kilometers (7.5 miles) across. The very dark, diminutive moons may be captured asteroids from the outer, carbon-rich, Mars-Jupiter asteroid belt.

The Mars Reconnaissance Orbiter's Compact Reconnaissance Imaging Spectrometer for Mars, observed both Martian moons last year. By combining the data with HiRISE data on Phobos, scientists can map minerals and soil types on the moons.

Information about the Mars Reconnaissance Orbiter spacecraft is online at http://www.nasa.gov/mro .