NASA Spacecraft Get a 360-Degree View of Saturn's Auroras 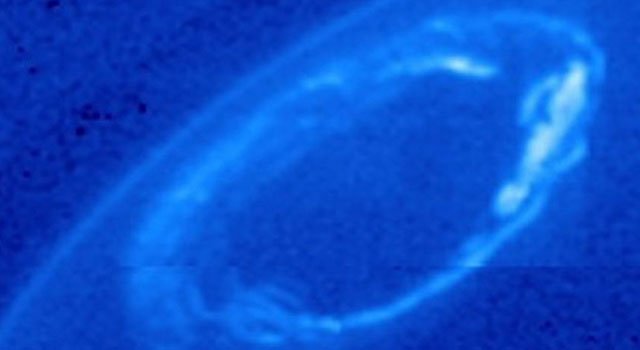 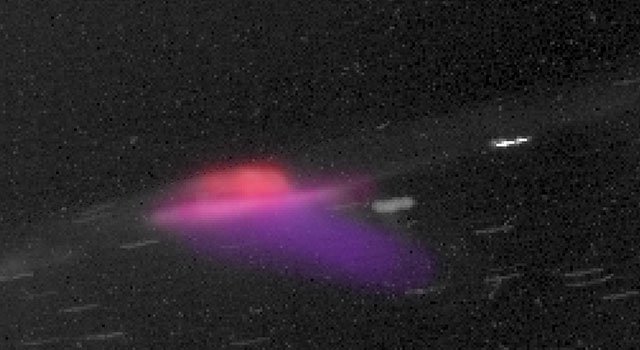 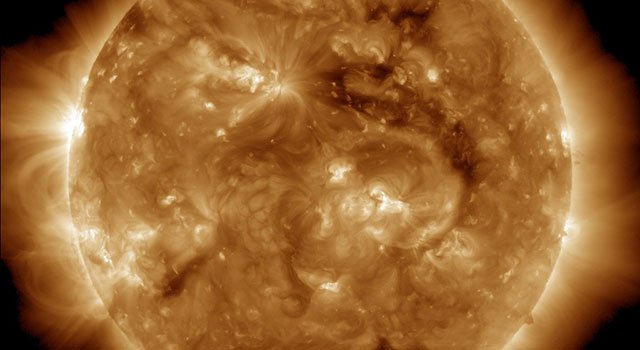 The dark region seen on the face of the sun at the end of March 2013 is a coronal hole (just above and to the right of the middle of the picture), which is a source of fast solar wind leaving the sun.› Full image and caption
Credit: NASA/SDO/AIA

UPDATE -- May 19, 2014: News images of Saturn's aurora from this joint observation, released by the Hubble Space Telescope, are available at: http://www.spacetelescope.org/images/potw1420a/

NASA trained several pairs of eyes on Saturn as the planet put on a dancing light show at its poles. While NASA's Hubble Space Telescope, orbiting around Earth, was able to observe the northern auroras in ultraviolet wavelengths, NASA's Cassini spacecraft, orbiting around Saturn, got complementary close-up views in infrared, visible-light and ultraviolet wavelengths. Cassini could also see northern and southern parts of Saturn that don't face Earth.

The result is a kind of step-by-step choreography detailing how the auroras move, showing the complexity of these auroras and how scientists can connect an outburst from the sun and its effect on the magnetic environment at Saturn. A new video showing aurora images from Hubble and Cassini is available at: http://www.jpl.nasa.gov/video/?id=1277 .

"Saturn's auroras can be fickle -- you may see fireworks, you may see nothing," said Jonathan Nichols of the University of Leicester in England, who led the work on the Hubble images. "In 2013, we were treated to a veritable smorgasbord of dancing auroras, from steadily shining rings to super-fast bursts of light shooting across the pole."

The Hubble and Cassini images were focused on April and May of 2013. Images from Cassini's ultraviolet imaging spectrometer (UVIS), obtained from an unusually close range of about six Saturn radii, provided a look at the changing patterns of faint emissions on scales of a few hundred miles (kilometers) and tied the changes in the auroras to the fluctuating wind of charged particles blowing off the sun and flowing past Saturn.

"This is our best look yet at the rapidly changing patterns of auroral emission," said Wayne Pryor, a Cassini co-investigator at Central Arizona College in Coolidge, Ariz. "Some bright spots come and go from image to image. Other bright features persist and rotate around the pole, but at a rate slower than Saturn's rotation."

The UVIS images, which are also being analyzed by team associate Aikaterini Radioti at the University of Liege, Belgium, also suggest that one way the bright auroral storms may be produced is by the formation of new connections between magnetic field lines. That process causes storms in the magnetic bubble around Earth. The movie also shows one persistent bright patch of the aurora rotating in lockstep with the orbital position of Saturn's moon Mimas. While previous UVIS images had shown an intermittent auroral bright spot magnetically linked to the moon Enceladus, the new movie suggests another Saturn moon can influence the light show as well.

The new data also give scientists clues to a long-standing mystery about the atmospheres of giant outer planets.

"Scientists have wondered why the high atmospheres of Saturn and other gas giants are heated far beyond what might normally be expected by their distance from the sun," said Sarah Badman, a Cassini visual and infrared mapping spectrometer team associate at Lancaster University, England. "By looking at these long sequences of images taken by different instruments, we can discover where the aurora heats the atmosphere as the particles dive into it and how long the cooking occurs."

The visible-light data have helped scientists figure out the colors of Saturn's auroras. While the curtain-like auroras we see at Earth are green at the bottom and red at the top, Cassini's imaging cameras have shown us similar curtain-like auroras at Saturn that are red at the bottom and purple at the top, said Ulyana Dyudina, an imaging team associate at the California Institute of Technology, Pasadena, Calif.

"While we expected to see some red in Saturn's aurora because hydrogen emits some red light when it gets excited, we also knew there could be color variations depending on the energies of the charged particles bombarding the atmosphere and the density of the atmosphere," Dyudina said. "We were thrilled to learn about this colorful display that no one had seen before."

Scientists hope additional Cassini work will illuminate how clouds of charged particles move around the planet as it spins and receives blasts of solar material from the sun.

"The auroras at Saturn are some of the planet's most glamorous features - and there was no escaping NASA's paparazzi-like attention", said Marcia Burton, a Cassini fields and particles scientist at NASA's Jet Propulsion Laboratory, Pasadena, Calif., who is helping to coordinate these observations. "As we move into the part of the 11-year solar cycle where the sun is sending out more blobs of plasma, we hope to sort out the differences between the effects of solar activity and the internal dynamics of the Saturn system."

There is still more work to do. A group of scientists led by Tom Stallard at the University of Leicester is busy analyzing complementary data taken during the same time window by two ground-based telescopes in Hawaii -- the W.M. Keck Observatory and NASA's Infrared Telescope Facility. The results will help them understand how particles are ionized in Saturn's upper atmosphere and will help them put a decade of ground-based telescope observations of Saturn in perspective, because they can see what disturbance in the data comes from Earth's atmosphere.

The Cassini-Huygens mission is a cooperative project of NASA, the European Space Agency and the Italian Space Agency. JPL, a division of the California Institute of Technology, Pasadena, manages the mission for NASA's Science Mission Directorate in Washington. More information about Cassini is available at: http://www.nasa.gov/cassini and http://saturn.jpl.nasa.gov.