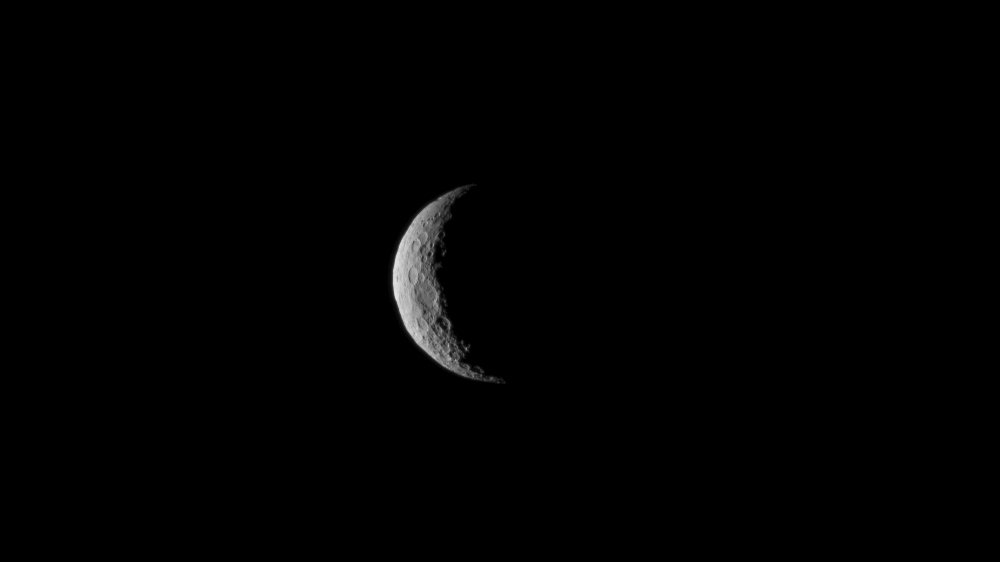 The slim crescent of Ceres smiles back as the dwarf planet awaits the arrival of an emissary from Earth. | › Full image and caption

NASA's Dawn spacecraft has become the first mission to achieve orbit around a dwarf planet.

NASA's Dawn spacecraft has become the first mission to achieve orbit around a dwarf planet. The spacecraft was approximately 38,000 miles (61,000 kilometers) from Ceres when it was captured by the dwarf planet's gravity at about 4:39 a.m. PST (7:39 a.m. EST) Friday.

Mission controllers at NASA's Jet Propulsion Laboratory in Pasadena, California received a signal from the spacecraft at 5:36 a.m. PST (8:36 a.m. EST) that Dawn was healthy and thrusting with its ion engine, the indicator Dawn had entered orbit as planned.

"Since its discovery in 1801, Ceres was known as a planet, then an asteroid and later a dwarf planet," said Marc Rayman, Dawn chief engineer and mission director at JPL. "Now, after a journey of 3.1 billion miles (4.9 billion kilometers) and 7.5 years, Dawn calls Ceres, home."


In addition to being the first spacecraft to visit a dwarf planet, Dawn also has the distinction of being the first mission to orbit two extraterrestrial targets. From 2011 to 2012, the space-craft explored the giant asteroid Vesta, delivering new insights and thousands of images from that distant world. Ceres and Vesta are the two most massive residents of our solar system's main asteroid belt between Mars and Jupiter.

The most recent images received from the spacecraft, taken on March 1, show Ceres as a crescent, mostly in shadow because the spacecraft's trajectory put it on a side of Ceres that faces away from the sun until mid-April. When Dawn emerges from Ceres' dark side, it will deliver ever-sharper images as it spirals to lower orbits around the planet.

"We feel exhilarated," said Chris Russell, principal investigator of the Dawn mission at the University of California, Los Angeles (UCLA). "We have much to do over the next year and a half, but we are now on station with ample reserves, and a robust plan to obtain our science objectives."