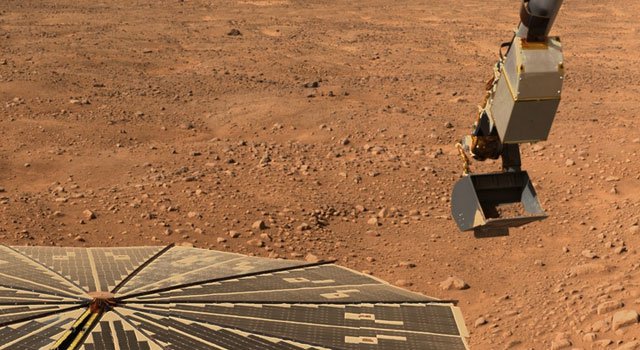 This photograph from June 2008, shows the Robotic Arm on NASA's Phoenix Mars Lander carrying a scoop of Martian soil bound for the spacecraft's microscope.Full image and caption
Credit: NASA/JPL-Caltech/University of Arizona

Within the last month, two samples have been analyzed by the Wet Chemistry Lab of the spacecraft's Microscopy, Electrochemistry, and Conductivity Analyzer, or MECA, suggesting one of the soil constituents may be perchlorate, a highly oxidizing substance. The Phoenix team has been waiting for complementary results from the Thermal and Evolved-Gas Analyzer, or TEGA, which also is capable of detecting perchlorate. TEGA is a series of ovens and analyzers that "sniff" vapors released from substances in a sample.

NASA will hold a media teleconference on Tuesday, Aug. 5, at 11 a.m. PDT (2 p.m. EDT), to discuss these recent science activities. Participants will be introduced at the start of the briefing. To participate in the teleconference, reporters should contact Steve Cole at 202-358-0918 for dial-in and passcode information.

Confirmation of the presence of perchlorate and supporting data is important prior to scientific peer review and subsequent public announcements. The results from Sunday's TEGA experiment, which analyzed a sample taken directly above the ice layer, found no evidence of this compound.

"This is surprising since an earlier TEGA measurement of surface materials was consistent with but not conclusive of the presence of perchlorate," said Peter Smith, Phoenix's principal investigator at the University of Arizona, Tucson.

Scientists at the Phoenix Science Operations Center at the University of Arizona are specifically looking at the data from these instruments to provide information on the composition of Martian soil.

"We are committed to following a rigorous scientific process. While we have not completed our process on these soil samples, we have very interesting intermediate results," said Smith. "Initial MECA analyses suggested Earth-like soil. Further analysis has revealed un-Earthlike aspects of the soil chemistry."

The team also is working to totally exonerate any possibility of the perchlorate readings being influenced by terrestrial sources which may have migrated from the spacecraft, either into samples or into the instrumentation.

Since landing on May 25, Phoenix has been studying Martian soil with MECA's wet chemistry lab, two microscopes and a conductivity probe, TEGA's ovens and two cameras.

MECA's robotic wet chemistry lab studies soluble chemicals in the soil by mixing a soil sample with a water-based solution with several reagents brought from Earth. The inner surface of each cell's beaker has 26 sensors that give information about the acidity or alkalinity and concentrations of elements such as chloride or perchlorate. The beaker also can detect concentrations of magnesium, calcium and potassium, which form salts that are soluble in water.

With continuing results and the spacecraft in good condition, the mission has been extended through Sept. 30. The original prime mission of three months ends in late August. The mission extension adds five weeks to the 90 days of the prime mission.

The Phoenix mission is led by Smith at the University of Arizona with project management at NASA's Jet Propulsion Laboratory in Pasadena, Calif., and development partnership at Lockheed Martin in Denver. International contributions come from the Canadian Space Agency; the University of Neuchatel, Switzerland; the universities of Copenhagen and Aarhus in Denmark; the Max Planck Institute in Germany; and the Finnish Meteorological Institute. For information about Phoenix, visit: http://www.nasa.gov/phoenix.
Latest press images
3D images
Raw images
Latest videos
JPL Phoenix site
NASA Phoenix site
Univ. of Arizona Phoenix site