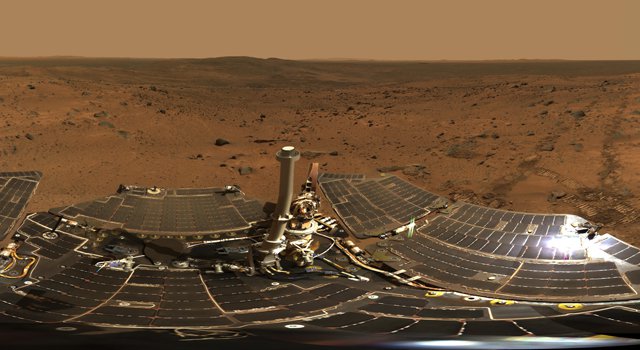 This image taken by the panoramic camera on the Mars Exploration Rover Opportunity shows the view of Victoria Crater from Duck Bay. Opportunity reached Victoria Crater on Sol 951 (September 27, 2006) after traversing 9.28 kilometers (5.77 miles) since her landing site at Eagle Crater. › Full image and caption

NASA and the Smithsonian National Air and Space Museum in Washington are sponsoring events to mark the 10-year anniversary of the Mars Exploration Rovers.

NASA and the Smithsonian National Air and Space Museum (NASM) in Washington are sponsoring events to commemorate 10 years of roving across the Red Planet by the Mars Exploration Rovers (MER).

Anniversary activities will showcase the images and achievements of Spirit and Opportunity, both launched by NASA in the summer of 2003. Activities also will highlight how Mars robotic exploration and discovery will aid plans for a future human mission to Mars.

Spirit and Opportunity completed their three-month prime missions in April 2004 and went on to perform extended missions for years. The rovers made important discoveries about wet environments on ancient Mars that may have been favorable for supporting microbial life. Although Spirit ceased communicating with Earth in March 2010, the Opportunity rover continues its work on the Red Planet.

On Tuesday, Jan. 7, starting at 7:30 a.m. PST (10:30 a.m. EST), NASA and the museum will facilitate two panel discussions on Mars robotic and human missions. Held in the museum's Moving Beyond Earth gallery, participants will discuss the MER program and its scientific successes. Participants also will provide updates on the agency's activities to advance a human mission to Mars in the 2030s.

NASA Television and the agency's website will provide live coverage of the event. The discussion will also be Webcast live at http://www.livestream.com/mars .

The public can ask questions via Twitter using the hashtag #10YrsOnMars.

The museum is featuring a new exhibit, "Spirit & Opportunity: 10 Years Roving Across Mars," with more than 50 mosaic and panoramic photographs taken by the rovers. From a view of the sun setting over the rim of a crater, to a study of "abstract dunes," to a shot of rover tracks disappearing over the horizon, the images were chosen for their scientific and aesthetic content by MER mission team members.

On Thursday, Jan. 16 at 7 p.m. PST (10 p.m. EST), JPL will host a public celebration of a decade of the twin Mars Exploration rovers. The event will be held in the Beckman Auditorium on the California Institute of Technology campus, 1200 E. California Blvd., Pasadena.

The event will be streamed live on the Web at http://ustream.tv/NASAJPL .

Thursday, Jan. 23, 11 a.m. PST (2 p.m. EST), JPL will host a media briefing on the Opportunity rover's decade of exploration.  NASA Television and the agency's website will provide live coverage of the event. Reporters and the public can ask questions from NASA centers and via Twitter using the hashtag #10YrsOnMars.

The discussion will also be webcast live at http://ustream.tv/NASAJPL . For NASA TV streaming video, downlink and scheduling information, visit http://www.nasa.gov/nasatv .

JPL manages the Spirit and Opportunity rovers for NASA's Science Mission Directorate in Washington. For more information on the rovers and the Mars Exploration Program, visit http://www.nasa.gov/mars .