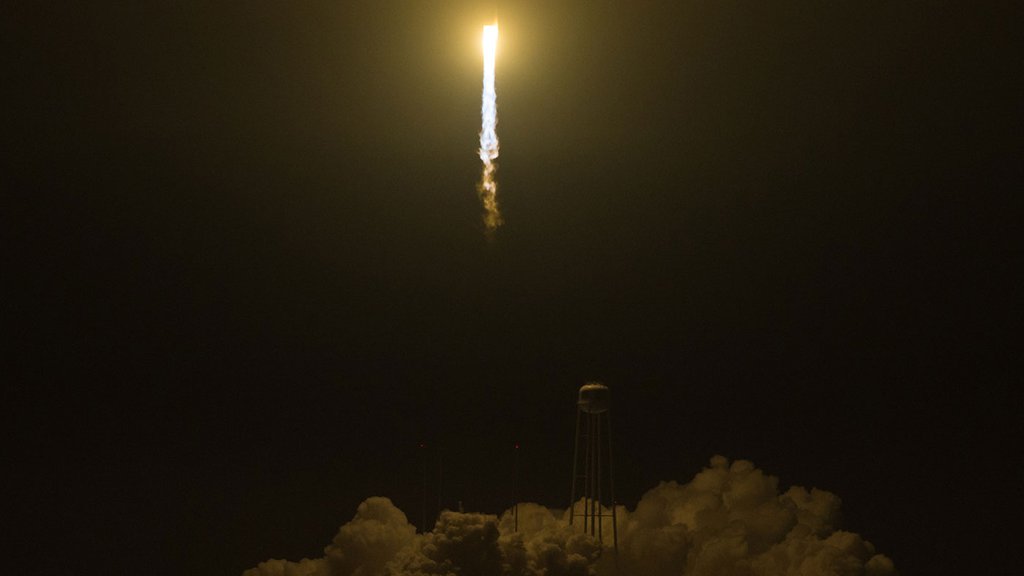 The Orbital ATK Antares rocket, with the Cygnus spacecraft onboard, launches from Pad-0A, Monday, May 21, 2018 at NASA's Wallops Flight Facility in Virginia. Orbital ATK's ninth contracted cargo resupply mission with NASA to the International Space Station will deliver approximately 7,400 pounds of science and research, crew supplies and vehicle hardware to the orbital laboratory and its crew. Photo
Credit: (NASA/Aubrey Gemignani)

A Cygnus cargo vehicle lifted off this morning for the International Space Station. JPL is involved with four of the onboard science payloads.

Cygnus lifted off on an Antares 230 rocket from NASA's Wallops Flight Facility in Virginia on Orbital ATK's ninth cargo mission under NASA's Commercial Resupply Services contract. The spacecraft is carrying about 7,400 pounds of research equipment, cargo and supplies that will support dozens of the more than 250 investigations underway on the space station. NASA's Jet Propulsion Laboratory in Pasadena, California, is involved with four items flying aboard the spacecraft: three Earth-observing CubeSats and an experimental physics facility.

NASA astronauts Scott Tingle and Ricky Arnold will use the space station's robotic arm to capture Cygnus when it arrives at the space station Thursday, May 24. Live coverage of the rendezvous and capture will air on NASA Television and the agency's website beginning at 3:45 a.m. EDT. Installation coverage is set to begin at 7:30 a.m.

Included in the cargo in the pressurized area of Cygnus is a centuries-old method of celestial navigation. The Sextant Navigation investigation will explore the use of a hand-held sextant for emergency navigation on missions in deep space as humans look to travel farther from Earth. The ability to sight angles between the Moon or planets and stars offers crews another option to find their way home if communications and main computers are compromised.

Monitoring crew health and the biological environment of the space station, and understanding long-term effects of space travel on both, are critical to NASA's plans for long-duration, deep space exploration. The Biomolecule Extraction and Sequencing Technology (BEST) study is the agency's next step toward advancing in-space DNA sequencing technologies that can identify microbial organisms living on the space station and understanding how the DNA of humans, plants and microbes are affected by microgravity.BEST will use a process that sequences DNA directly from a sample, with minimal preparation, rather than using the traditional technique of growing a culture from the sample.

In the realm of modern physics, the new Cold Atom Lab (CAL) on Cygnus could help answer some big questions. CAL creates a temperature 10 billion times colder than the vacuum of space, then uses lasers and magnetic forces to slow down atoms until they are almost motionless. In the microgravity environment of the space station, CAL can observe these ultra-cold atoms for much longer than is possible on Earth. Results of this research could lead to a number of improved technologies, including sensors, quantum computers and atomic clocks used in spacecraft navigation.

The Cold Atom Laboratory was designed and built at JPL. It is sponsored by the International Space Station Program at NASA's Johnson Space Center in Houston, and the Space Life and Physical Sciences Research and Applications (SLPSRA) Division of NASA's Human Exploration and Operations Mission Directorate at NASA Headquarters in Washington.

The Cygnus vehicle also carried three CubeSats that will test new technologies for Earth observations. RainCube -- short for "a Radar in a CubeSat" -- is a miniaturized precipitation-studying radar instrument, and the first active radar instrument to be flown on a CubeSat; CubeRRT, the CubeSat Radiometer Radio Frequency Interference Technology Validation mission, will test a technology to reduce radio frequency interference (RFI), a growing problem for space-based instruments used to study things like soil moisture, meteorology, climate and other Earth properties; the TEMPEST-D (Temporal Experiment for Storms and Tropical Systems Demonstration) satellite will validate a miniaturized radiometer technology that could make it possible to use fleets of CubeSats to study developing storms, and provide data to the ground over shorter time intervals than what's possible with large, individual satellites.

Cygnus is scheduled to depart the station in July with several tons of trash and burn up during re-entry into Earth's atmosphere, over the Pacific Ocean. The vehicle is named after James "J.R." Thompson, a leader in the aerospace industry.

For more than 17 years, humans have lived and worked continuously aboard the International Space Station, advancing scientific knowledge and demonstrating new technologies, making research breakthroughs not possible on Earth that will enable long-duration human and robotic exploration into deep space. A global endeavor, more than 200 people from 18 countries have visited the unique microgravity laboratory that has hosted more than 2,400 research investigations from researchers in 103 countries.