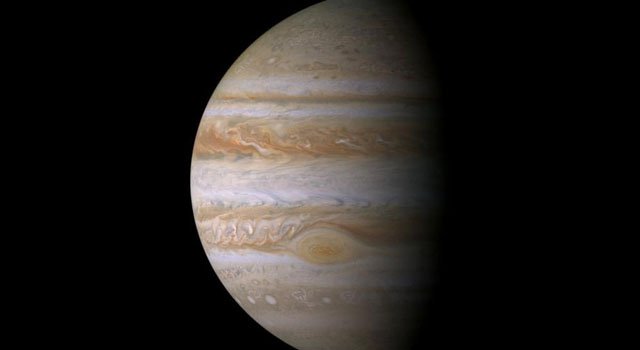 NASA today announced that a mission to fly to Jupiter will proceed to a preliminary design phase. The mission is called Juno, and it is the second in NASA's New Frontiers Program.

NASA today announced that a mission to fly to Jupiter will proceed to a preliminary design phase. The mission is called Juno, and it is the second in NASA's New Frontiers Program.

The mission will conduct an in-depth study of the giant planet. The mission proposes to place a spacecraft in a polar orbit around Jupiter to investigate the existence of an ice-rock core; determine the amount of global water and ammonia present in the atmosphere; study convection and deep wind profiles in the atmosphere; investigate the origin of the jovian magnetic field; and explore the polar magnetosphere.

"We are excited at the prospect of the new scientific understanding and discoveries by Juno in our continued exploration of the outer reaches of our solar system during the next decade," said Dr. Ghassem Asrar, deputy associate administrator for NASA's Science Mission Directorate.

At the end of the preliminary design study, the mission must pass a confirmation review that will address significant schedule, technical and cost risks before being confirmed for the development phase.

NASA selected two proposed mission concepts for study in July 2004 from seven submitted in February 2004 in response to an agency Announcement of Opportunity. "This was a very tough decision given the exciting and innovative nature of the two missions," Asrar added.

The selected New Frontiers science mission must be ready for launch no later than June 30, 2010, within a mission cost cap of $700 million.

The New Frontiers Program is designed to provide opportunities to conduct several of the medium-class missions identified as top priority objectives in the Decadal Solar System Exploration Survey, conducted by the Space Studies Board of the National Research Council.

The first NASA New Frontiers mission will fly by the Pluto-Charon system in 2014 and then target another Kuiper asteroid belt object.

JPL is managed for NASA by the California Institute of Technology in Pasadena.
+ NASA Science Programs
+ NASA home page