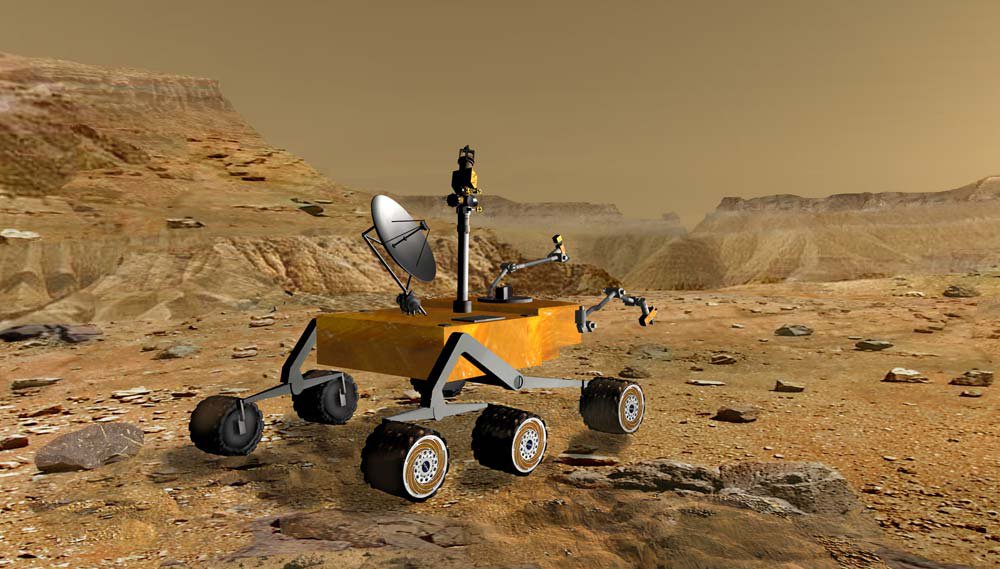 NASA has selected eight proposals to provide instrumentation and associated science investigations for the mobile Mars Science Laboratory rover, scheduled for launch in 2009. Proposals selected today were submitted to NASA in response to an announcement of opportunity released in April.

NASA has selected eight proposals to provide instrumentation and associated science investigations for the mobile Mars Science Laboratory rover, scheduled for launch in 2009. Proposals selected today were submitted to NASA in response to an announcement of opportunity released in April.

The Mars Science Laboratory mission, part of NASA's Mars Exploration Program, would deliver a mobile laboratory to the surface of Mars to explore a local region as a potential habitat for past or present life. The laboratory would operate under its own power. It is expected to remain active for one Mars year, equal to two Earth years, after landing.

In addition to the instrumentation selected, Mars Science Laboratory would carry a pulsed neutron source and detector for measuring hydrogen (including water), provided by the Russian Federal Space Agency. The project would also include a meteorological package and an ultraviolet sensor provided by the Spanish Ministry of Education and Science.

"This mission represents a tremendous leap forward in the exploration of Mars," said NASA's Deputy Associate Administrator for the Science Mission Directorate, Dr. Ghassem Asrar. "MSL is the next logical step beyond the twin Spirit and Opportunity rovers. It will use a unique set of analytical tools to study the red planet for over a year and unveil the past and present conditions for habitability of Mars," Asrar said.

"The Mars Science Laboratory is an extremely capable system, and the selected instruments will bring an analytical laboratory to the martian surface for the first time since the Viking landers over 25 years ago," said Douglas McCuistion, Mars Exploration Program director at NASA Headquarters.

The selected proposals will conduct preliminary design studies to focus on how the instruments can be accommodated on the mobile platform, completed and delivered consistent with the mission schedule. NASA's Jet Propulsion Laboratory, Pasadena, Calif., manages the Mars Science Laboratory Project for the Science Mission Directorate.

-- "Mahli: Mars HandLens Imager for the Mars Science Laboratory," Kenneth Edgett, Malin Space Science Systems. Mahli would image rocks, soil, frost and ice at resolutions 2.4 times better, and with a wider field of view, than the Microscopic Imager on the Mars Exploration Rovers.

-- "The Alpha-Particle-X-ray-Spectrometer for Mars Science Laboratory," Ralf Gellert, Max-Planck-Institute for Chemistry, Mainz, Germany. This instrument would determine elemental abundance of rocks and soil. It will be provided by the Canadian Space Agency.

-- "CheMin: An X-ray Diffraction/X-ray Fluorescence instrument for definitive mineralogical analysis in the Analytical Laboratory of Mars Science Laboratory," David Blake, NASA's Ames Research Center, Moffett Field, Calif. CheMin, would identify and quantify all minerals in complex natural samples such as basalts, evaporites and soils, one of the principle objectives of Mars Science Laboratory.

-- "Radiation Assessment Detector," Donald Hassler, Southwest Research Institute, Boulder, Colo. This instrument would characterize the broad spectrum of radiation at the surface of Mars, an essential precursor to human exploration of the planet. The instrument would be funded by the Exploration Systems Mission Directorate at NASA Headquarters.