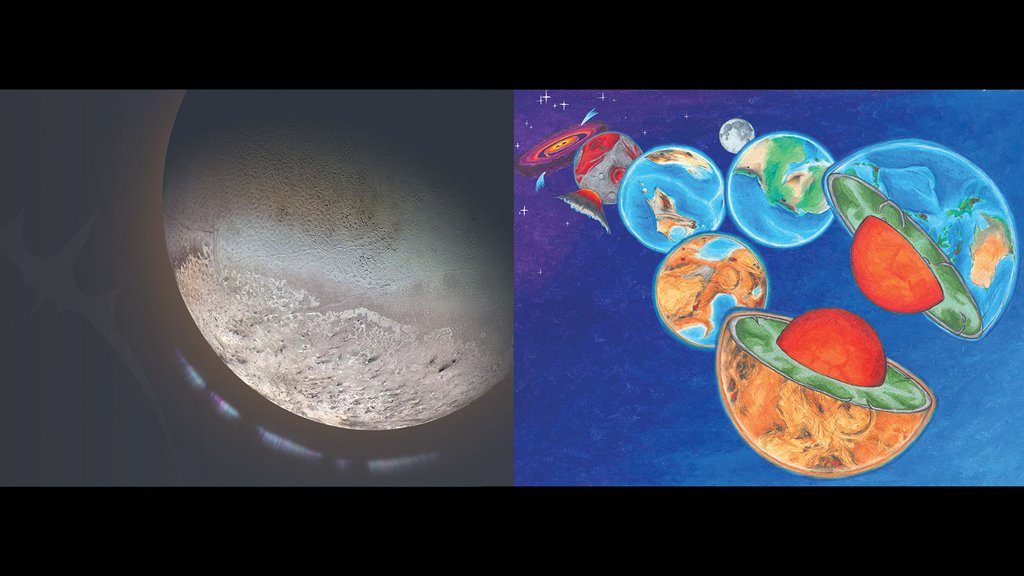 From left: The proposed Trident mission would explore Neptune's moon Triton, seen here in a global color mosaic with an artist's concept of an ionosphere. The proposed VERITAS mission seeks to map the hidden surface of Venus in unprecedented detail.
Credit: NASA/JPL-Caltech ,

Two NASA-JPL proposals are among the selections: Trident would explore Neptune's moon Triton, while Veritas aims to map Venus' surface to determine the planet's geologic history.

NASA has selected four Discovery Program investigations to develop concept studies for new missions. Although they're not official missions yet and some ultimately may not be chosen to move forward, the selections focus on compelling targets and science that are not covered by NASA's active missions or recent selections. Final selections will be made next year.

"These selected missions have the potential to transform our understanding of some of the solar system's most active and complex worlds," said Thomas Zurbuchen, associate administrator of NASA's Science Mission Directorate. "Exploring any one of these celestial bodies will help unlock the secrets of how it, and others like it, came to be in the cosmos."

Each of the four nine-month studies will receive $3 million to develop and mature concepts and will conclude with a Concept Study Report. After evaluating the concept studies, NASA will continue development of up to two missions towards flight.

The proposals were chosen based on their potential science value and feasibility of development plans following a competitive peer-review process.

Trident would explore Triton, a unique and highly active icy moon of Neptune, to understand pathways to habitable worlds at tremendous distances from the Sun. NASA's Voyager 2 mission showed that Triton has active resurfacing - generating the second-youngest surface in the solar system - with the potential for erupting plumes and an atmosphere. Coupled with an ionosphere that can create organic snow and the potential for an interior ocean, Triton is an exciting exploration target to understand how habitable worlds may develop in our solar system and others. Using a single flyby, Trident would map Triton, characterize active processes and determine whether the predicted subsurface ocean exists. Louise Prockter of the Lunar and Planetary Institute/Universities Space Research Association in Houston is the principal investigator. NASA's Jet Propulsion Laboratory in Pasadena, California, would provide project management.

VERITAS would map Venus' surface to determine the planet's geologic history and understand why Venus developed so differently than the Earth. Orbiting Venus with a synthetic aperture radar, VERITAS charts surface elevations over nearly the entire planet to create three-dimensional reconstructions of topography and confirm whether processes, such as plate tectonics and volcanism, are still active on Venus. VERITAS would also map infrared emissions from the surface to map Venus' geology, which is largely unknown. Suzanne Smrekar of NASA's Jet Propulsion Laboratory in Pasadena, California, is the principal investigator. JPL would provide project management.

DAVINCI+ (Deep Atmosphere Venus Investigation of Noble gases, Chemistry, and Imaging Plus)DAVINCI+ would analyze Venus' atmosphere to understand how it formed and evolved and determine whether Venus ever had an ocean. DAVINCI+ plunges through Venus' inhospitable atmosphere to precisely measure its composition down to the surface. The instruments are encapsulated within a purpose-built descent sphere to protect them from the intense environment of Venus. The "+" in DAVINCI+ refers to the imaging component of the mission, which includes cameras on the descent sphere and orbiter designed to map surface rock-type. The last U.S.-led, in-situ mission to Venus was in 1978. The results from DAVINCI+ have the potential to reshape our understanding of terrestrial planet formation in our solar system and beyond. James Garvin of NASA's Goddard Space Flight Center in Greenbelt, Maryland, is the principal investigator. Goddard would provide project management.

IVO would explore Jupiter's moon Io to learn how tidal forces shape planetary bodies. Io is heated by the constant crush of Jupiter's gravity and is the most volcanically active body in the solar system. Little is known about Io's specific characteristics, such as whether a magma ocean exists in its interior. Using close-in flybys, IVO would assess how magma is generated and erupted on Io. The mission's results could revolutionize our understanding of the formation and evolution of rocky, terrestrial bodies, as well as icy ocean worlds in our solar system and extrasolar planets across the universe. Alfred McEwen of the University of Arizona in Tucson is the principal investigator. The Johns Hopkins University Applied Physics Laboratory in Laurel, Maryland, would provide project management.

The concepts were chosen from proposals submitted in 2019 under NASA Announcement of Opportunity (AO) NNH19ZDA010O, Discovery Program. The selected investigations will be managed by the Planetary Missions Program Office at NASA's Marshall Space Flight Center in Huntsville, Alabama, as part of the Discovery Program. The Discovery Program conducts space science investigations in the Planetary Science Division of NASA's Science Mission Directorate, guided by NASA's agency priorities and the Decadal Survey process of the National Academy of Sciences.