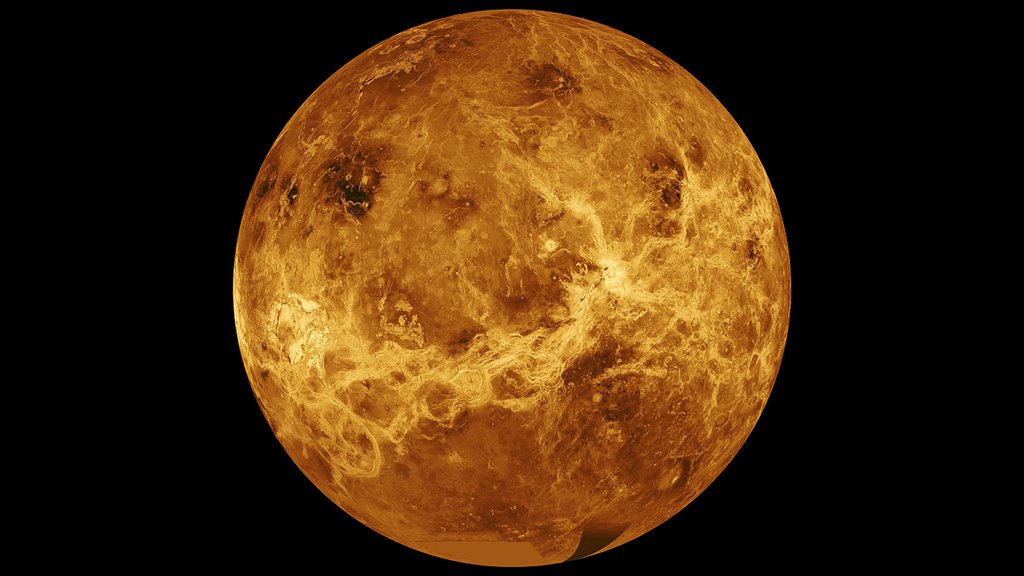 A global view of Venus created from Magellan data and a computer-simulated globe. A JPL-led mission concept study was recently selected to study Venus using a Cubesat.› Full image and caption
Credit: NASA/JPL-Caltech

JPL's concept to study Venus was included among the 10 studies selected.

For these studies, small satellites are defined as less than 180 kilograms in mass (about 400 pounds). CubeSats are built to standard specifications of 1 unit (U), which is equal to about 4x4x4 inches (10x10x10 centimeters). They often are launched into orbit as auxiliary payloads, significantly reducing costs.

"These small but mighty satellites have the potential to enable transformational science," said Jim Green, director of the Planetary Science Division at NASA Headquarters in Washington. "They will provide valuable information to assist in planning future Announcements of Opportunity, and to guide NASA's development of small spacecraft technologies for deep space science investigation."

NASA's Science Mission Directorate is developing a small satellite strategy, with the goal of identifying high-priority science objectives in each discipline that can be addressed with CubeSats and SmallSats, managed for appropriate cost and risk. This multi-disciplinary approach will leverage and partner with the growing commercial sector to collaboratively drive instrument and sensor innovation.

The PSDS3 awardees were recognized this week at the 48th Lunar and Planetary Society Conference in The Woodlands, Texas. The total value of the awards is $3.6 million.

Christophe Sotin, NASA's Jet Propulsion Laboratory, Pasadena, California: Cupid's Arrow, a 66-pound (30-kilogram) probe to measure noble gases and their isotopes to investigate the geological evolution of Venus and why Venus and Earth have evolved so differently.

Benton Clark, Lockheed Martin Space Systems Company, Littleton, Colorado: CubeSat Asteroid Encounters for Science and Reconnaissance (CAESAR), a constellation of 6-unit CubeSats to evaluate the bulk properties of asteroids to assess their physical structure, and to provide constraints on their formation and evolution.

David Minton, Purdue University, West Lafayette, Indiana: Chariot to the Moons of Mars, a 12-unit CubeSat with a deployable drag skirt to produce high-resolution imagery and surface material composition of Phobos and Deimos, to help understand how they were formed.