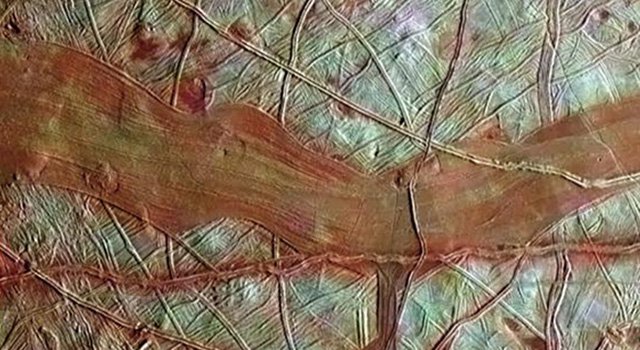 This colorized image of Jupiter's moon Europa is a product of clear-filter grayscale data from one orbit of NASA's Galileo spacecraft, combined with lower-resolution color data taken on a different orbit.› Full image and caption
Credit: NASA/JPL-Caltech/SETI Institute

NASA has issued an Announcement of Opportunity (AO) for proposals about science instruments that could be carried aboard a future mission to Jupiter's moon Europa.

NASA has issued an Announcement of Opportunity (AO) for proposals about science instruments that could be carried aboard a future mission to Jupiter's moon Europa. Selected instruments could address fundamental questions about the icy moon and the search for life beyond Earth.

"The possibility of life on Europa is a motivating force for scientists and engineers around the world," said John Grunsfeld, associate administrator for NASA's Science Mission Directorate at the agency's headquarters in Washington. "This solicitation will select instruments which may provide a big leap in our search to answer the question: are we alone in the universe?"

The AO calls for proposals compatible with a spacecraft that would either orbit or perform multiple flybys of Europa. Spacecraft instruments will be used to conduct high priority scientific investigations addressing the science goals for the moon's exploration outlined in the National Resource Council's (NRC) Planetary Decadal Survey.

The Decadal Survey deemed a mission to Europa among the highest priority scientific pursuits for NASA. It listed five key science objectives in priority order that are necessary to improve our understanding of the potentially habitable moon:

-- Characterize the ice shell and any subsurface water, including their heterogeneity, and the nature of surface-ice-ocean exchange

-- Understand the formation of surface features, including sites of recent or current activity, identify and characterize candidate sites for future detailed exploration

-- Understand Europa's space environment and interaction with the magnetosphere.

While characterizing landing sites for future exploration is the fourth scientific priority in the Planetary Decadal Survey, NASA places high priority on this goal to enable a potential future lander mission to Europa. Current data does not provide sufficient information to identify landing sites and design a landing system capable of safely reaching the surface. In the AO, NASA included a reconnaissance goal to characterize scientifically compelling sites, as well as hazards, for a potential future landed mission to Europa.

"Proposals must be responsive to one or more of the six objectives," said Curt Niebur, Outer Planets Program scientist at NASA Headquarters in Washington. "Plans could be adjusted to programmatic decisions made by NASA in the future."

Any mission to Europa must take into account the harsh radiation environment that would require unique protection of the spacecraft and instruments. In addition, spacecraft must meet planetary protection requirements intended to protect Europa's potentially habitable ocean. These requirements are very strict and involve ensuring that a viable Earth organism is not introduced into the Europa ocean.

Although Europa and Jupiter's other moons have been visited by other spacecraft, they were each limited to a single distant flyby. NASA's Galileo spacecraft, launched in 1989 , was the only mission to make repeated visits to Europa, passing close by the moon less than a dozen times.

The NRC recommended NASA try to reduce the cost and scope of a mission to Europa, and the agency still is working out its plans for such an undertaking. In April, NASA released a request for information for concepts for a mission to Europa that would cost less than $1 billion, excluding the launch vehicle, which could still meet as many of the science priorities as possible. Recent NASA studies have focused on an orbiter mission concept and a multiple flyby mission concept as the most compelling and feasible.

Deadline for submitting proposals to the AO is October 17.

To view the AO in its entirety, visit: http://go.nasa.gov/1p1QU0b