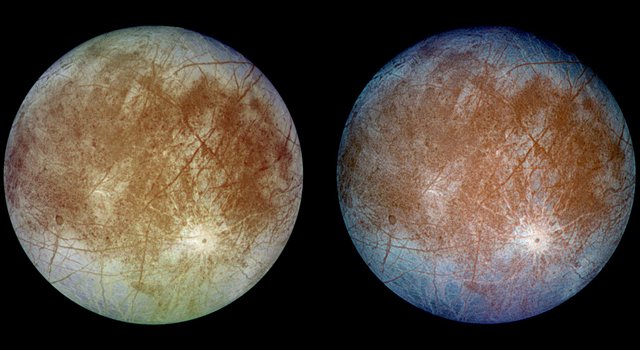 This image shows two views of the trailing hemisphere of Jupiter's ice-covered satellite, Europa. The left image shows the approximate natural color appearance of Europa. The image on the right is a false-color composite version combining violet, green and infrared images to enhance color differences in the predominantly water-ice crust of Europa. › Full image and caption

NASA has issued a Request for Information (RFI) to science and engineering communities for ideas for a mission to Jupiter's enigmatic moon Europa.

NASA has issued a Request for Information (RFI) to science and engineering communities for ideas for a mission to Europa that could address fundamental questions of the enigmatic moon and the search for life beyond Earth.

The RFI's focus is for concepts for a mission to Europa that costs less than $1 billion, excluding the launch vehicle that can meet as many of the science priorities as possible recommended by the National Research Council's 2011 Planetary Science Decadal Survey for the study of Europa.

"This is an opportunity to hear from those creative teams that have ideas on how we can achieve the most science at minimum cost," said John Grunsfeld, associate administrator for the NASA Science Mission Directorate at the agency's headquarters in Washington. "Europa is one of the most interesting sites in our solar system in the search for life beyond Earth. The drive to explore Europa has stimulated not only scientific interest but also the ingenuity of engineers and scientists with innovative concepts."

NASA has studied a variety of mission designs and concepts in previous years and currently is funding the development of technologies that will be needed for the science instruments for a Europa mission. Congress appropriated $80 million for this work in Fiscal Year 2014, and the Fiscal Year 2015 budget proposal requests an additional $15 million.

The Decadal Survey deemed a mission to the Jupiter moon as among the highest priority scientific pursuits for NASA. It lists five key science objectives in priority order that are necessary to improve our understanding of this potentially habitable moon.

The mission will need to:

• Characterize the ice shell and any subsurface water, including their heterogeneity, and the nature of surface-ice-ocean exchange

• Understand the formation of surface features, including sites of recent or current activity, identify and characterize candidate sites for future detailed exploration

• Understand Europa's space environment and interaction with the magnetosphere.

Although Europa and Jupiter's other moons have been visited by other spacecraft, they were each limited to a single distant flyby of these satellites. NASA's Galileo spacecraft, launched in 1989 by the space shuttle, was the only mission to make repeated visits to Europa, passing close by the moon fewer than a dozen times.

In December 2013, NASA's Hubble Space Telescope observed water vapor above the moon's frigid south polar region. This provided the first strong evidence of water plumes erupting off the moon's surface, although researchers are still working to verify the existence of these plumes.

Any mission to Europa must take into account the harsh radiation environment that would require unique protection of the spacecraft and instruments. In addition, spacecraft must meet planetary protection requirements intended to protect Europa's potentially habitable ocean. These requirements are very strict and involve ensuring that a viable Earth organism is not introduced into the Europa ocean.

The RFI is not a request for proposal or formal procurement and therefore is not a solicitation or commitment by the government. Deadline to submit the mission concepts is May 30.

To view the RFI in its entirety, visit: