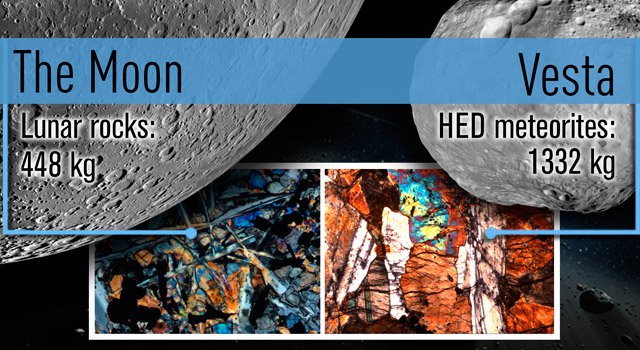 Scientists have now discovered that studying meteorites from the giant asteroid Vesta helps them understand the event known as the "lunar cataclysm," when a repositioning of the gas giant planets destabilized a portion of the asteroid belt and triggered a solar-system-wide bombardment.
Credit: NASA/GSFC/ASU/JPL-Caltech/UCLA/MPS/DLR/IDA

NASA and international researchers have discovered that Earth's moon has more in common than previously thought with large asteroids roaming our solar system.

PASADENA, Calif. - NASA and international researchers have discovered that Earth's moon has more in common than previously thought with large asteroids roaming our solar system.

The research unveils an unexpected link between Vesta and the moon, and provides new means for studying the early bombardment history of terrestrial planets. The findings are published in the March issue of Nature Geoscience.

"It's always intriguing when interdisciplinary research changes the way we understand the history of our solar system," said Yvonne Pendleton, NLSI director. "Although the moon is located far from Vesta, which is in the main asteroid belt between the orbits of Mars and Jupiter, they seem to share some of the same bombardment history."

The findings support the theory that the repositioning of gas giant planets like Jupiter and Saturn from their original orbits to their current location destabilized portions of the asteroid belt and triggered a solar system-wide bombardment of asteroids billions of years ago, called the lunar cataclysm.

The research provides new constraints on the start and duration of the lunar cataclysm, and demonstrates that the cataclysm was an event that affected not only the inner solar system planets, but the asteroid belt as well.

Researchers have linked these two datasets and found that the same population of projectiles responsible for making craters and basins on the moon were also hitting Vesta at very high velocities, enough to leave behind a number of telltale, impact-related ages.

The team's interpretation of the howardites and eucrites was augmented by recent close-in observations of Vesta's surface by NASA's Dawn spacecraft. In addition, the team used the latest dynamical models of early main belt evolution to discover the likely source of these high velocity impactors. The team determined that the population of projectiles that hit Vesta had orbits that also enabled some objects to strike the moon at high speeds.

"It appears that the asteroidal meteorites show signs of the asteroid belt losing a lot of mass four billion years ago, with the escaped mass beating up on both the surviving main belt asteroids and the moon at high speeds" says lead author Simone Marchi, who has a joint appointment between two of NASA's Lunar Science Institutes, one at the Southwest Research Institute in Boulder, Colo., and another at the Lunar and Planetary Institute in Houston. "Our research not only supports the current theory, but it takes it to the next level of understanding."

The NLSI is headquartered at NASA Ames Research Center, Moffett Field, Calif. The Dawn mission to Vesta and Ceres is managed by NASA's Jet Propulsion Laboratory, Pasadena, Calif., for NASA's Science Mission Directorate, Washington. Dawn is a project of the directorate's Discovery Program, managed by NASA's Marshall Space Flight Center in Huntsville, Ala.

For more information about the Dawn mission, visit: www.nasa.gov/dawn .