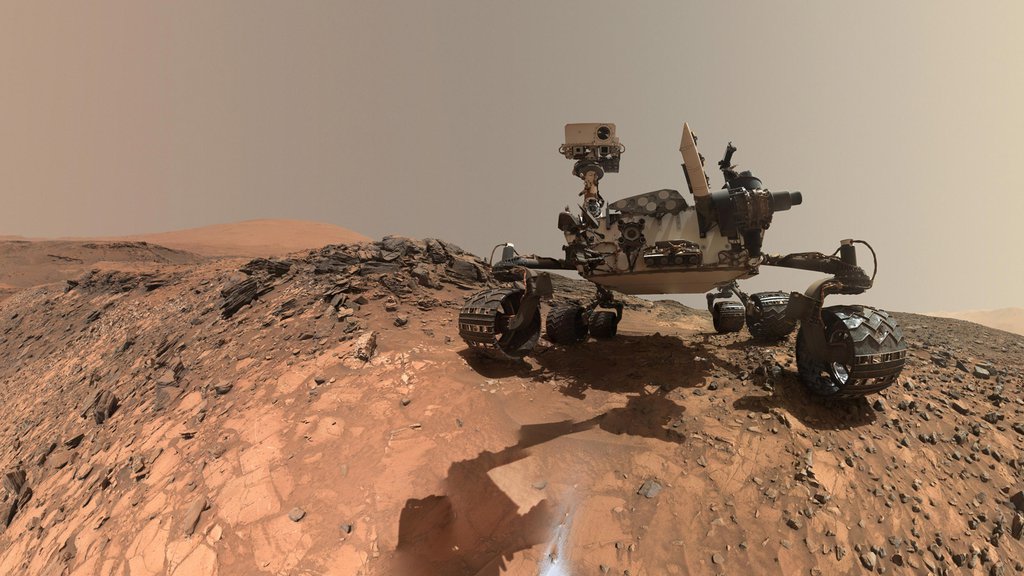 This low-angle self-portrait of NASA's Curiosity Mars rover shows the vehicle at the site from which it reached down to drill into a rock target called "Buckskin." Bright powder from that July 30, 2015, drilling is visible in the foreground.› Full image and caption
Credit: NASA/JPL-Caltech/MSSS

NASA's Mars Science Laboratory rover, Curiosity, has been exploring sedimentary rocks within Gale Crater since landing in August 2012. In July 2015, on Sol 1060 (the number of Martian days since landing), the rover collected powder drilled from rock at a location named "Buckskin." Analyzing data from an X-ray diffraction instrument on the rover that identifies minerals, scientists detected significant amounts of a silica mineral called tridymite.

This detection was a surprise to the scientists, because tridymite is generally associated with silicic volcanism, which is known on Earth but was not thought to be important or even present on Mars.

The discovery of tridymite might induce scientists to rethink the volcanic history of Mars, suggesting that the planet once had explosive volcanoes that led to the presence of the mineral.

Scientists in the Astromaterials Research and Exploration Science (ARES) Division at NASA's Johnson Space Center in Houston led the study. A paper on the team's findings has been published in the Proceedings of the National Academy of Sciences.

"On Earth, tridymite is formed at high temperatures in an explosive process called silicic volcanism. Mount St. Helens, the active volcano in Washington State, and the Satsuma-Iwojima volcano in Japan are examples of such volcanoes. The combination of high silica content and extremely high temperatures in the volcanoes creates tridymite," said Richard Morris, NASA planetary scientist at Johnson and lead author of the paper. "The tridymite was incorporated into 'Lake Gale' mudstone at Buckskin as sediment from erosion of silicic volcanic rocks."

The paper also will stimulate scientists to re-examine the way tridymite forms. The authors examined terrestrial evidence that tridymite could form at low temperatures from geologically reasonable processes and not imply silicic volcanism. They found none. Researchers will need to look for ways that it could form at lower temperatures.

"I always tell fellow planetary scientists to expect the unexpected on Mars," said Doug Ming, ARES chief scientist at Johnson and co-author of the paper. "The discovery of tridymite was completely unexpected. This discovery now begs the question of whether Mars experienced a much more violent and explosive volcanic history during the early evolution of the planet than previously thought."

To learn more about the ARES Division, go to: