NASA Scientist Over the Moon With Homegrown Radish Research 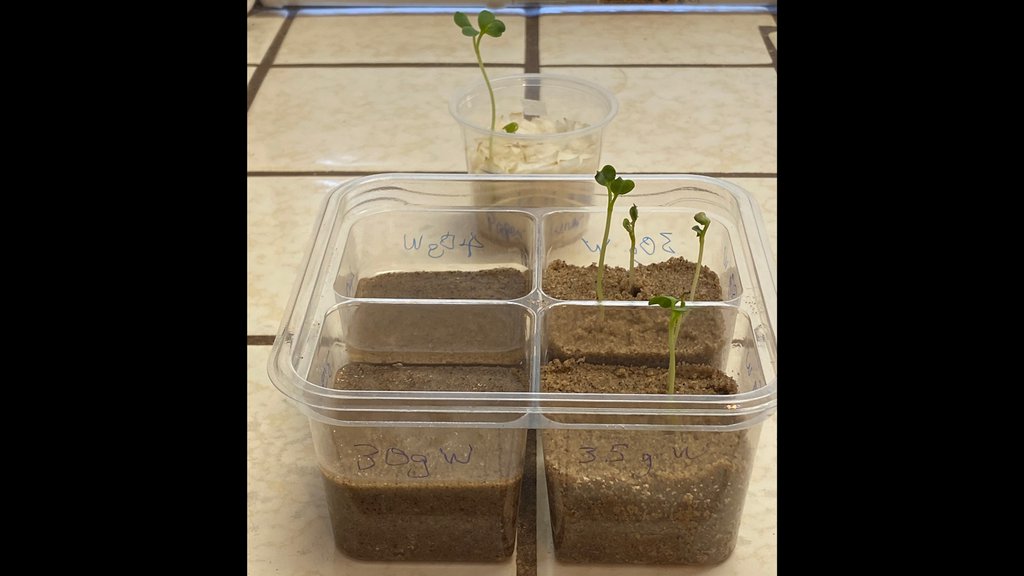 Radishes in the section with the least water germinated first and best.
Credit: NASA/JPL-Caltech 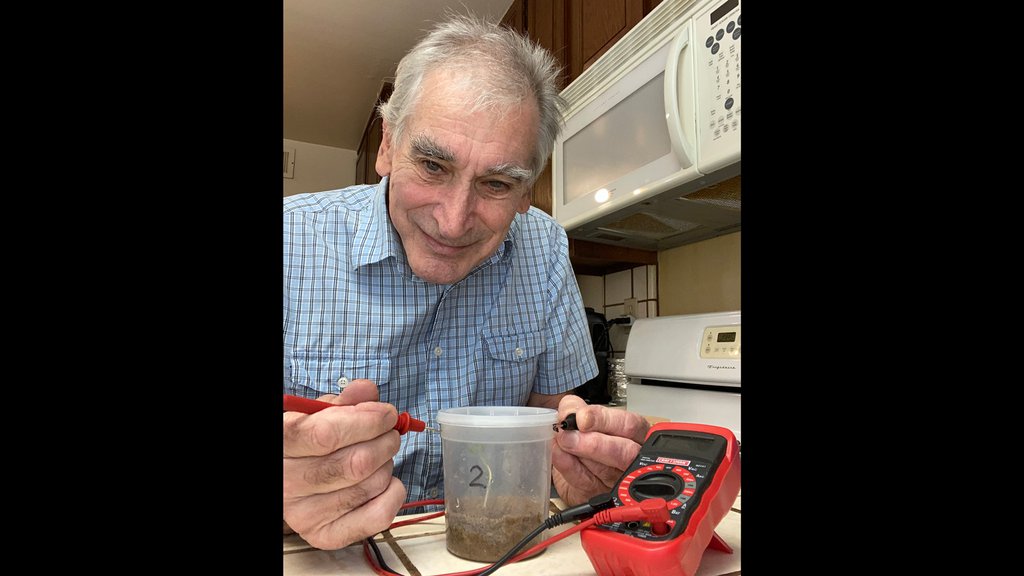 How two video meetings, two online purchases, and a kitchen counter led to what could be "one small step" for future astronauts to grow food on the Moon.

While others have perfected sourdough starter or whipped up chocolate chip cookies during the pandemic, NASA scientist Max Coleman has been toiling in his kitchen over containers of baby radishes - all in the name of science.

"They have been used before in space, and they germinate very, very fast," Coleman says.

Previously, other researchers had sent radishes to the International Space Station, and now, Coleman and his colleagues hope to help the quest for astronauts to eventually grow their own food on the lunar surface. 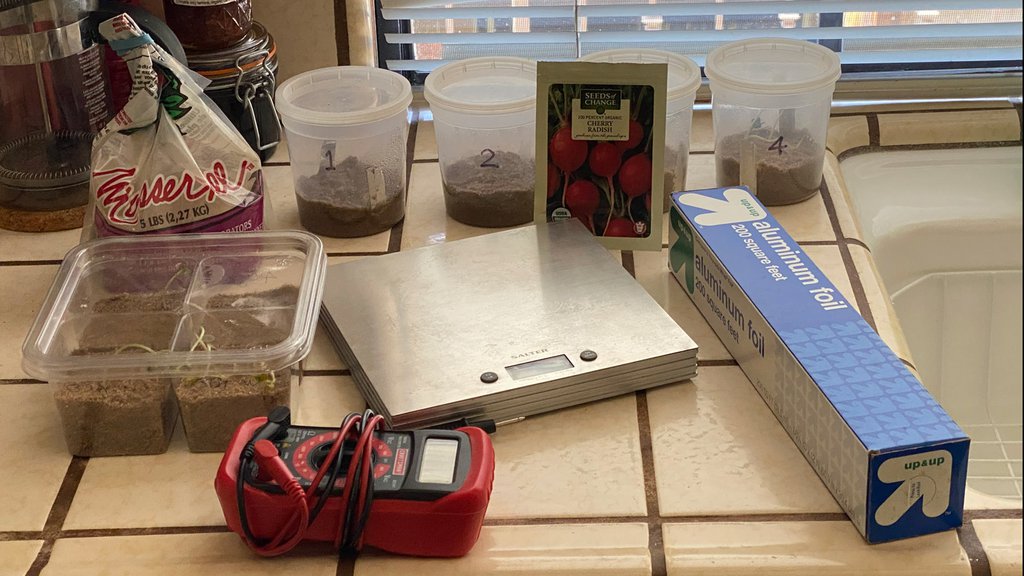 The team of 13 is trying to simulate - physically and chemically - lunar surface soil, or regolith, here on Earth, including such details as how quickly water is absorbed between lunar soil grains, how big the particles are, and what proportions of minerals are ideal.

Coleman and team spent over a year doing their research at NASA's Jet Propulsion Laboratory in Southern California and were about to start hands-on tests of sensors that might eventually be used on the Moon. Mandatory telework in response to the coronavirus interrupted those plans.

Then, one day in April during a video team meeting from home, an idea sprouted in Coleman's head for a homemade radish lab. They were discussing how they could, hypothetically, try growing some radishes with no nutrients and some with a small amount of nutrients.

"Let's not theorize about this; why don't we just do it!" was Coleman's battle cry. And before the virtual meeting had ended, he had bought a batch of radish seeds online to be delivered to his home. A subsequent video meeting prompted another impulse buy. "Video chats clearly stimulate me," Coleman jokes. This time, it was desert sand, which is often sold to be used as a top layer to make indoor potted plants look pretty.

Armed with the radish seeds and desert sand, Coleman was ready for serious business.

"We're trying to show astronauts can use horticulture to grow their own food on the Moon," he explains. "We want to do one tiny step in that direction, to show that lunar soil contains stuff which can be extracted from it as nutrients for plants. This includes getting the right chemical elements to allow plants to make chlorophyll and grow cell walls."

Because the Moon always faces Earth as it orbits our planet every month, it is essentially turning on its axis once a month. The lunar timeline (one Moon day equals 28 Earth days, 14 days of daylight) makes quick-sprouting radishes a good bet for relatively rapid experiment results. It will be possible to complete the experiment in one lunar day, starting just after dawn.

Research in the Home Kitchen

Coleman started his first radish experiment by cutting paper towels into small squares, adding water, stuffing them into a container, then tucking in three radish seeds at a depth of half an inch. Only one sprouted - apparently the one that somehow got enough oxygen to germinate. Once the sand arrived, Coleman ditched the paper towels and started using it in a four-compartment deli container.

He put varying amounts of water in the four sections. The result: Radishes in the section with the least water germinated first and best, which was interesting because, he says, "we want to see how little water we can get away with." Coleman adds, "This immediately had an impact on how we would do the experiment with water and lunar soil if we get it to the Moon." He considers this an example of serendipity in research.

Coleman also raided the kitchen for chopsticks to make holes in the soil surface for each seed. And at one point, he added kitchen-counter "electrodes" to measure moisture levels and track evaporation in the desert sand: He folded aluminum foil four or five times to make a strip, then used his battery tester to measure electrical resistance from the water.

The team's research is aimed at biological in-situ resource utilization - tackling such challenges as where to get food as opposed to how to get water and oxygen. Coleman explains that, for future astronauts, "the more you can use what's already there, the more efficient you can be because you don't have to carry that much with you." Their specific work is to develop a small payload on a commercial spacecraft going to the Moon, which, if selected, would be delivered to the lunar surface through the NASA Commercial Lunar Payload Services (CLPS) initiative. The team planned to develop the experiment as a suitable payload for a CLPS spacecraft in terms of size, mass, power requirement, and communication needs.

By going to the Moon, the radish experiment would complement plant predecessors tested under microgravity conditions on the space station. For example, the currently flying Vegetable Production System, or Veggie, features plants growing in specially prepared soil, with the goal of eventually providing food for space station astronauts.

"We can't properly test here on Earth with perfect lunar soil, but we're doing as much here as we can. Then we want to show that it actually does work on the Moon," Coleman says.

Principal Investigator Pamela E. Clark leads the JPL radish research team, which includes John Elliott, who started the project, and Gerald Voecks, who works with Coleman on measurements. Together, they're designing the potential Moon experiment and a payload that would put lunar soil in a chamber, where water and air would be added in an attempt to raise radishes. JPL's Human/Robotic and Emerging Capabilities Office is funding the current work.

Coleman has been documenting the sprouting radish experiment with his smartphone and sharing the progress with his 7-year-old granddaughter, Lillibette, in England. He even ordered a second radish-seed purchase for her. Her response to her grandfather? "I could plant them and eat radishes, or I could plant them and do what you're doing."

Coleman says that if the lunar payload concept were to fly someday, Lillibette and other children might be able to follow the mission. The team plans to include a small, simple camera, and make images and other data available so that, as he envisions it, "kids of Earth can watch radishes grow on the Moon."