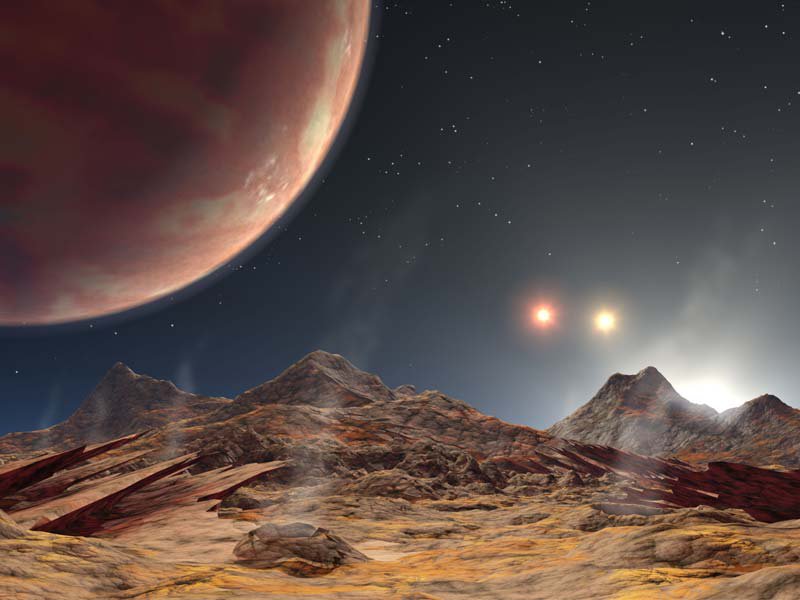 This artist's animation shows the view from a hypothetical moon in orbit around the first known planet to reside in a tight-knit triple-star system. The gas giant planet, discovered using the Keck I telescope atop Mauna Kea in Hawaii, zips around a single star that is orbited by a nearby pair of pirouetting stars. + Quicktime movie showing hypothetical moon with three sunsets 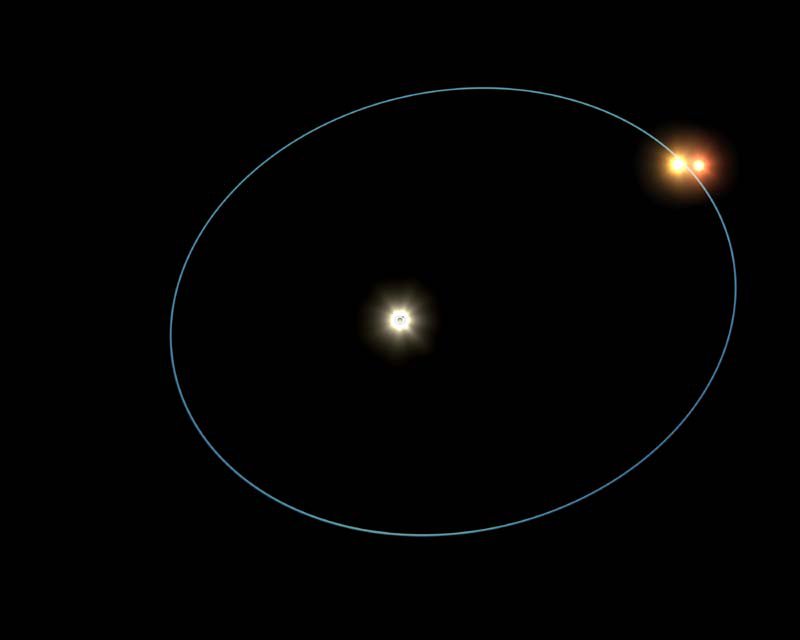 This artist's concept shows the orbits of a triple-star system called HD 188753, which was discovered to harbor a gas giant, or "hot Jupiter," planet. + Quicktime movie showing hypothetical moon with three sunsets

A NASA-funded astronomer has discovered a world where the sun sets over the horizon, followed by a second sun and then a third.

A NASA-funded astronomer has discovered a world where the sun sets over the horizon, followed by a second sun and then a third. The new planet, called HD 188753 Ab, is the first known to reside in a classic triple-star system.

"The sky view from this planet would be spectacular, with an occasional triple sunset," said Dr. Maciej Konacki (MATCH-ee Konn-ATZ-kee) of the California Institute of Technology, Pasadena, Calif., who found the planet using the Keck I telescope atop Mauna Kea mountain in Hawaii. "Before now, we had no clues about whether planets could form in such gravitationally complex systems."

The finding, reported in this week's issue of Nature, suggests that planets are more robust than previously believed.

"This is good news for planets," said Dr. Shri Kulkarni, who oversees Konacki's research at Caltech. "Planets may live in all sorts of interesting neighborhoods that, until now, have gone largely unexplored." Kulkarni is the interdisciplinary scientist for NASA's planned SIM PlanetQuest mission, which will search for signs of Earth-like worlds.

Systems with multiple stars are widespread throughout the universe, accounting for more than half of all stars. Our Sun's closest star, Alpha Centauri, is a member of a trio.

"Multiple-star systems have not been popular planet-hunting grounds," said Konacki. "They are difficult to observe and were believed to be inhospitable to planets."

The new planet belongs to a common class of extrasolar planets called "hot Jupiters," which are gas giants that zip closely around their parent stars. In this case, the planet whips every 3.3 days around a star that is circled every 25.7 years by a pirouetting pair of stars locked in a 156-day orbit.

The circus-like trio of stars is a cramped bunch, fitting into the same amount of space as the distance between Saturn and our Sun. Such tight living quarters throw theories of hot Jupiter formation into question. Astronomers had thought that hot Jupiters formed far away from their parent stars, before migrating inward.

"In this close-knit system, there would be no room at the outskirts of the parent star system for a planet to grow," said Konacki.

Previously, astronomers had identified planets around about 20 binary stars and one set of triple stars. But the stars in those systems had a lot of space between them. Most multiple-star arrangements are crowded together and difficult to study.

Konacki overcame this challenge using a modified version of the radial velocity, or "wobble," planet-hunting technique. In the traditional wobble method, a planet's presence is inferred by the gravitational tug, or wobble, it induces in its parent star. The strategy works well for single stars or far-apart binary and triple stars, but could not be applied to close-star systems because the stars' light blends together.

By developing detailed models of close-star systems, Konacki was able to tease apart the tangled starlight. This allowed him to pinpoint, for the first time, the tug of a planet on a star snuggled next to other stars. Of 20 systems examined so far, HD 188753, located 149 light-years away, was the only one found to harbor a planet.

Hot Jupiters are believed to form out of thick disks, or "doughnuts," of material that swirl around the outer fringes of young stars. The disk material clumps together to form a solid core, then pulls gas onto it. Eventually, the gas giant drifts inward. The discovery of a world under three suns contradicts this scenario. HD 188753 would have sported a truncated disk in its youth, due to the disruptive presence of its stellar companions. That leaves no room for HD 188753's planet to form, and raises a host of new questions.

The masses of the three stars in HD 188753 system range from two-thirds to about the same mass as our Sun. The planet is slightly more massive than Jupiter.

For artist's concepts and other graphics, visit http://planetquest.jpl.nasa.gov/ . For information about NASA and agency programs on the Web, visit http://www.nasa.gov/home/index.html .
+ Related images and animations