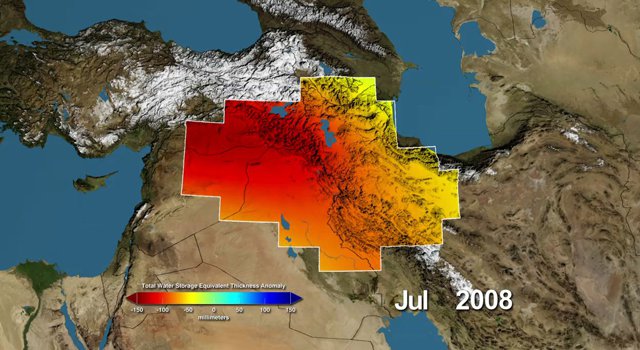 Variations in total water storage from normal, in millimeters, in the Tigris and Euphrates river basins, as measured by NASA's Gravity Recovery and Climate Experiment (GRACE) satellites, from January 2003 through December 2009. Reds represent drier conditions, while blues represent wetter conditions. The majority of the water lost was due to reductions in groundwater caused by human activities. By periodically measuring gravity regionally, GRACE tells scientists how much water storage changes over time.
Credit: NASA/UC Irvine/NCAR

A new study from a pair of gravity-measuring NASA satellites finds that large parts of the arid Middle East region lost freshwater reserves rapidly during the past decade.

PASADENA, Calif. - A new study using data from a pair of gravity-measuring NASA satellites finds that large parts of the arid Middle East region lost freshwater reserves rapidly during the past decade.

Scientists at the University of California, Irvine; NASA's Goddard Space Flight Center in Greenbelt, Md.; and the National Center for Atmospheric Research in Boulder, Colo., found during a seven-year period beginning in 2003 that parts of Turkey, Syria, Iraq and Iran along the Tigris and Euphrates river basins lost 117 million acre feet (144 cubic kilometers) of total stored freshwater. That is almost the amount of water in the Dead Sea. The researchers attribute about 60 percent of the loss to pumping of groundwater from underground reservoirs.

The findings, to be published Friday, Feb. 15, in the journal Water Resources Research, are the result of one of the first comprehensive hydrological assessments of the entire Tigris-Euphrates-Western Iran region. Because obtaining ground-based data in the area is difficult, satellite data, such as those from NASA's twin Gravity Recovery and Climate Experiment (GRACE) satellites, are essential. GRACE is providing a global picture of water storage trends and is invaluable when hydrologic observations are not routinely collected or shared beyond political boundaries.

"GRACE data show an alarming rate of decrease in total water storage in the Tigris and Euphrates river basins, which currently have the second fastest rate of groundwater storage loss on Earth, after India," said Jay Famiglietti, principal investigator of the study and a hydrologist and professor at UC Irvine. "The rate was especially striking after the 2007 drought. Meanwhile, demand for freshwater continues to rise, and the region does not coordinate its water management because of different interpretations of international laws."

Famiglietti said GRACE is like having a giant scale in the sky. Within a given region, rising or falling water reserves alter Earth's mass, influencing how strong the local gravitational attraction is. By periodically measuring gravity regionally, GRACE tells us how much each region's water storage changes over time.

"GRACE really is the only way we can estimate groundwater storage changes from space right now," Famiglietti said.

The team calculated about one-fifth of the observed water losses resulted from soil drying up and snowpack shrinking, partly in response to the 2007 drought. Loss of surface water from lakes and reservoirs accounted for about another fifth of the losses. The majority of the water lost -- approximately 73 million acre feet (90 cubic kilometers) -- was due to reductions in groundwater.

"That's enough water to meet the needs of tens of millions to more than a hundred million people in the region each year, depending on regional water use standards and availability," said Famiglietti.

Famiglietti said when a drought reduces an available surface water supply, irrigators and other water users turn to groundwater supplies. For example, the Iraqi government drilled about 1,000 wells in response to the 2007 drought, a number that does not include the numerous private wells landowners also very likely drilled.

"Water management is a complex issue in the Middle East -- an area that already is dealing with limited water resources and competing stakeholders," said Kate Voss, lead author of the study and a water policy fellow with the University of California's Center for Hydrological Modeling in Irvine, which Famiglietti directs.

"The Middle East just does not have that much water to begin with, and it's a part of the world that will be experiencing less rainfall with climate change," said Famiglietti. "Those dry areas are getting dryer. The Middle East and the world's other arid regions need to manage available water resources as best they can."

Study co-author Matt Rodell of Goddard added it is important to remember groundwater is being extracted unsustainably in parts of the United States, as well.

"Groundwater is like your savings account," Rodell said. "It's okay to draw it down when you need it, but if it's not replenished, eventually it will be gone."

GRACE is a joint mission with the German Aerospace Center and the German Research Center for Geosciences, in partnership with the University of Texas at Austin. NASA's Jet Propulsion Laboratory, Pasadena, Calif., developed the GRACE spacecraft and manages the mission for NASA's Science Mission Directorate, Washington. For more about GRACE, visit: http://www.nasa.gov/grace and http://www.csr.utexas.edu/grace . The California Institute of Technology in Pasadena manages JPL for NASA