NASA Satellite Spots a Mystery That's Gone in a Flash 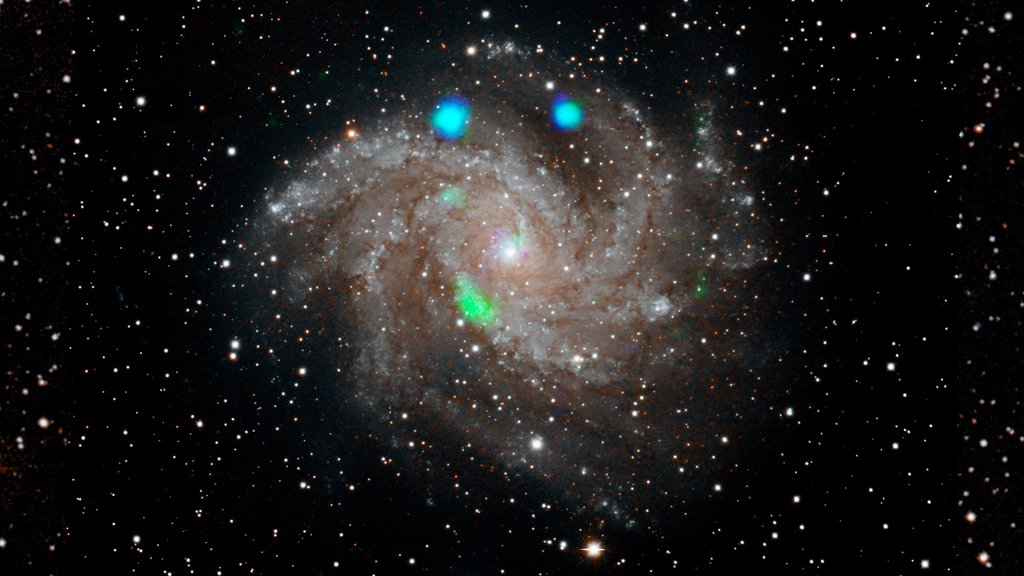 This visible-light image of the Fireworks galaxy (NGC 6946) comes from the Digital Sky Survey, and is overlaid with data from NASA's NuSTAR observatory (in blue and green).
Credit: NASA/JPL-Caltech

NASA's NuSTAR X-ray observatory saw a flash of light that could be produced only by an extremely energetic event. Scientists are investigating what could have caused the flare.

Pops of bright blue and green in this image of the Fireworks galaxy (NGC 6946) show the locations of extremely bright sources of X-ray light captured by NASA's NuSTAR space observatory. Generated by some of the most energetic processes in the universe, these X-ray sources are rare compared to the many visible light sources in the background image. A new study, published in the Astrophysical Journal, offers some possible explanations for the surprise appearance of the green source near the center of the galaxy, which came into view and disappeared in a matter of weeks.

The primary objective of the NuSTAR observations was to study the supernova - the explosion of a star much more massive than our Sun - that appears as a bright blue-green spot at upper right. These violent events can briefly produce enough visible light to outshine entire galaxies consisting of billions of stars. They also generate many of the chemical elements in our universe that are heavier than iron.

The green blob near the bottom of the galaxy wasn't visible during the first NuSTAR observation but was burning bright at the start of a second observation 10 days later. NASA's Chandra X-ray Observatory later observed that the source - known as an ultraluminous X-ray source, or ULX - had disappeared just as quickly. The object has since been named ULX-4 because it is the fourth ULX identified in this galaxy. No visible light was detected with the X-ray source, a fact that most likely rules out the possibility that it is also a supernova.

"Ten days is a really short amount of time for such a bright object to appear," said Hannah Earnshaw, a postdoctoral researcher at Caltech in Pasadena, California, and lead author on the new study. "Usually with NuSTAR, we observe more gradual changes over time, and we don't often observe a source multiple times in quick succession. In this instance, we were fortunate to catch a source changing extremely quickly, which is very exciting."

The new study explores the possibility that the light came from a black hole consuming another object, such as a star. If an object gets too close to a black hole, gravity can pull that object apart, bringing the debris into a close orbit around the black hole. Material at the inner edge of this newly formed disk starts moving so fast that it heats up to millions of degrees and radiates X-rays. (The surface of the Sun, by comparison, is about 10,000 degrees Fahrenheit, or 5,500 degrees Celsius.)

Most ULXs are typically long-lived because they're created by a dense object, like a black hole, that "feeds" on the star for an extended period of time. Short-lived, or "transient," X-ray sources like ULX-4 are far more rare, so a single dramatic event - like a black hole quickly destroying a small star - might explain the observation.

However, ULX-4 might not be a one-off event, and the paper's authors explored other potential explanations for this object. One possibility: The source of ULX-4 could be a neutron star. Neutron stars are extremely dense objects formed from the explosion of a star that wasn't massive enough to form a black hole. With about the same mass as our Sun but packed into an object about the size of a large city, neutron stars can, like black holes, draw in material and create a fast-moving disk of debris. These can also generate slow-feeding ultraluminous X-ray sources, although the X-ray light is produced through slightly different processes than in ULXs created by black holes.

Neutron stars generate magnetic fields so strong they can create "columns" that channel material down to the surface, generating powerful X-rays in the process. But if the neutron star spins especially fast, those magnetic fields can create a barrier, making it impossible for material to reach the star's surface.

"It would kind of be like trying to jump onto a carousel that's spinning at thousands of miles per hour," said Earnshaw.

The barrier effect would prevent the star from being a bright source of X-rays except for those times when the magnetic barrier might waver briefly, allowing material to slip through and fall onto the neutron star's surface. This could be another possible explanation for the sudden appearance and disappearance of ULX-4. If the same source were to light up again, it might support this hypothesis.

"This result is a step towards understanding some of the rarer and more extreme cases in which matter accretes onto black holes or neutron stars," Earnshaw said.

NuSTAR is a Small Explorer mission led by Caltech and managed by JPL for NASA's Science Mission Directorate in Washington. NuSTAR was developed in partnership with the Danish Technical University and the Italian Space Agency (ASI). The spacecraft was built by Orbital Sciences Corp. in Dulles, Virginia. NuSTAR's mission operations center is at the University of California Berkeley, and the official data archive is at NASA's High Energy Astrophysics Science Archive Research Center. ASI provides the mission's ground station and a mirror archive. Caltech manages JPL for NASA.