NASA Satellite Set to Get the Dirt on Soil Moisture 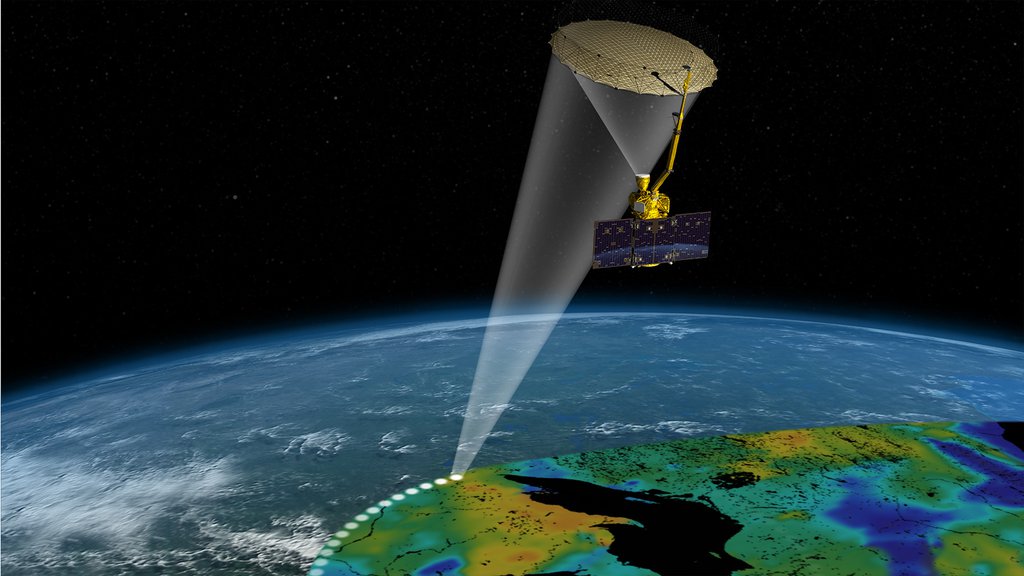 A new NASA satellite that will peer into the topmost layer of Earth's soils to measure the hidden waters that influence our climate is in final preparations for a Jan. 29 launch.

A new NASA satellite that will peer into the topmost layer of Earth's soils to measure the hidden waters that influence our weather and climate is in final preparations for a Jan. 29 dawn launch from California.

The Soil Moisture Active Passive (SMAP) mission will take the pulse of a key measure of our water planet: how freshwater cycles over Earth's land surfaces in the form of soil moisture. The mission will produce the most accurate, highest-resolution global maps ever obtained from space of the moisture present in the top 2 inches (5 centimeters) of Earth's soils. It also will detect and map whether the ground is frozen or thawed. This data will be used to enhance scientists' understanding of the processes that link Earth's water, energy and carbon cycles.

"With data from SMAP, scientists and decision makers around the world will be better equipped to understand how Earth works as a system and how soil moisture impacts a myriad of human activities, from floods and drought to weather and crop yield forecasts," said Christine Bonniksen, SMAP program executive with the Science Mission Directorate's Earth Science Division at NASA Headquarters in Washington. "SMAP's global soil moisture measurements will provide a new capability to improve our understanding of Earth's climate."

Globally, the volume of soil moisture varies between three and five percent in desert and arid regions, to between 40 and 50 percent in saturated soils. In general, the amount depends on such factors as precipitation patterns, topography, vegetation cover and soil composition. There are not enough sensors in the ground to map the variability in global soil moisture at the level of detail needed by scientists and decision makers. From space, SMAP will produce global maps with 6-mile (10-kilometer) resolution every two to three days.

Researchers want to measure soil moisture and its freeze/thaw state better for numerous reasons. Plants and crops draw water from the soil through their roots to grow. If soil moisture is inadequate, plants fail to grow, which over time can lead to reduced crop yields. Also, energy from the sun evaporates moisture in the soil, thereby cooling surface temperatures and also increasing moisture in the atmosphere, allowing clouds and precipitation to form more readily. In this way, soil moisture has a significant effect on both short-term regional weather and longer-term global climate.

In summer, plants in Earth's northern boreal regions -- the forests found in Earth's high northern latitudes -- take in carbon dioxide from the air and use it to grow, but lay dormant during the winter freeze period. All other factors being equal, the longer the growing season, the more carbon plants take in and the more effective forests are in removing carbon dioxide from the air. Since the start of the growing season is marked by the thawing and refreezing of water in soils, mapping the freeze/thaw state of soils with SMAP will help scientists more accurately account for how much carbon plants are removing from the atmosphere each year. This information will lead to better estimates of the carbon budget in the atmosphere and, hence, better assessments of future global warming.

SMAP data will enhance our confidence in projections of how Earth's water cycle will respond to climate change.

SMAP also will advance our ability to monitor droughts, predict floods and mitigate the related impacts of these extreme events. It will allow the monitoring of regional deficits in soil moisture and provide critical inputs into drought monitoring and early warning systems used by resource managers. The mission's high-resolution observations of soil moisture will improve flood warnings by providing information on ground saturation conditions before rainstorms.

SMAP's two advanced instruments work together to produce soil moisture maps. Its active radar works much like a flash camera, but instead of transmitting visible light, it transmits microwave pulses that pass through clouds and moderate vegetation cover to the ground and measures how much of that signal is reflected back. Its passive radiometer operates like a natural-light camera, capturing emitted microwave radiation without transmitting a pulse. Unlike traditional cameras, however, SMAP's images are in the microwave range of the electromagnetic spectrum, which is invisible to the naked eye. Microwave radiation is sensitive to how much moisture is contained in the soil.

The two instruments share a large, lightweight reflector antenna that will be unfurled in orbit like a blooming flower and then spin at about 14 revolutions per minute. The antenna will allow the instruments to collect data across a 621-mile (1,000-kilometer) swath, enabling global coverage every two to three days.

SMAP will launch from Vandenberg Air Force Base on a United Launch Alliance Delta II rocket and maneuver into a 426-mile (685-kilometer) altitude, near-polar orbit that repeats exactly every eight days. The mission is designed to operate at least three years.

SMAP will be the fifth NASA Earth science mission to launch within a 12-month period. NASA monitors Earth's vital signs from land, air and space with a fleet of satellites and ambitious airborne and ground-based observation campaigns. NASA develops new ways to observe and study Earth's interconnected natural systems with long-term data records and computer analysis tools to better see how our planet is changing.