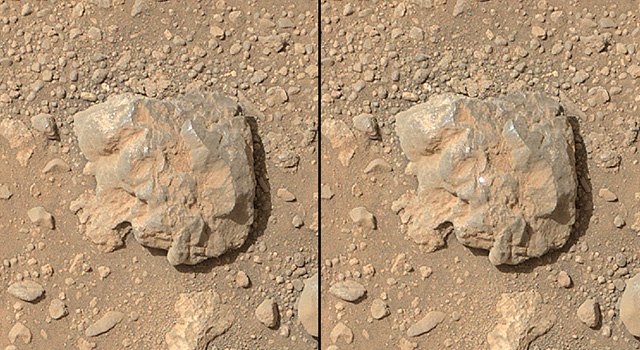 NASA's Curiosity Mars rover used the Mars Hand Lens Imager (MAHLI) camera on its arm to catch the first images of sparks produced by the rover's laser being shot at a rock on Mars.› Full image and caption
Credit: NASA/JPL-Caltech/MSSS 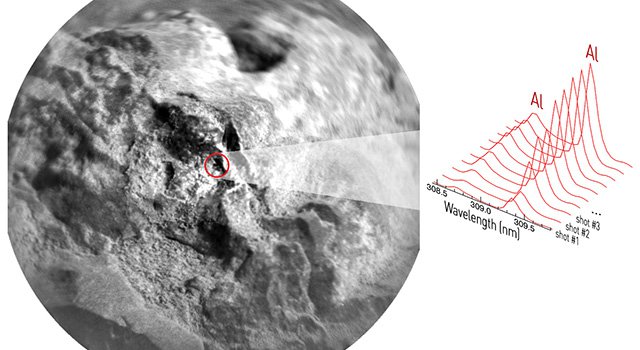 A Martian target rock called "Nova," shown here, displayed an increasing concentration of aluminum as a series of laser shots from NASA's Curiosity Mars rover penetrated through dust on the rock's surface. This pattern is typical of many rocks examined with the rover's laser-firing ChemCam.› Full image and caption
Credit: NASA/JPL-Caltech/LANL/CNES/IRAP/LPGNantes/CNRS/IAS

NASA's Curiosity Mars rover has caught the first images of sparks on a Martian rock that result from the rover's laser instrument examining the rock.

Flashes appear on a baseball-size Martian rock in a series of images taken Saturday, July 12 by the Mars Hand Lens Imager (MAHLI) camera on the arm of NASA's Curiosity Mars Rover. The flashes occurred while the rover's Chemistry and Camera (ChemCam) instrument fired multiple laser shots to investigate the rock's composition.

The images, strung together as a video, are available online at:

ChemCam's laser has zapped more than 600 rock and soil targets on Mars since Curiosity landed in the planet's Gale Crater in August 2012.

"This is so exciting! The ChemCam laser has fired more than 150,000 times on Mars, but this is the first time we see the plasma plume that is created," said ChemCam Deputy Principal Investigator Sylvestre Maurice, at the Research Institute in Astrophysics and Planetology, of France's National Center for Scientific Research and the University of Toulouse, France. "Each time the laser hits a target, the plasma light is caught and analyzed by ChemCam's spectrometers. What the new images add is confirmation that the size and shape of the spark are what we anticipated under Martian conditions."

Preliminary analysis of the ChemCam spectra from this target rock, appropriately named "Nova," indicates a composition rich in silicon, aluminum and sodium, beneath a dust layer poor in those elements. This is typical of rocks that Curiosity is encountering on its way toward Mount Sharp.

MAHLI Deputy Principal Investigator Aileen Yingst of the Planetary Science Institute, Tucson, Arizona, said, "One of the reasons we took these images is that they allow the ChemCam folks to compare the plume to those they imaged on Earth. Also, MAHLI has captured images of other activities of Curiosity, for documentation purposes, and this was an opportunity to document the laser in action."