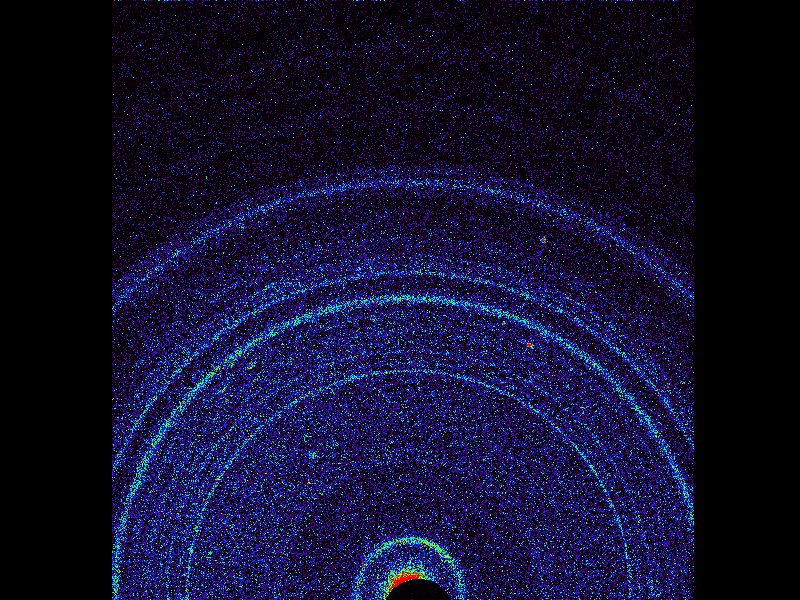 This graphic shows results of the first analysis of Martian soil by the Chemistry and Mineralogy (CheMin) experiment on NASA's Curiosity rover. The image reveals the presence of crystalline feldspar, pyroxenes and olivine mixed with some amorphous (non-crystalline) material. The soil sample, taken from a wind-blown deposit within Gale Crater, where the rover landed, is similar to volcanic soils in Hawaii. The colors in the graphic represent the intensity of the X-rays, with red being the most intense.› Full image and caption
Credit: NASA/JPL-Caltech/Ames 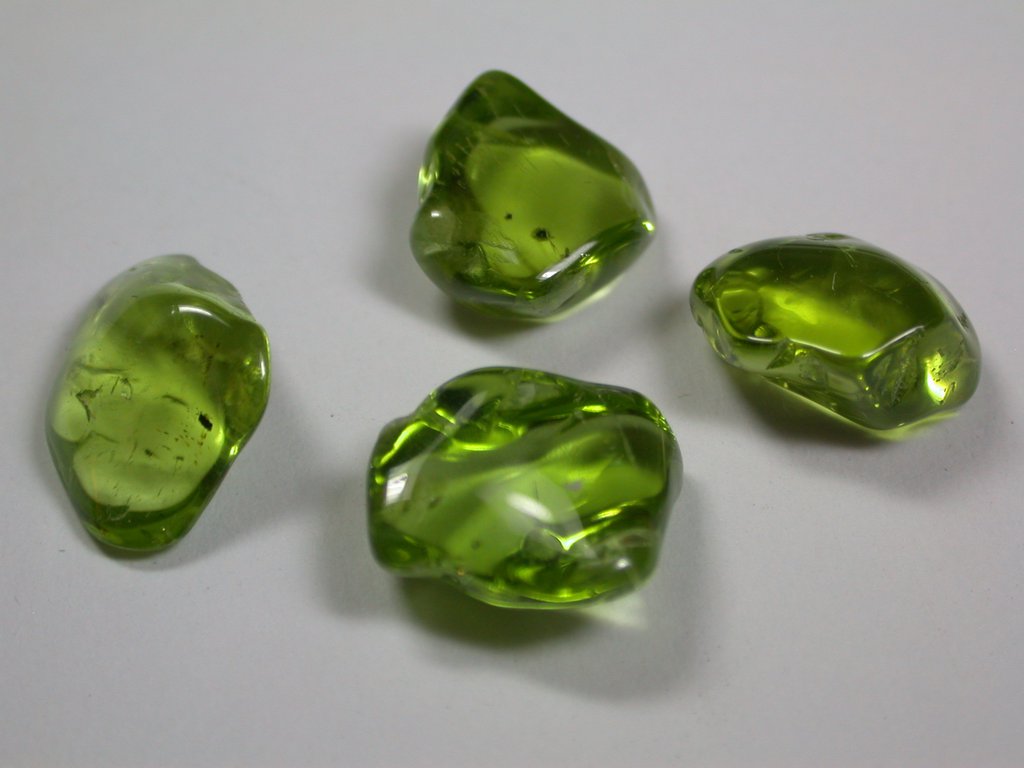 The Martian soil examined by the Chemistry and Mineralogy (CheMin) instrument on NASA's Curiosity rover shows the diffraction signature, or "fingerprint," of the mineral olivine, shown here on Earth in the form of tumbled crystals about a quarter-inch (several millimeters) in size. The semi-precious gem peridot is a variety of olivine.› Full image and caption
Credit: Caltech 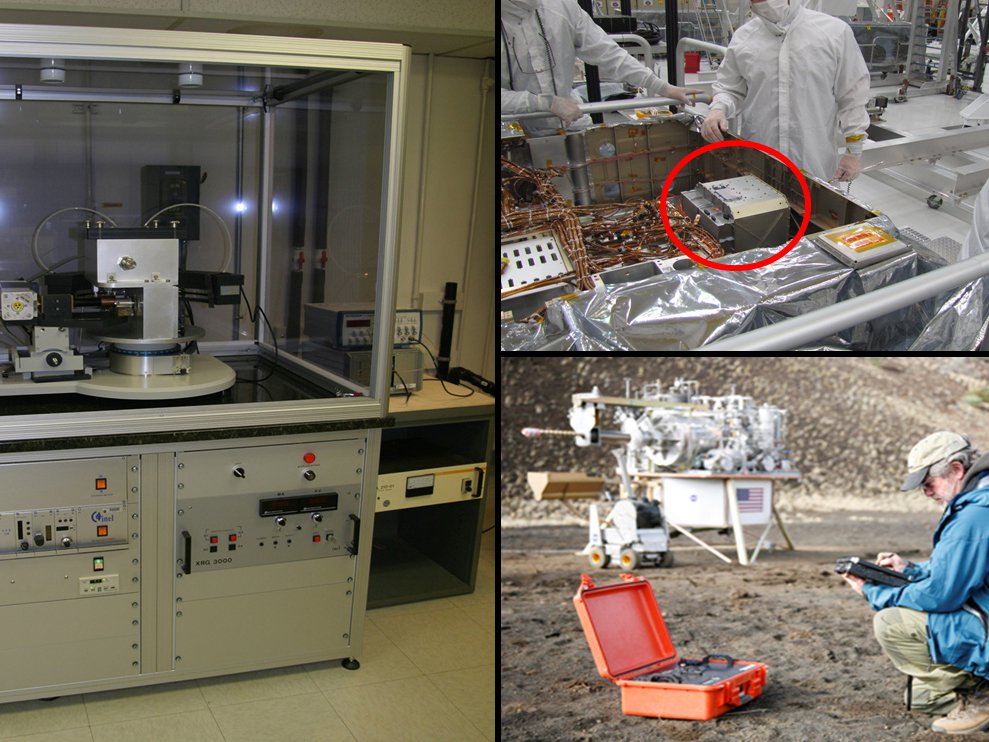 A conventional X-ray diffraction instrument (left) is the size of a large refrigerator, in contrast to the compact size of the Chemistry and Mineralogy (CheMin) instrument on NASA's Curiosity rover (top right) and the spin-off commercial portable instrument (lower right, orange case). Both of the more compact X-ray diffraction instruments were made possible by NASA technology innovations. The CheMin instrument is a cube of about 10 inches (25 centimeters) on each side. It is shown here in the red circle as technicians install it on the rover in the cleanroom at NASA's Jet Propulsion Laboratory, Pasadena, Calif.› Full image and caption
Credit: NASA/Ames/JPL-Caltech 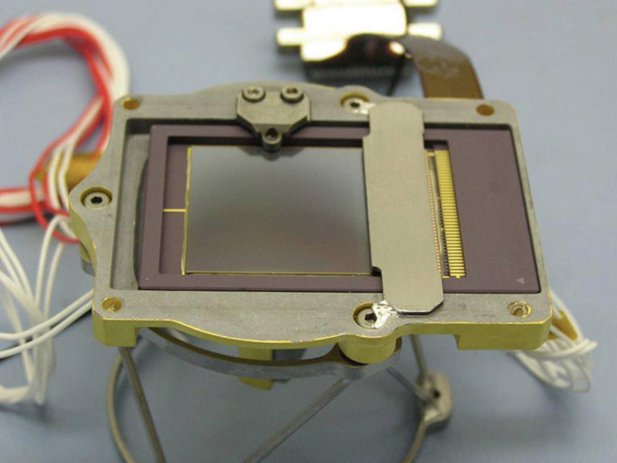 This charged couple device (CCD) is part of the Chemistry and Mineralogy (CheMin) instrument on NASA's Curiosity rover. When CheMin directs X-rays at a sample of soil, this imager, which is the size of a postage stamp, detects both the position and energy of each X-ray photon. The technology in this CCD was originally developed by NASA and has become widely used in commercial digital cameras.› Full image and caption
Credit: NASA/Ames/JPL-Caltech 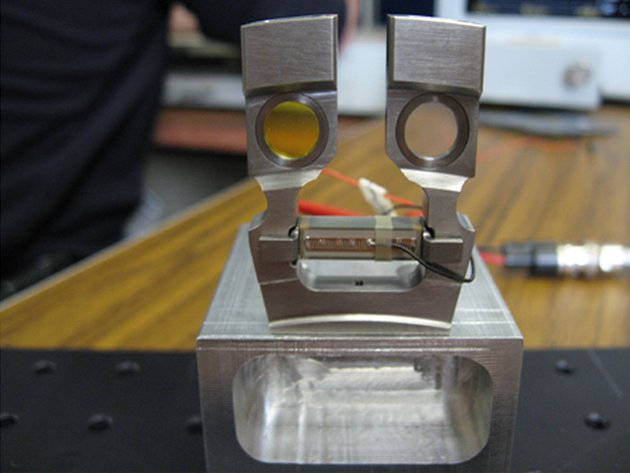 This image shows the cells that hold the soil samples that are vibrated by the Chemistry and Mineralogy (CheMin) instrument on NASA's Curiosity rover.› Full image and caption
Credit: NASA/Ames/JPL-Caltech 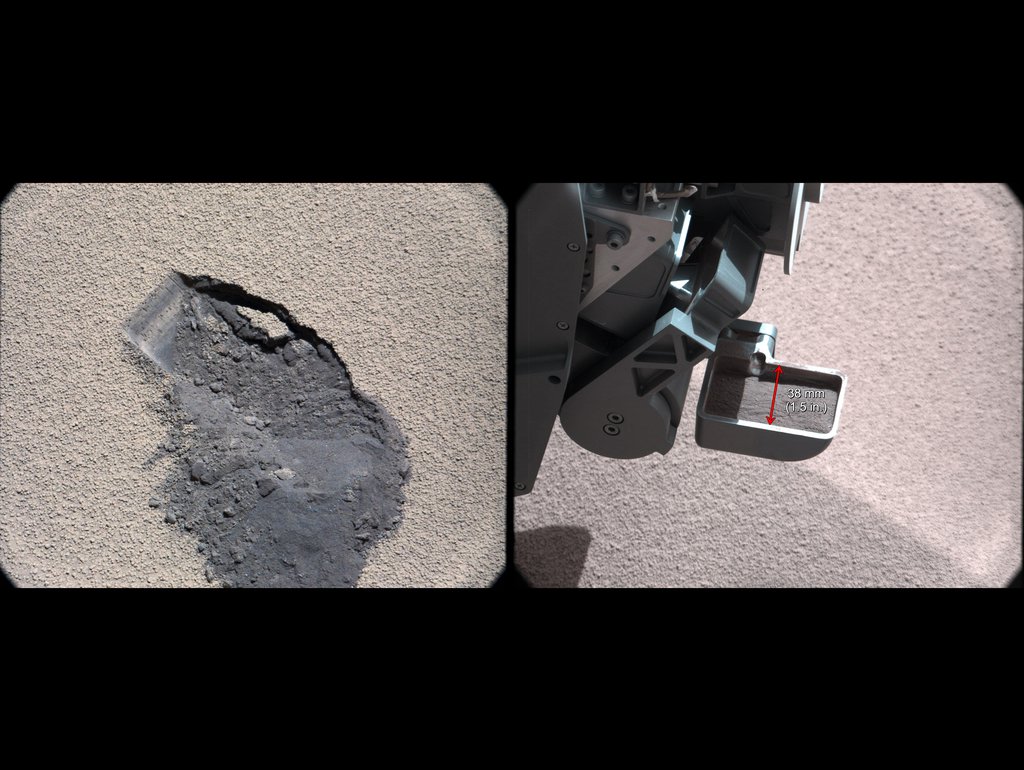 This pair of images shows a "bite mark" where NASA's Curiosity rover scooped up some Martian soil (left), and the scoop carrying soil. The first scoop sample was taken from the "Rocknest" patch of dust and sand on Oct. 7, 2012, the 61st sol, or Martian day, of operations. A third scoop sample was collected on Oct. 15, or Sol 69, and deposited into the Chemistry and Mineralogy (CheMin) instrument on Oct. 17, or Sol 71.
Credit: NASA/JPL-Caltech/MSSS

The minerals were identified in the first sample of Martian soil ingested recently by the rover. Curiosity used its Chemistry and Mineralogy instrument (CheMin) to obtain the results, which are filling gaps and adding confidence to earlier estimates of the mineralogical makeup of the dust and fine soil widespread on the Red Planet.

"We had many previous inferences and discussions about the mineralogy of Martian soil," said David Blake of NASA Ames Research Center in Moffett Field, Calif., who is the principal investigator for CheMin. "Our quantitative results provide refined and in some cases new identifications of the minerals in this first X-ray diffraction analysis on Mars."

The identification of minerals in rocks and soil is crucial for the mission's goal to assess past environmental conditions. Each mineral records the conditions under which it formed. The chemical composition of a rock provides only ambiguous mineralogical information, as in the textbook example of the minerals diamond and graphite, which have the same chemical composition, but strikingly different structures and properties.

CheMin uses X-ray diffraction, the standard practice for geologists on Earth using much larger laboratory instruments. This method provides more accurate identifications of minerals than any method previously used on Mars. X-ray diffraction reads minerals' internal structure by recording how their crystals distinctively interact with X-rays. Innovations from Ames led to an X-ray diffraction instrument compact enough to fit inside the rover.

These NASA technological advances have resulted in other applications on Earth, including compact and portable X-ray diffraction equipment for oil and gas exploration, analysis of archaeological objects and screening of counterfeit pharmaceuticals, among other uses.

"Our team is elated with these first results from our instrument," said Blake. "They heighten our anticipation for future CheMin analyses in the months and miles ahead for Curiosity."

The specific sample for CheMin's first analysis was soil Curiosity scooped up at a patch of dust and sand that the team named Rocknest. The sample was processed through a sieve to exclude particles larger than 0.006 inch (150 micrometers), roughly the width of a human hair. The sample has at least two components: dust distributed globally in dust storms and fine sand originating more locally. Unlike conglomerate rocks Curiosity investigated a few weeks ago, which are several billion years old and indicative of flowing water, the soil material CheMin has analyzed is more representative of modern processes on Mars.

"Much of Mars is covered with dust, and we had an incomplete understanding of its mineralogy," said David Bish, CheMin co-investigator with Indiana University in Bloomington. "We now know it is mineralogically similar to basaltic material, with significant amounts of feldspar, pyroxene and olivine, which was not unexpected. Roughly half the soil is non-crystalline material, such as volcanic glass or products from weathering of the glass. "

Bish said, "So far, the materials Curiosity has analyzed are consistent with our initial ideas of the deposits in Gale Crater recording a transition through time from a wet to dry environment. The ancient rocks, such as the conglomerates, suggest flowing water, while the minerals in the younger soil are consistent with limited interaction with water."

During the two-year prime mission of the Mars Science Laboratory Project, researchers are using Curiosity's 10 instruments to investigate whether areas in Gale Crater ever offered environmental conditions favorable for microbial life.

For more information about a commercial application of the CheMin technology, visit: http://blogs.getty.edu/iris/mars-rover-technology-helps-unlock-art-mysteries/ .