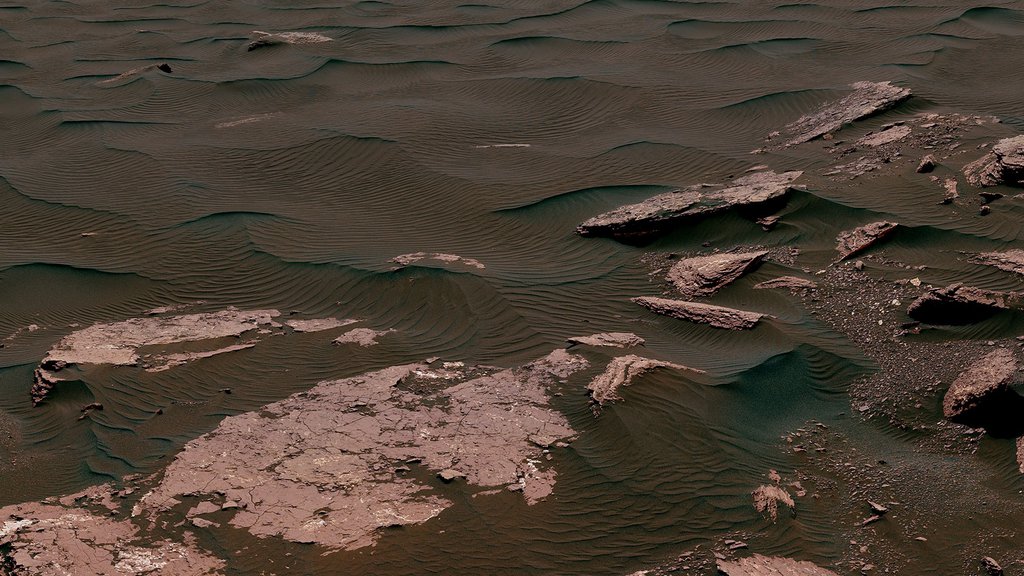 This view from the Mast Camera (Mastcam) on NASA's Curiosity Mars rover shows two scales of ripples, plus other textures, in an area where the mission examined a linear-shaped dune in the Bagnold dune field on lower Mount Sharp in March and April 2017.› Full image and caption
Credit: NASA/JPL-Caltech/MSSS 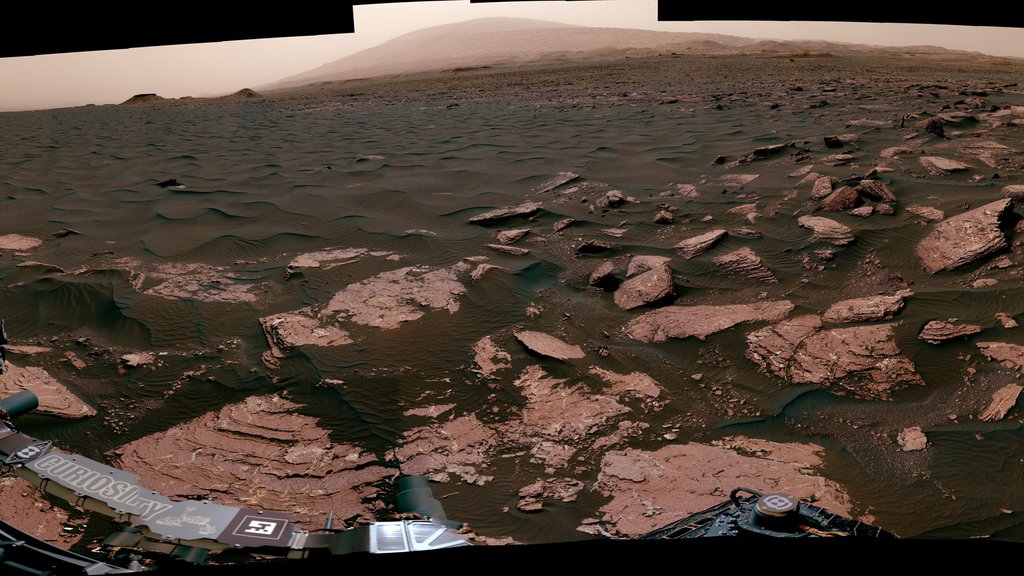 This 360-degree scene from the Mastcam on NASA's Curiosity Mars rover includes part of a linear-shaped dune the rover examined in early 2017 for comparison with what it found previously at crescent-shaped dunes.› Full image and caption
Credit: NASA/JPL-Caltech/MSSS

As it drives uphill from a band of rippled sand dunes, NASA's Curiosity Mars rover is toting a fistful of dark sand for onboard analysis that will complete its investigation of those dunes.

As it drives uphill from a band of rippled sand dunes, NASA's Curiosity Mars rover is toting a fistful of dark sand for onboard analysis that will complete the rover's investigation of those dunes.

From early February to early April, the rover examined four sites near a linear dune for comparison with what it found in late 2015 and early 2016 during its investigation of crescent-shaped dunes. This two-phase campaign is the first close-up study of active dunes anywhere other than Earth.

Among the questions this Martian dune campaign is addressing is how winds shape dunes that are relatively close together, on the same side of the same mountain, into different patterns. Others include whether Martian winds sort grains of sand in ways that affect the distribution of mineral compositions, which would have implications for studies of Martian sandstones.

"At these linear dunes, the wind regime is more complicated than at the crescent dunes we studied earlier," said Mathieu Lapotre of Caltech, in Pasadena, California, who helped lead the Curiosity science team's planning for the dune campaign. "There seems to be more contribution from the wind coming down the slope of the mountain here compared with the crescent dunes farther north."

The linear dunes lie uphill and about a mile (about 1.6 kilometers) south from the crescent dunes. Both study locations are part of a dark-sand swath called the Bagnold Dunes, which stretches several miles in length. This dune field lines the northwestern flank of Mount Sharp, the layered mountain that Curiosity is climbing.

To assess wind strength and direction, the rover team now uses change-detection pairs of images taken at different times to check for movement of sand grains. The wind-sensing capability of the Curiosity's Rover Environmental Monitoring Station (REMS) is no longer available, though that instrument still returns other Mars-weather data daily, such as temperatures, humidity and pressure. Two of the six wind sensors on the rover's mast were found to be inoperable upon landing on Mars in 2012. The remainder provided wind information throughout the rover's prime mission and first two-year extended mission.

A sample of sand that Curiosity scooped up from a linear dune is in the sample-handling device at the end of the rover's arm. One portion has been analyzed in the Sample Analysis at Mars (SAM) instrument inside the rover. The science team plans to deliver additional sample portions to SAM and to the rover's Chemistry and Mineralogy (CheMin) instrument.

One factor in choosing to drive farther uphill before finishing analysis of the scooped sand is the status of Curiosity's rock-sampling drill, which has not been used on a rock since a problem with the drill feed mechanism appeared five months ago. Engineers are assessing how the use of vibration to deliver samples may affect the drill feed mechanism, which is used to move the drill bit forward and backwards. In addition, high winds at the linear-dunes location were complicating the process of pouring sample material into the entry ports for the laboratory instruments.

"A balky brake appears to be affecting drill feed mechanism performance," said Curiosity Deputy Project Manager Steven Lee, of NASA's Jet Propulsion Laboratory, Pasadena, California. "In some cases, vibration has been observed to change feed effectiveness, so we're proceeding cautiously until we better understand the behavior. In the meantime, the engineering team is developing several methods to improve feed reliability."

Curiosity landed near Mount Sharp in August 2012. It reached the base of the mountain in 2014 after successfully finding evidence on the surrounding plains that ancient Martian lakes offered conditions that would have been favorable for microbes if Mars has ever hosted life. Rock layers forming the base of Mount Sharp accumulated as sediment within ancient lakes billions of years ago.

On Mount Sharp, Curiosity is investigating how and when the ancient habitable conditions known from the mission's earlier findings evolved into drier conditions that were less favorable for life. For more information about Curiosity, visit: