NASA Rover Gets Movie as a Mars Moon Passes Another 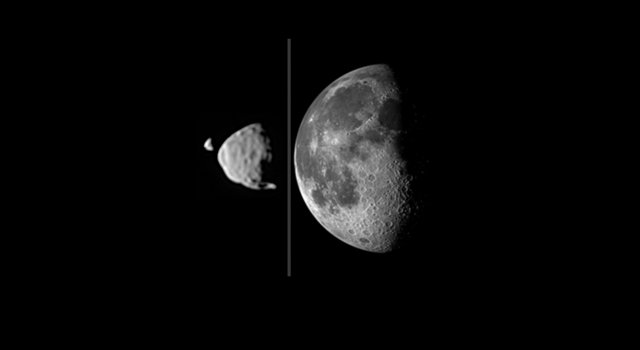 This illustration provides a comparison for how big the moons of Mars appear to be, as seen from the surface of Mars, in relation to the size that Earth's moon appears to be when seen from the surface of Earth. Earth's moon actually has a diameter more than 100 times greater than the larger Martian moon, Phobos. However, the Martian moons orbit much closer to their planet than the distance between Earth and Earth's moon.› Full image and caption
Credit: NASA/JPL-Caltech/Malin Space Science Systems/Texas A&amp;M Univ. 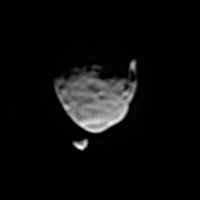 This view of the two moons of Mars comes from a set of images taken by NASA's Mars rover Curiosity as the larger moon, Phobos, passed in front of the smaller one, Deimos, from Curiosity's perspective, on Aug. 1, 2013.
Credit: NASA/JPL-Caltech/Malin Space Science Systems/Texas A&amp;M Univ.

The larger of the two moons of Mars, Phobos, passes directly in front of the other, Deimos, in a new series of sky-watching images from NASA's Mars rover Curiosity.

PASADENA, Calif. -- The larger of the two moons of Mars, Phobos, passes directly in front of the other, Deimos, in a new series of sky-watching images from NASA's Mars rover Curiosity.

A video clip assembled from the images is at http://youtu.be/DaVSCmuOJwI .

Large craters on Phobos are clearly visible in these images from the surface of Mars. No previous images from missions on the surface caught one moon eclipsing the other.

The telephoto-lens camera of Curiosity's two-camera Mast Camera (Mastcam) instrument recorded the images on Aug. 1. Some of the full-resolution frames were not downlinked until more than a week later, in the data-transmission queue behind higher-priority images being used for planning the rover's drives.

These observations of Phobos and Deimos help researchers make knowledge of the moons' orbits even more precise.

"The ultimate goal is to improve orbit knowledge enough that we can improve the measurement of the tides Phobos raises on the Martian solid surface, giving knowledge of the Martian interior," said Mark Lemmon of Texas A&M University, College Station. He is a co-investigator for use of Curiosity's Mastcam. "We may also get data good enough to detect density variations within Phobos and to determine if Deimos' orbit is systematically changing."

Lemmon and colleagues determined that the two moons would be visible crossing paths at a time shortly after Curiosity would be awake for transmitting data to NASA's Mars Reconnaissance Orbiter for relay to Earth. That made the moon observations feasible with minimal impact on the rover's energy budget.

Although Phobos has a diameter less than one percent the diameter of Earth's moon, Phobos also orbits much closer to Mars than our moon's distance from Earth. As seen from the surface of Mars, Phobos looks about half as wide as what Earth's moon looks like to viewers on Earth.